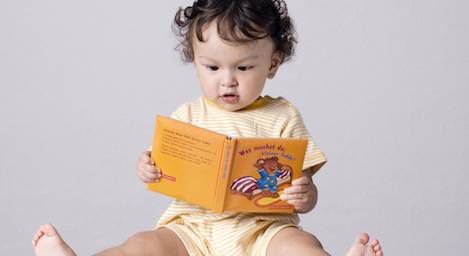 Here’s one of the things I don’t understand about publishing: how is it that some books are so sought-after, but no publishing house is printing them? A job perk to working in a used bookstore is discovering hidden gems that you just can’t find on the shelves of a new bookstore. Some of them come in sandwiched between more common books while book buying. Others, though, only make their way through word of mouth. These mythical books are frequently asked for by customers, but despite the thousands of books we receive in a month, they rarely–if ever!–surface in those buys.

Luckily, this isn’t always the case. Some of these out-of-print treasures still circulate in used bookstores, but they’re snapped up as soon as they’re turned in. A few of these titles I’ve been able to flip through, and I can see why people remember them from their childhoods and seek them out decades later. Others I know solely by word of mouth, and I can only vouch for the quality by saying many more people ask for these books than trade them in. 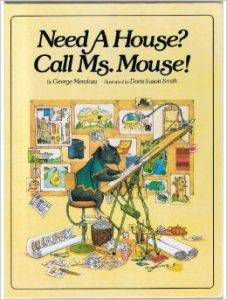 This is one of those mysterious books I haven’t (yet) seen in person, but with a little googling I can see why people love this. It’s about a tiny mouse architect, and features illustrations of what different animals would want from their dream homes! Check out this Slate article for more information about the book and illustrations from it, including the changes made between the Australian and American editions. 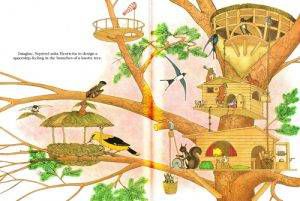 8. Trouble for Trumpets by Peter Dall 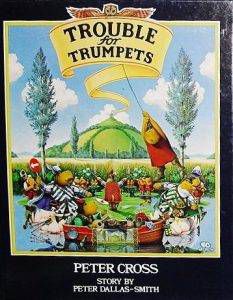 Shh, don’t tell the people on the request list, but we actually just received this book for the first time and it’s waiting to be priced and then set aside for the first person who asked us for it (5 years ago!) In the meantime, though, I’ll have to look through it, because it looks like the appeal of this is the intricate illustrations. The story follows the conflict between the peaceful Trumpets and the warlike Grumpets, told in the loose form of a calendar and inspired by the British countryside. To see more of the illustrations, check out Peter Cross’s website. 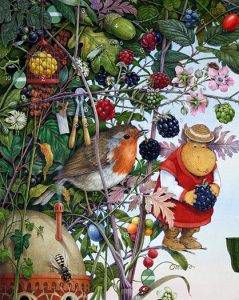 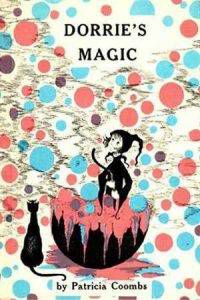 I wish I had the chance to see these in person, because they seem exactly my style. The illustrations change throughout the series, but the simple colours combined with the cluttered backgrounds are charming, and so is little Dorrie: She is a witch. A little witch. Her hat is always on crooked and her stockings never match. Besides, the idea of someone with magic who, regardless, can’t seem to figure things out, and who is still learning how to manage in the great big world is immediately appealing to kids and adults. This looks like a perfect Halloween read.

Amazon seems to be offering this as a print-on-demand paperback, which is something, but it looks like the quality is not up to the originals. (Often print-on-demand books are photocopies of the original pages, which can be blurry.) Check out more illustrations from this series at Harriet Muncaster Illustrations. 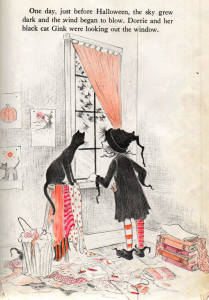 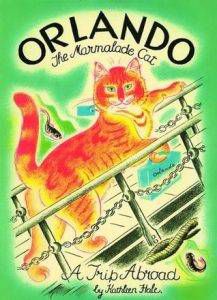 It’s not hard to see why this series was hugely popular when in came out in the 40s: it features anthropomorphized cat getting into wacky adventures (including going to the moon!) rendered in colourful, playful paintings. In fact, it became such a big hit that the author, rumor says, became resentful that he got more attention than her other, more serious paintings. What is puzzling is why these beautiful books aren’t still on shelves today. See more of the Orlando illustrations and read about Hale’s contentious relationship with the cat of her own creation at Clive Hicks-Jenkins’ Artlog. 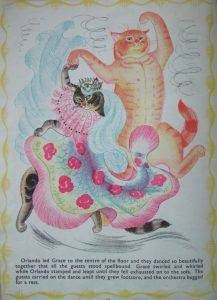 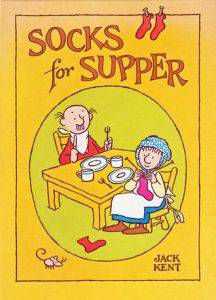 5. Socks for Supper by Jack Kent

Unlike most of the books on this list, it’s not the complex illustrations that make this a keeper. Instead, it seems to have more of the appeal of a cartoon, and is described as “a bit like The Gift of the Magi, but with way more piss and vinegar.” I find that Christmas stories tend to get a bit of an advantage for sticking in people’s minds: I think it’s because those books that get packed away all year seem so much more special when they’re unearthed in December and reread for the first time in many months. Check out more of the illustrations at Vintage Kids’ Books My Kid Loves. 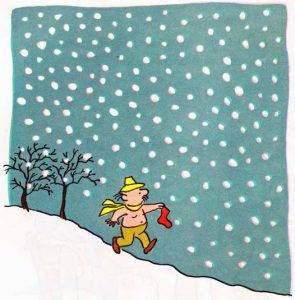 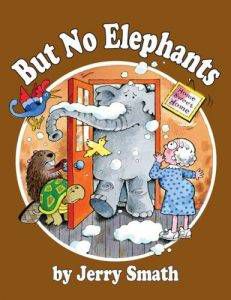 4. But No Elephants by Jerry Smath

This one is traded in to the store sometimes, but it’s asked for more than we see it. It’s an unassuming, 70s-looking picture published by Parents Magazine Press (usually a bad sign), but apparently the charm overcame those obstacles. It follows Grandma Tildy, who keep taking on new, unusual pets who prove themselves quite useful. She’s adamant about one thing, though: she will not buy the pet seller’s elephant. I can see why this is a favourite, from the Green Eggs and Ham-style repetition to the happy adopted animal family.

Full disclosure: this may not actually belong on this list. Amazon says that there are new paperback editions, but I can’t find out enough details to see if these are good quality ones or photocopied, poor quality print-on-demand versions, so I’m keeping it. See more of the illustrations at Books and Umbrellas (or search it on Youtube for several videos of it being read aloud!) 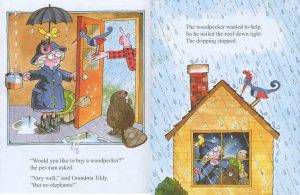 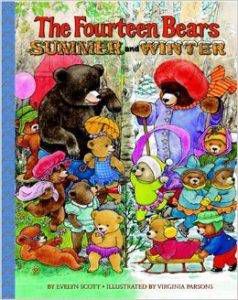 3. The Fourteen Bears in Summer and Winter by Evelyn Scott

For each of these books, I’ve tried to do a little digging into what makes them enduring classics. Why do people still hunt for these stories long after any publishers have bothered with them? So far, I’ve been able to include a link for each book that explains why people are fans of each title and author. This book is a bit of a funny example, though, because every single page I found talking about it was from an interior design website. (Here’s one example.) This book follows a family of fourteen bears and their adventures in summer and winter, but what readers remember is that they all have their own house decorated in their own style. Apparently, young decorators-to-be pored over these pages, deciding which style they’d like the best! It may be niche, but it’s the most scarce book on this list, at least in our store: I’ve never seen a copy come in, but people have been waiting for it dating back seven years (which is when we started the request list). 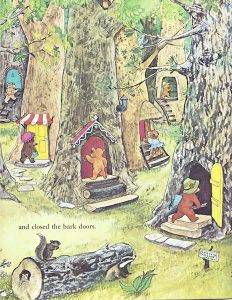 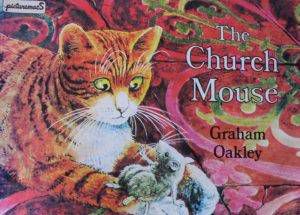 From the most scarce to the least: The Church Mouse series is one I see come into our store fairly regularly, but they leave just as quickly as they can get them. Although I didn’t read these as a kid, I’ve become familiar enough with them that I have a lot of fondness for this series. And how could you not? A community of mice in a church befriend a saintlike cat, whom they quickly pull into their various misadventures. I can’t help but be won over by the meticulously detailed illustrations of dozens of mice darting around poor Sampson. Browse more of the illustrations at Graham Oakley’s website (click on the covers). 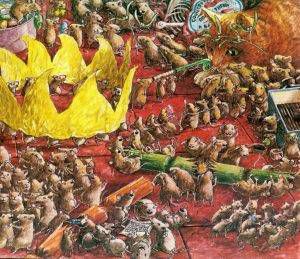 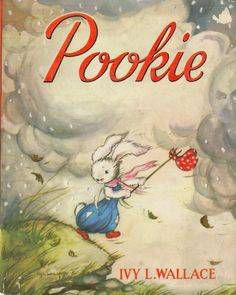 Finally, the Holy Grail of kids’ books: Pookie. Finding a copy of one of these books for a dollar was the best bookish find of my life. I think this one really explains itself, but just in case: it’s about a little white rabbit with wings. And those illustrations! The whimsy and nostalgia factors are both very high. Amazon claims to have Pookie new in paperback, but I’m not sure about the quality of that one either, and the rest of the series is completely out of print. These are books that look even better in person, but you can take a look at more of the illustrations at Harriet Muncaster Illustration. 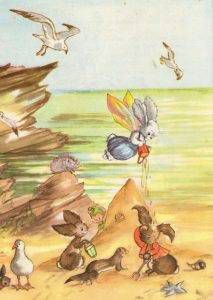 This is far from a complete list! I decided to stick to picture books in order to feature the illustrations, and I also skipped the Noddy series by Enid Blyton because I felt like it’s already very well known.

Do you have any favourite childhood books that are no longer in print?