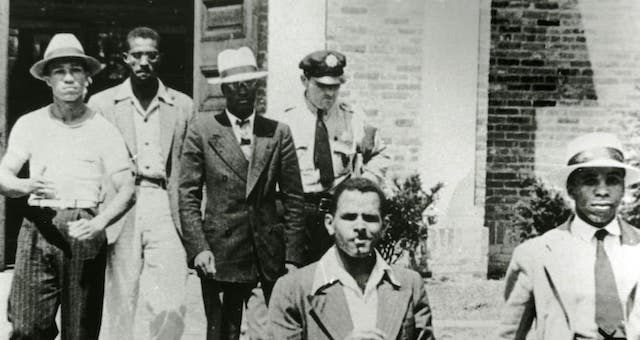 Critical Linking, a daily roundup of interesting bookish links from around the web. is sponsored by There You Are by Mathea Morais, from Amberjack Publishing.

“Five young African American men sat reading at separate tables in Alexandria’s new whites-only library on Queen Street. They had just been refused library cards; in 1939, that was a privilege off-limits to black citizens.

But the demonstration caused an uproar. Within minutes, the police arrived to find about 300 counterprotesters and members of the press outside the building. After some consultation, police arrested the five men on charges of disorderly conduct.

Those charges have finally been dismissed, after lingering unresolved for 80 years.”

Not enough people know about the Alexandria sit in, and this news of the charges being dropped is long, long overdue.

“Spooky season is officially here, which means it’s time to stock up on scary reads. But if you’re looking for something a little different this October – something beyond the typical go-to horrors of Bram Stoker, Mary Shelley, or even Shirley Jackson (though we still love you, Shirley!) – this reading list is for you. I asked staff and friends of the CHIRB to recommend their favorite Halloween reads that have been overlooked, out-of-print, or not usually thought of as “horror.” Some are downright harrowing while others simmer with existential dread. All of them will leave you shaken, unsettled, and probably sleeping with the lights on.”

“Jack Kerouac dropped by the office last night and batted out three stories while I was trying to get one paragraph right,” Fowler wrote in the June 16, 1965 edition of the Independent.

The stories he wrote talked about that year’s MLB pennant race, his favorite sports writers and the historic boxing match that pitted Sonny Liston against Muhammad Ali. He even mentions Robert Goulet.

Like much of Kerouac’s time in St. Pete, the stories were lost to time and changing worlds.”