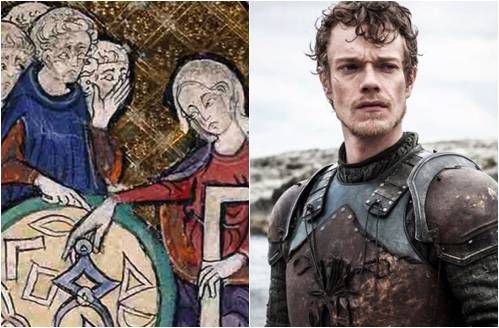 This is a guest post from Signe Pike. Signe is author of the travel memoir FAERY TALE and an upcoming historical trilogy set in 6th century Scotland. Visit her at www.signepike.com. Follow her on Twitter @SignePike.

George R.R. Martin has an unparalleled gift for creating fantastical realms. But if you’re a history buff who has done their homework, it’s easy to see where Martin draws his inspiration from: the fantastical realm of ancient man. In researching early medieval history for an upcoming trilogy, I discovered just how much inspiration Martin has taken from our true past. The heart of Martin’s mythos spans the globe – from the magic, lore and laws of early medieval Ireland and Britain, to the historical events and legends of Hawaii, China, the jungles of South America and beyond.

So no need to feel any surreptitious guilt for tuning in this Sunday – this is one TV series that won’t rot your brain.

Long before George R.R. Martin’s “Wall” sprang up to defend the northern borders of the Seven Kingdoms from Wildlings and White Walkers, the Roman emperor Hadrian built a great wall to defend the northern border of Roman Britain from another tribe of wildlings: The “wild barbarians” of the north, known as the Picts. Not unlike Martin’s outcasts and prisoners who were forced to join ranks with the Men of the Night’s Watch, Hadrian’s Wall was manned by Roman auxiliary soldiers, many of whom were roughnecks, sent as punishment to serve time defending the outpost at the edge of the known world.

The incredible facial reconstruction of a young Pict who was murdered in Scotland ~1400 years ago (Image: Christopher Rynn, Dundee Uni) (via @qikipedia)

When it comes to the inspiration for Martin’s terrifyingly creepy White Walkers, Hadrian’s Wall came with its share of spooky folklore, too. The Byzantine historian Procopius wrote that Romano-British citizens of the south believed the world beyond the wall was haunted by evil shades and dangerous creatures, much like the world that lurks beyond Martin’s great Wall. 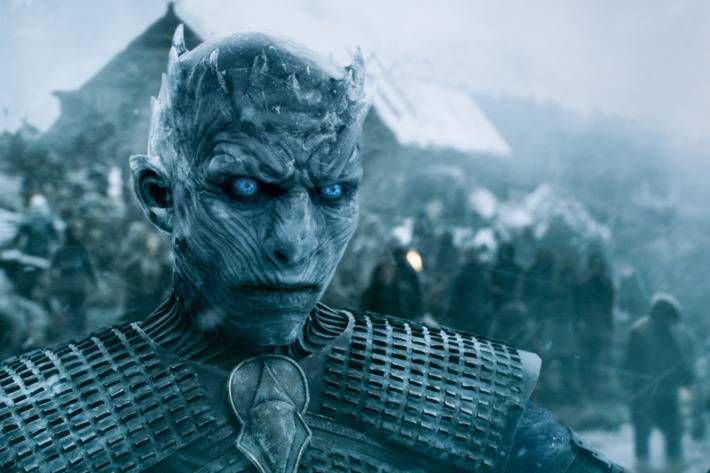 The “Night’s King,” leader of the White Walkers.

The only surviving son and heir apparent of Balon Greyjoy, Lord of the Iron Islands, Theon Greyjoy was taken as a young boy and raised by the Starks after his father’s failed rebellion against the Iron Throne and King Robert Baratheon. But in ancient Ireland and Britain, fostering played a vital role in society, its rules dictated by Brehon law. Foster children strengthened bonds between clans and helped solidify political allies. During times of war, fosterlings like Theon could be held as hostages (or for ransom), but they were always raised alongside other royal children and treated kindly to inspire loyalty.

(Left: Painting of one of the Brehons recording ancient Irish law. Right: Theon Greyjoy, as played by Alfie Allen.)

4. Stone Men vs. Lepers
It’s impossible to witness Martin’s “Stone Men” and not think of lepers. Stone Men are afflicted by “grey scale,” which renders skin dead, cracked and flaking, while leprosy comes from the Latin word lepra, meaning “scaly.” Stone Men are exiled from civilization to live in ruined cities, while for centuries lepers were shipped off to colonies like Kalaupapa on the island of Molokai in Hawaii, where 8,000 people were banished over the course of a century. 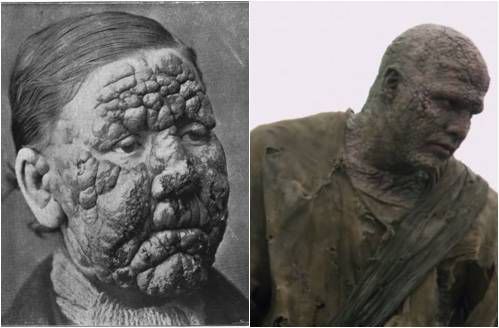 (Left: A man with leprosy c. 1905, from Norman Purvis’ An introduction to dermatology (3rd ed.), William Wood and company, Right: A Stone Man from “Game of Thrones.”)

Of course we have the ice age. But the idea of an encroaching perpetual winter is not so far fetched considering that in 536 AD, some unknown cataclysmic event caused a climactic shift unlike any in human memory. The sun shone weakly, and for only 4 hours a day, causing famine and starvation throughout large swaths of the planet. In Xi’an, China 80% of the population died and the survivors ate corpses to survive. Near Gaza, the chronicle of Bishop Zacharias of Mytilene records, “The sun began to be darkened by day and the moon by night… the winter was a severe one, so much so that from the large and unwonted quantity of snow the birds perished… there was distress… among men… from the evil things…”

So, winter may be coming to Westeros…but for many living in the 6th century, it already came.

6. The Lord of Light

In Game of Thrones the Old Gods and their followers are facing a new threat – the newly converted Stannis Baratheon and the radical believers in the Lord of Light, pitting the One God against the Many. In early medieval Ireland and Britain, the rise of Christianity challenged the beliefs of the people of the Old Way — worshippers of nature and ancestrally derived gods — in complicated ways that led to one of Britain’s ugliest yet least remembered civil wars: the battle of Arderydd in 573 AD.

And what did early medieval Christians call the Son of God? One of his most popular nicknames was “The Lord of Light.” 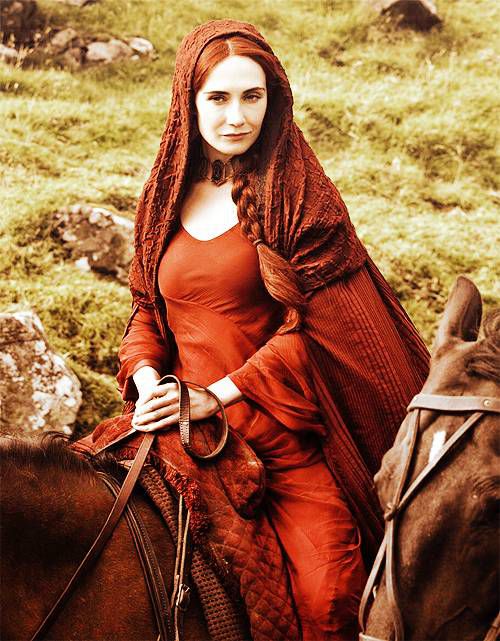 Melisandre, Priestess of the Lord of Light, played by Carice van Houten,“Game of Thrones.”

“Old Nan used to tell me stories about magical people who could live inside stags, birds, wolves...”―Bran Stark to Maester Luwin. Bran discovers he is a skin changer, one who can enter and manipulate the body of an animal, seeing the world through its eyes. But the belief in this sort of animal magic goes back thousands of years in human history. Shape-shifters were typically shamans or priests of a tribe (African, Native American, Incan, Aztec, Celtic, Germanic, Siberian, take your pick), who were believed to be able to transcend the physical realm and enter into the body of an animal for a variety of purposes: to seek healing for the sick, to appease the gods, to gain wisdom or to divine the future. The famous Celtic warrior-queen Boudicca tried to divine the outcome of her uprising against the Romans in 60 AD by releasing and tracking the movements of a wild hare. In the case of darker shamans and spirit workers, shape-shifting was even done to spy on a rival clan or even seek bodily revenge. One Mexican shaman spoke of an evil bruja (witch) who inhabited scorpions and deadly spiders in his home in an attempt to kill him. 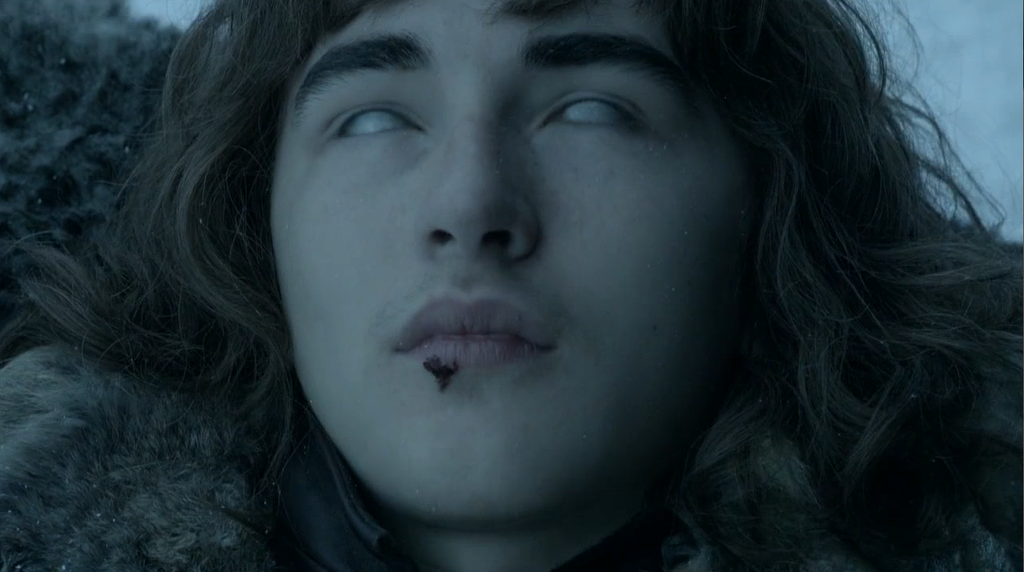 These furry and ferocious companions of the Stark children have transparent roots in history. In North America, the dire wolf was one of the best-known predators of the Late Pleistocene era, along with a type of saber-toothed cat. While Martin’s Direwolves can grow to the size of a small horse, the ancient North American dire wolf clocked in at only about 150 lbs., making it about the size of a modern grey wolf. But skeletal studies indicate that their bite force was among the strongest of any ancient mammal. When it comes to battle, the Celts were renowned for their “war dogs,” and the Roman poet Claudian described British hounds used in war and in hunting that could “break the backs of mighty bulls.” Wolf bones have been excavated from ancient encampments of Roman auxiliary troops in Scotland, Wales and Germany. Wolves in these areas were likely hunted for their skins, which were not only warm, but were thought to convey the wolf’s power to any warrior who wore the skin into battle.