Now that the end of summer is in sight, and everyone is unconsciously preparing for Halloween (I appreciate the enthusiasm, even if it is a little overzealous), there’s only a finite amount of reading time left in August. I find myself choosing books off my TBR that can be read quickly, in the span of 48 hours or less. If you’re like me, and you want to have a social life and keep up with your reading, you should check out these 8 quick books (some are part of a series, others are standalones): 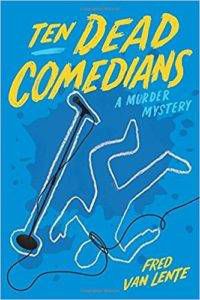 A satirical standalone murder mystery, Ten Dead Comedians is a modern tribute to such genre building blocks as Agatha Christie’s And Then There Were None. Ten Dead Comedians follows nine very different people in the comedy sphere at various points in their careers (there’s a filthy rich “blue collar” comedian, a snarky Joan Rivers-esque old-timer, an alcoholic road comic, and a struggling improv instructor, just to name a few). They all receive an invitation to join comedic legend Dustin Walker on his private island in the name of collaboration (teamwork makes the dream work). Sounds like paradise, right? It would be, if they weren’t stranded on said island, slated for certain death, either via intricately-placed booby trap or angry murderer. Everyone has a piece of the puzzle, but no one is certain who to trust. Van Lente’s strength is in his narrative ability (writing nine distinct voices in the span of 288 pages) and his sharp, acerbic humour. The mystery is pretty fun too! 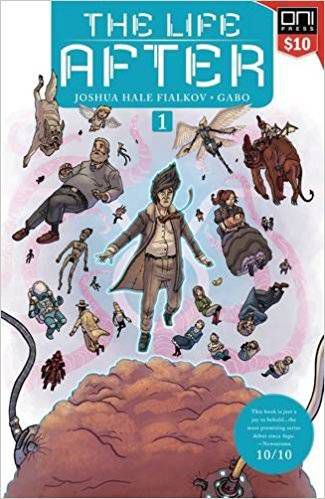 The Life After is a brilliant, bold comic series about the afterlife. We follow protagonist Jude who is living a life that’s more like a personalized version of Groundhog Day — until he meets Nettie, a woman who drops her handkerchief every day on the bus ride home from work. Jude plucks up the courage tap her on the shoulder and return it, only to realize he can see into her past, and everyone else’s that he makes physical contact with. It isn’t long before Jude discovers he’s stuck in purgatory, and not just plain old purgatory, but the specific section reserved for people who have committed suicide. Now that he knows the truth, Jude, with the help of Ernest Hemingway (yeah, the Ernest Hemingway) is on a mission to shake up the afterlife’s status quo and change the game for billions of lost souls, the combined wrath of Heaven and Hell be damned. There are four volumes in the series (it’s complete now), and they all make for fast, entertaining reads. Gabo’s art and colours are utter perfection, elevating a great comic into a must-read. 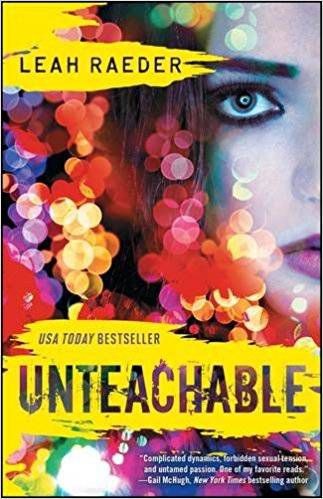 I have a love/hate relationship with about 90% of the new adult books I pick up. This is not the case for Unteachable, which kept me hooked from the first page to the last. Maise O’Malley is a hard-bitten 18-year-old who can’t wait to ditch her claustrophobic hometown and her toxic, drug-addict mother, and start fresh. Maise isn’t exactly a big believer in soulmates or true love, until, at the end of the summer, she meets the charming Evan Wilke at her town’s fair. After a night of passion, Maise resolves to put him out of her mind and focus on her future. But sometimes life takes cinematic twists, and Maise’s plans are thrown in the crapper when she walks into her film studies class, only to come face to face with the handsome Mr. (Evan) Wilke, whose close proximity and sudden “forbidden fruit” status make him all the more delicious. While I did have a major soft spot for manic pixie dream boy Wesley, Raeder wrote this standalone so compellingly, the ultimate end-game is undeniable. 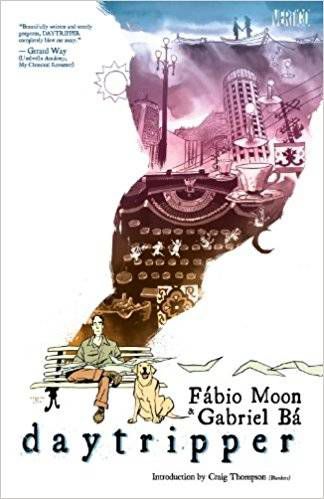 Daytripper follows Brás, an obituary writer who yearns to follow in his famous father’s footsteps and become a renowned author in his own right. But as Brás waits for the telltale strains of “When Will My Life Begin” to musically progress him through the boring slog of writing out the ends of other people’s stories, he’s essentially missing out on the wonder that is his own. Honestly, I don’t know why more people don’t rave about this, because it’s literally something everyone can relate to, whether they’re mid-existential crisis or just looking for something to pass the time on the bus ride home (note: I think my face did some weird, emotional things while reading this, so if you don’t want your face doing that while surrounded by strangers, maybe don’t read this on the bus). Daytripper is a gorgeous, sentimental, thought-provoking read. 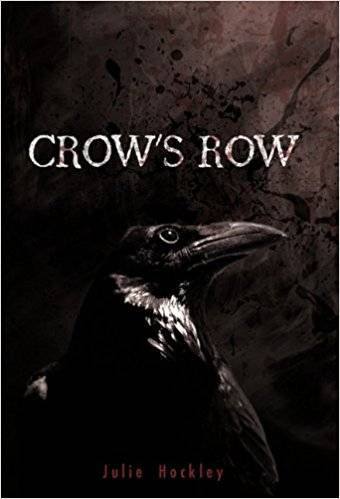 This is the book that made me aware of the new adult craze, so while I can accept that it’s one of the earliest byproducts of the then-burgeoning genre (ie, if I took my blinders off I would probably notice its flaws), subjectively, I still have a soft spot for it (enough to track down a physical copy, anyway). Emily Sheppard was devastated when her older brother Bill died. While visiting his grave, she witnesses a violent murder— and promptly blacks out. When she wakes up, it’s to the realization that she’s been kidnapped by a crime boss and his gang, people who knew her brother, know what happened to him, who he really was, how he really died. Desperate for answers and with no way to escape, Emily finds herself falling in  love with the crime boss who kidnapped her, Cameron. Aware that Stockholm syndrome is a thing but caught between her head and her heart, the secrets Emily’s brother tried to hide are ultimately coming back to bite his baby sister in the ass— and they’re the kind of secrets that kill. I adore the first book, but the second one made my brain cringe, and Hockley hasn’t updated any of her social media platforms in years, leading me to believe the supposed-to-happen third book is merely a pipe dream. Technically, this is part of a trilogy, but given the fact that the last one seems to be in permanent limbo, it works better as a standalone. 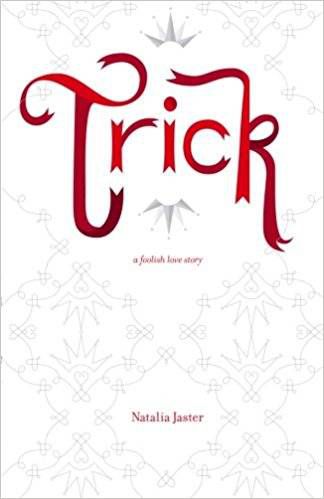 Marked as “mature YA” by the author (there’s sexual content, but it’s not explicit), Trick is hands-down one of my favourite books. We follow Briar, an uptight princess and Poet, a jester with a silver tongue (and the reputation to match), both of whom have similar political goals, plenty of passion, and a deep-rooted hatred of each other. Poet thinks Briar needs to sit all the way down and learn to laugh at herself, Briar thinks Poet needs to take something seriously. But behind the glittering court walls and the glamorous performances he puts on each night, Poet is hiding a secret that none of the four kingdoms would forgive, a secret that the hot-headed princess is hell-bent on discovering. Despite the book’s Medieval setting, I was impressed with the way it handled topics that are still (unfortunately) divisive in today’s society. Every time I pick this up (I had to buy a new copy, my original one was so beat-up), I’m able to get lost in it just as thoroughly as I did the first time around. Jaster has also released a second book, Dare, set in the same world but following new characters. I have yet to read it because I’ve hyped myself up too much (you know what I mean), but before the summer is through, this duology will officially be completed (and you should definitely check it out, and we can talk about it and stuff). 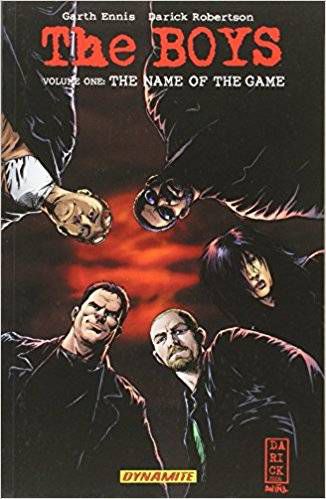 Many of you will know of Garth Ennis as the creator of Vertigo’s smash-hit Preacher series. He’s also the creator of Dynamite Entertainment’s The Boys, a mature (seriously, please don’t buy this thinking it’s okay for little kids) deconstruction of the superhero genre. And by that I mean it casually stares down the superhero genre, beats it to a pulp, steals its lunch money, and has a wickedly fun time doing it. In the world of The Boys, costumed heroes (called “supes”) are out of control, running the world like they own it and not caring about the collateral damage they leave behind. That’s where The Boys come in. A CIA-backed covert ops team licensed to use lethal force on supes when they get out of line, The Boys— Billy Butcher, Wee Hughie, Mother’s Milk, The Frenchman and The Female— aren’t heroes, but you’ll want them on your team anyway. This series (which rings in at complete with a total of 12 volumes) isn’t for the faint of heart, and is rated M for graphic violence, sexual content, unsavoury themes, and of course, swearing. It’s also highly addictive and so, so easy to get caught up in. 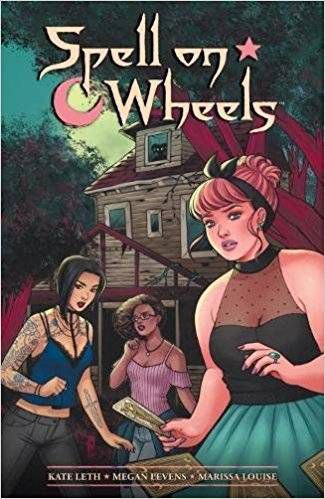 A mix of Charmed and 2002’s Crossroads (in the good way, I swear!), Spell On Wheels is a five-issue miniseries following three witches who embark on a road trip after a nefarious evildoer breaks into their house and burgles some rare, magical items, only to sell them on a black-market magic antiquities website. Together, Jolene, Claire, and Andy must track down their stolen belongings (battling such oddities as creepy old men and seemingly Stepford wives with an interest in the occult) and confront the evil that awaits them. This series has an open-ended feel to it— while Leth tied everything up with a shiny red bow, there’s enough to expand, should Dark Horse ever consider revitalizing the property and turning it into an ongoing series.

What are your favorite quick books? Find even more of our must-read short story collections if you wanna go really short.