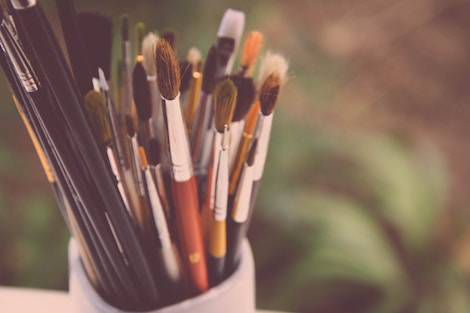 Edited: Actually, Marina Abramovic is a real artist and her installation piece “The Artist is Present” was included in her retrospective at the MoMA in 2010.

The other day I was having a conversation with a friend and I was reminded of a piece of installation art I’d recently seen. While I was describing this piece of art to my friend, I was racking my brain trying to remember where I’d seen it. Then it hit me: I hadn’t. I’d read about it a novel I’d just finished.

This is not the first time I’ve mistaken fictional art for real art. It took me about five minutes to come up with a whole bunch of fictional art that I desperately wish I could see in real life. Some of these pieces are from books I read over a decade ago, and yet the art has stayed with me, as if I’d actually seen it hanging in a museum. Just like the novels in which they appear, these pieces of art have moved me, surprised me, and challenged me—despite not actually existing, except in the powerful descriptions written by the authors who created the artists who created them.

From paintings to installations to architecture to performance art, here are ten pieces of fictional art I’d give just about anything to see in the flesh.

Matteo and Char’s mural for the New York CITY UnderPark

Imagine a massive underground mural in New York City, a treescape, with “leaves that if you found trees on Mars or Neptune or something, they’d have these kind of leaves.” The two artists have transformed street art, their signature being to “make it like you just look at the surface and the first thing you think is something’s wrong, what the fuck is happening to that wall, it’s, like, melting or frying or transforming itself or something.”

“Here’s a huge, dank underground space, a former hide for subway cars…transforming into a subterranean park with a high-tech lighting system that collects sunlight up on the street and then funnels and diffuses it below…His and Char’s project, the biggest public project they’ve ever been commissioned for, is to paint the entryway corner ceiling in a twinkling profusion of greens, blues, and yellows so that, once trees are planted, their leafy tops will disappear into the work.”

The Marina Abramovic Show at the MoMA

This is the piece I was describing to my friend, an installation piece where visitors wait in line to sit in a chair and hold eye contact with the artist. The visitors aren’t allowed to talk or ask questions or make faces. “Marina just sits there and a visitor sits across from her and they stare at each other for as long as the visitor wants.”

from Where’d You Go, Bernadette? By Maria Semple

One of only two houses ever designed by the most-talked-about innovative young architect around, Bernadette Fox built the Twenty Mile House using only materials sourced from within twenty miles of its location.

In the novel, a colleague of Bernadette’s describes a group of people from the MacArthur Foundation seeing the house for the first time:

“My friend from Chicago came out with a big group. No doubt they expected some ugly-ass yurt made out of license plates and tires. But when they walked into the Twenty Mile House, they started laughing, that’s how gorgeous it was. A sparkling glass box with clean lines, not an inch of drywall or paint. The floors were concrete; the walls and ceiling, wood; the counters, exposed aggregate with bits of broken glass for translucent color. Even with all those warm materials, it felt lighter inside that outside.”

from The Time Traveler’s Wife by Audrey Niffenegger

“She has been working nonstop for a year, building huge, ethereal bird skeletons out of wire, wrapping them in translucent strips of paper, coating them with shellac until they transmit light. Now the sculptures hang from the high ceiling, and squat on the floor. Some of them are kinetic, motorized: a few beat their wings, and there are two cock skeletons slowly demolishing each other in a corner. An eight-foot tall pigeon dominates the entrance.”

“I come home to find that Clare has created a flock of paper and wire birds, which are hanging from the ceiling in the living room. A week later our bedroom windows are full of abstract blue translucent shapes that the sun throws acorss the room onto the walls, making a sky for the bird shapes Clare has painted there.”

from The Weight of Feathers by Anna-Marie McLemore

This gorgeous novel is about two teenagers whose rival families both make their living off a traveling performance–a mermaid show performed in rivers and a tightrope show performed in the treetops. Both are astoundingly beautiful.

“They didn’t just put on costumes and stand in the trees. They climbed the boughs like cats, moving as though the high branches were wide and solid…The women’s flower crowns never came undone, the larkspur and paintbrush clinging to their heads like butterflies…They arched their arms so softly they looked as though the wind moved them…These winged creatures, las badas, kept rhythm with each other, with no music but the sound of chimes hung in the trees. No metal or wood, just pieces of polished glass, the same pastels as their dresses…They made one chime answer another, than a few more answer that one like the staggered song of nightbirds.”

“They moved like kelp, the shapes of their bodies rippling like a current. They didn’t fight their costumes. Instead they looked like they’d gone their whole lives with their legs sealed in the shimmer of beads and sequins. They bent backwards and touched their own fins. They joined hands, and the sheer fabric trailing from their tails became the points of enormous stars…They gathered and then dispersed like damselflies…The shells and pearls dotting their hair made them look crowned with their own small coal reefs. Light blinked off their bodies like fish scales speckled their skin.”

from The Bird Artist by Howard Norman

From barn swallows to sandpipers, ospreys to cormorants, Fabian Vas paints the birds of his native Witless Bay, Newfoundland with what I can only imagine to be absolute precision and grace. It’s his process as much as the paintings themselves that I love:

“Then, moving to a more comfortable rock hollowed out almost like a chair, I sat sketching the garganey for a good two hours. I drew him as he slept. I drew him as he lifted his head, preened, skitted across the surface…He fed awhile, scooping, shoveling, shaking his head, dripping, drifting, slowly turning with the random eddies…I drew. Those were the elements: water, rocks, sun; the garganey, a migrant here for a short stay, whose life I had only happened upon because of that morning’s particular luck.”

from What I Loved by Siri Hustvedt

This book is worth reading simply for the many breathtaking descriptions of art. The paragraph below is the beginning of a many-page description of an exhibit of mixed-media sculptures, filled with hidden doors, on the theme of hysteria.

“I saw three huge shallow boxes–each ten feet night, seven feet wide, and a foot deep–standing in the middle of the room. Canvas had been stretched across their frames, and the material glowed, lit by electric lights sealed inside the boxes. At first, all I noticed were their surfaces: hallways, stairs, windows, and doors painted in muted colors–browns, ochers, deep greens, and blues…Doors lay on their sides or were tilted at impossible angles. A fire escape seemed to crawl through a hole from a painted outside to a painted inside, bringing a long cluster of ivy with it.”

from Ghana Must Go by Taiye Selasi

From his first attempts at drawing a boy to the series of portraits inspired by the Greek muses that he is working on as the novel unfolds, I was captivated both by the art itself and the ways in which it influenced Kehinde’s relationship with other characters.

“Nine full-length portraits, the bodies unfinished, but clearly her face, slightly altered in each, with some object, a lyre or a hymn-book or a pencil to make the thing plain to nonreaders of Greek.”