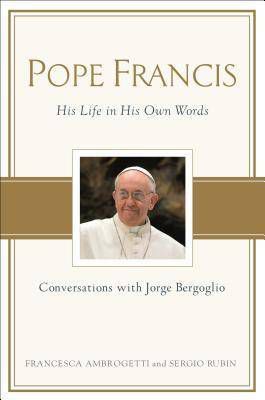 Penguin sent me this book for review. My perspective on it, however, is completely my own. See our Review Policy for more information.

When he was still a Cardinal, Jorge Bergoglio — now Pope Francis — sat down with Sergio Rubin and Francesca Ambrogetti to talk about the Catholic church, the importance of work, the financial crisis, and Argentina, among many other topics.  These interviews have been recently republished as Pope Francis: His Life in His Own Words. Now, I’m no Catholic; in fact, I’m an atheist with strong negative feeling about the Catholic church as an institution. It was for that reason that I was so interested to read Pope Francis’s thoughts in his own words and without added layers of media spin.

I came away from this book with a great deal of respect for the man, and a huge amount of frustration at his blindness to some of the central faults and problems with the institution he now leads. I saw in these pages a compassionate, thoughtful, poetic man, and I wonder how his humility and simplicity will shape the Catholic church in the coming years. Or will they be lost?

Mostly, though, I had my eyes opened to the man — and I thought rather than a traditional review (because I think your response to a book about the Pope is going to be so ideologically driven that there’s almost no point), I’d share seven interesting things I learned about Pope Francis from reading this book. Here’s my favourite facts from this collection of interviews.

He totally knows what you’re thinking about the church ladies in your town.

… when people come to the parish to request a sacrament or anything else, they are not always met by a priest but the parish secretary who, from time to time, can turn out to be a bit of a shrew.  There used to be a secretary in the diocese whom the congregation called “the tarantula.”

He has some tough talk for Argentinians.

We are especially narrow-minded, quick to go off and do our own thing.  An example of this is the roughly nineteen hundred candidates who were registered in the 2007 elections in the province of Misiones!  In the presidential election that year there were eighteen candidates.  So we are either a fantastic nation with eighteen geniuses who can lead the country, or we are a nation of fools who can’t agree.

He has an appreciation of flexibility in orthodoxy.

I remember traveling at Christmas in 1980; I was seated beside an elderly Jewish couple on their way to Jerusalem.  A delightful pair.  When it was announced after dinner that ice cream would be served to mark the occasion, the man muttered sadly that he couldn’t eat it, as they had already had meat.  As you know, they cannot mix meat and milk.  But seconds later he looked at me with a sly grin and proclaimed: “But today is Christmas, Father!”  And he ordered himself a serving, just like that.  I could have kissed him.

He spins a mean simile.

Resentment is bitterness.  And living with bitterness is like drinking urine, like eating your own feces; it suggests you don’t want to leave the pigsty.  […]  Resentment is like a house where squatters live piled one atop another with no view of the sky.

There was a goal by René Pontoni almost worthy of a Nobel Prize.

I once heard a priest say that eliminating celibacy would allow him to not be alone and to have a wife, but with that he would also be getting a mother-in-law.

He appreciates a good tango.

I danced it as a young man, although I preferred the milonga.