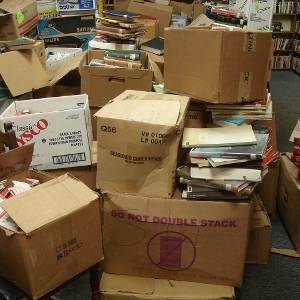 Let’s review: during the past month, we’ve heard about some crazy manuscript discoveries (Harper Lee, Dr. Seuss, and Arthur Conan Doyle). And we here at Book Riot started wondering why all of these texts are suddenly coming to light around the same time. Aliens? Ghosts? An alternate universe made of books breaking through into our own? Here are some of our other theories:

The Ghost of Future Jonathan Franzen: we all know that this guy just needs to put a sock in it pretty much all the time. Yes, Jonny can write, but has he ever wondered why he often make people’s eyes roll back into their heads? But then it came to us: all of these magnificent discoveries? THEY’RE ALL THANKS TO FUTURE JONATHAN FRANZEN. He’s, like, 95 years old and he’s thinking back on how pompous he was and feeling kinda crappy about it. What better way to make amends than to give the world more Lee, Seuss, and Doyle?! How do we know this is Future Franzen’s doing? Because on each manuscript, if you look closely, you can see the faintest watermark of his face.

Solar Flares: Every once in a while, scientists start yelling about solar flares and how they might mess up the electrical grid. Because the sun is no joke, you guys, it’s hot and big and without it we’d be…well…not here reading this post. And really, how much do we actually know about the sun’s effect on the Earth? Perhaps a little solar flare about a month ago was ignored by scientists, but wound up magnetically attracting undiscovered manuscripts? Suddenly, the Lee book leapt into the air from underneath a bunch of old grocery bills? Or the Dr. Seuss book burst out of its hiding place and landed on someone’s face? I’m just sayin’.

The “Hey, I’ve Got Random Crap in My Attic!” Effect: People have SO. MUCH. CRAP in their attics/basements/sunrooms/garages/I could go on. I mean, have you ever watched Antiques Roadshow?! Exactly. So people hear about the new Lee novel and are all “hey maybe I have someone’s manuscript in my attic because why not it happens to other people why not to meeee?” So the rummaging began and lo! more manuscripts. I can see the headline now: “American economy shuts down for a week while everyone runs to their storage lockers to see if an undiscovered Melville or Austen manuscript is hiding in the corner.”

A Seance Held By Haruki Murakami, Toni Morrison, China Mieville, and Donna Tartt: So these four literary heavyweights decided one day that they’d hold a seance because seances are cool and maybe they’d get to talk to their favorite dead writers. How surprised were they when they joined hands and called upon their literary heroes, only to hear a faint whisper in the air- a whisper that told them where to find forgotten manuscripts? They were extremely surprised. When the seance was over, they each wrote the location of a hidden literary gem on a piece of paper and slipped them under the doors of newspaper offices.

Geraldo Has Been Secretly Searching Every Vault in America: That’s right, folks. Geraldo is the champion of the book world, single-handedly crawling around rusty old vaults, dodging freakishly-large spiders, mice, and dust bunnies as big as your head to find manuscripts for us to gush over. We should give him a medal. Or something. 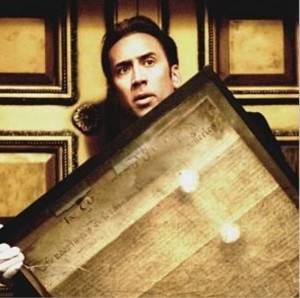 Nicholas Cage Found Them During Filming for National Treasure 3: But of course! Turns out the manuscripts were each hidden behind priceless paintings in three different prestigious museums around the country, covered in invisibility juice and folded into tiny origami animals. Only Nick Cage could’ve found them.

Aliens With X-Ray Vision Who’ve Been Living On Our Planet Secretly For Years Couldn’t Wait Any More: Yes, so those aliens who live among us but look like us have known all along about the existence of these texts because they have super-powerful alien x-ray vision or something. They thought, “Well, these humans may be dumb, but they can’t be that dumb. They’ll find these manuscripts eventually.” Well, that statement was made about 35 years ago. And then, early this year, the aliens couldn’t wait any more. It was killing them. They just had to establish telepathic links with the appropriate people and tell them where to find the beauties. But now we know that aliens are here. Their cover is blown. Oops.