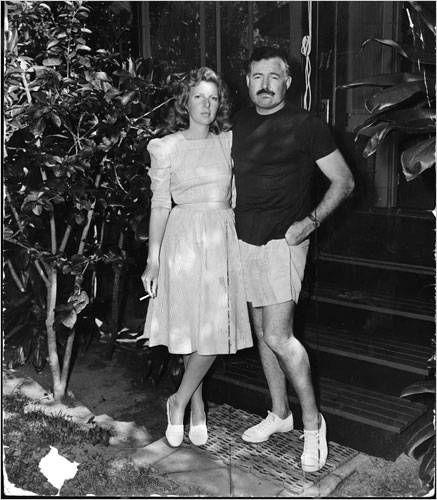 No matter where you stand on the Valentine’s Day spectrum (sneering or as sweet as a conversation heart half-melted in a sweaty palm), it’s hard to resist the love stories of great authors who fall for each other. When two such creative forces collide, just think of the passionate letters, diaries, poems, and novels that result . . .

So this admitted sentimentalist salutes the holiday by celebrating some of the juiciest, most ardent love affairs between authors. I’m recusing some of the really painful affairs (sorry, Sylvia Plath and Ted Hughes) and focusing on about the couples who had something of a happy ending. Let’s have a little gossip, shall we?

Vote for your favorite couple—or suggest another!—in the comments below. 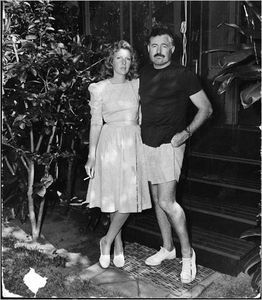 How they met: In 1936, Gellhorn spent Christmas in Key West, Florida, with her family—and they all bumped into Hemingway in Sloppy Joe’s bar. Hemingway, then married to Wife #2, Pauline, was already a world-renowned author. Gellhorn was a striking blonde journalist and had recently published The Trouble I’ve Seen, an eyewitness account of desperate Americans during the Depression.

And then what happened: Within six months, Hemingway and Gellhorn reunited in Spain, where they dodged bombs and started an incendiary affair while covering the civil war. Hemingway encouraged Gellhorn’s writing, and she became a regular front-line reporter for Collier’s. He called her “Mooky,” she called him “Scrooby.” In November 1940, Hemingway got his divorce from Pauline and married Gellhorn. During World War II, Gellhorn reported from Europe and Asia, and the time she spent traveling and working grated on Hemingway. He asked, “are you a war correspondent, or a wife in my bed?” They split in 1945, and although Gellhorn would never discuss him publicly, she famously said she wouldn’t settle for being “a footnote in someone else’s life.”

How they met: In 1851, Evans met the critic and philosopher George Henry Lewes in a bookshop (even if this isn’t true, I hope it is!), introduced by her publisher (and onetime crush) John Chapman. Lewes was short, homely, and married. But it was an open marriage. Cue more conversation over the tea tables . . .

And then what happened: Once the kindred spirits clicked, they risked scandal and social ostracism by openly living together. Evans wrote to a friend: “Light and easily broken ties are what I neither desire theoretically nor could live for practically. Women who are satisfied with such ties do not act as I have done—they obtain what they desire and are still invited to dinner.”

In 1854, the couple left London for a few years in Europe, an elopement of sorts. Lewes could not divorce his wife because of a legal snafu involving his wife’s children by a mutual friend, whom Lewes had named as his own. Still, he and Evans considered themselves married, and the future author of Middlemarch called herself Mrs. Lewes. They lived in unwedded bliss until Lewes’s death in 1878. 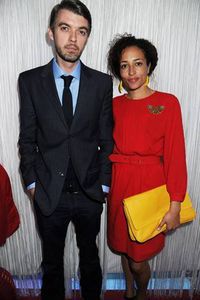 How they met: Beauty, brains, and Cambridge. Pop a Pepto and keep reading. Both Smith of the Impossible Cheekbones and the Northern Irish Laird were the first people in their respective families to go to college, landing at Cambridge University. Smith submitted a short story for a student paper and met the editor, Laird.

And then what happened: They hit it off over literature, of course. They both entered to win a literary prize; Laird won, and a few weeks later, Smith signed the deal for her debut novel, White Teeth. In 2004, they got married at the King’s College chapel at Cambridge. Laird writes poetry and novels, and Smith is renowned for her fiction and criticism. The two authors show each other their work and have a faithfully trusting relationship. “I fundamentally believe Nick is on my side, because I’m fundamentally on his side,” Smith told the Telegraph. They now have two children and split their time between New York and London. Sigh with envy or happiness, your pick.

How they met: Strange to think of Anaïs Nin married to a banker, isn’t it? But she was, and remained, married to Hugh Guiler, a banker, engraver, and relatively tolerant fellow. In 1931, a mutual friend brought Miller to lunch at Nin’s home in Louveciennes, a Parisian suburb. Miller was scraping by as a writer in Paris, and he also had an entrancing wife, June.

How they met: In 1833, the notorious, pants-wearing novelist George Sand sat down next to poet Alfred de Musset at a dinner party hosted by their editor. She had previously told a friend that she did not want to meet this “dandy,” but soon invited him to call on her.

And then what happened: Within a few months, de Musset was sending Sand lovesick letters. “My heart was not so worn out as I had feared,” Sand confessed to a friend. “I find a candor, a loyalty, and a tenderness which cause me intoxicating delight.” In early 1834, they traveled to Venice. Sand got quite sick, but de Musset went out to take advantage of the cabarets and courtesans. When he got seriously ill in turn (HA!), Sand called in a young Dr. Pagello . . . and became his lover during de Musset’s recovery. By 1835, their affair was over, but they both got a book out of it. He published a thinly veiled account, The Confession of a Child of the Century, and she had her say with the novel Elle et lui. Neither was, shall we say, flattering. 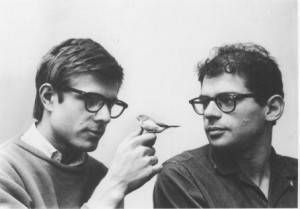 How they met: Apparently it was love at first sight. Ginsberg, having broken up with William Burroughs and traveled through Mexico, ended up in San Francisco in 1954. That December, he went to painter Robert LaVigne’s apartment, where he saw the painter’s model, Orlovsky, and was smitten.

And then what happened: In 1955, they pledged themselves to each other. Ginsberg described that moment as transformative: “At that instant, we looked into each other’s eyes and there was a kind of celestial cold fire that crept over us and blazed up and illuminated the entire cafeteria and made it an eternal place.” They encouraged each other to write, and Orlovsky supported Ginsberg through the Howl obscenity trial. Though they weren’t monogamous, they stayed together until Ginsberg’s death in 1997.

How they met: In 1956, Bayley was studying at Oxford when he spotted Murdoch cycling past his window. The very next day, they ran into each other and a mutual friend introduced them. Bayley reports that he nervously took a swig of his martini and choked, as he wasn’t used to strong gin.

And then what happened: Bayley invited Murdoch to a school dance. She had her own awkward moment by falling down some stairs on the way into the party. In Elegy for Iris, Bayley reveals that he found her diary entry for that night: “St. Antony’s Dance. Fell down the steps, and seem to have fallen in love with J.” Only a Brit could have written such a delicious understatement. They married that year, and entwined their academic, prolific lives together until her death in 1999.
____________________________
Sign up for our newsletter to have the best of Book Riot delivered straight to your inbox every two weeks. No spam. We promise.