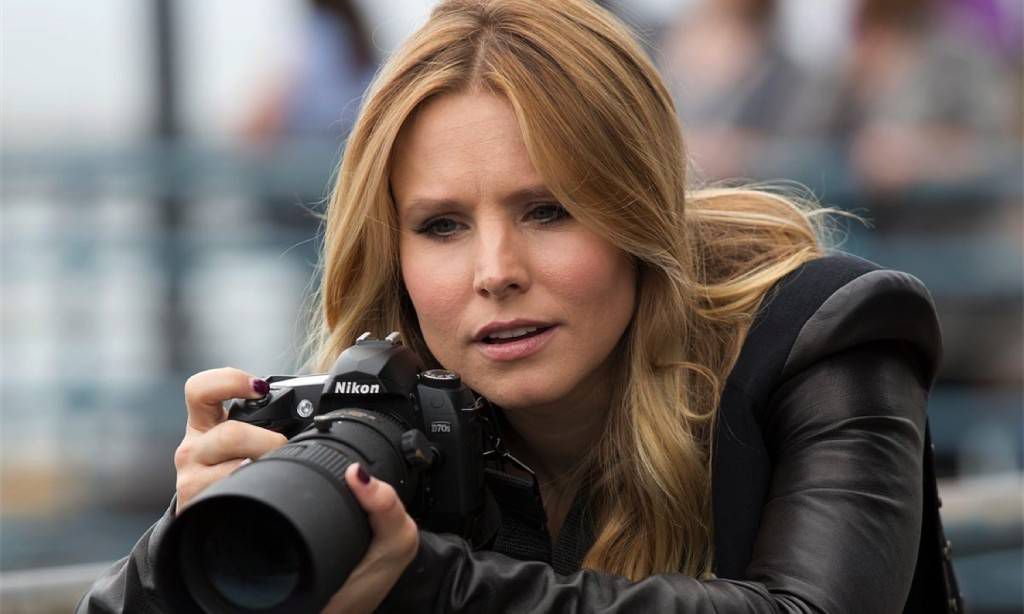 When Veronica Mars debuted on a still young CW network back in 2004, I assumed it might just be another teen melodrama. But… there was something about those first promo ads, with Veronica pointing her camera from inside her car, that evoked that P.I. thing that I dig so much.

And so I skeptically watched the first episode, and… Holy Hammett and Chandler, I was hooked! The show was a lot darker than anything I expected. And Veronica was such a fantastic character.

Rather than tell you what you already know about Veronica Mars, let’s take a look at some comic books that reflect a lot of what intrigues me (and you) about our favorite teenage private eye. And if you’re not a Veronica Mars fan, maybe these comics will send you back to Neptune to see what all the fuss is about.

Leave it to Chance — Watching the first season of Veronica Mars, I found myself championing the series to skeptical friends. “It’s like Raymond Chandler wrote Nancy Drew!” Now if you replace Chandler with, oh, J.K Rowling, you might get something like Leave it to Chance, first published in 1996. Written by James Robinson and illustrated by Paul Smith, Leave it to Chance was an all-ages comics series that skewed a little younger than Veronica Mars, but stilll has some of that great teen sleuth dynamic. 14 year-old Chance Falconer lives in Devil’s Echo, a town where the occult is an everyday thing. Her father, Lucas Falconer, is the town’s protector, but that doesn’t stop Chance from getting mixed up in supernatural mysteries, often against her father’s wishes.

Batgirl… and also Batgirl – The current Batgirl (of Burnside) series is a good contender, given that one of the cool things about Veronica Mars was always that she was a PI that used modern tech to get stuff done. The current series, by Brendan Fletcher, Cameron Stewart and Babs Tarr kind of reminds me a little of Season 3 of Veronica Mars, as Veronica heads off to college — breaking out into a new corner of the world, while still maintaining strong ties to her past. And under the current status quo, Batgirl’s father also happens to be the Batman, which makes for some interesting father-daughter conflict… something we often saw on Veronica Mars — father and daughter each with a similar sense of justice, but coming at it with differing priorities.

But! But! We’ve talked a lot about the current run on Batgirl, and it’s time to give some attention to the short-lived run of the Stephanie Brown Batgirl, much beloved by several of us here at Panels. Here’s the thing about Veronica Mars. She never quite fits in. She doesn’t fit in with the rich kids, and she no longer fits in with the poor kids. And through all of that, she carves out her own identity. Stephanie Brown feels similar.  She became the vigilante Spoiler to stop her father, a two-bit villain. She’s dated a Robin, but that didn’t quite work out. She became a Robin for a short stint, and it didn’t end well. The Batgirl role is finally where she comes into her own. Yes, she’s got a long, complicated history, but in her series by Bryan Q. Miller, Lee Garbett, and Dustin Nguyen (among others), she gets the hero job done with smarts and enthusiasm.

Alias – I’ve been focusing on the brighter bits of Veronica Mars with the first two entries, but one of the elements that really sold me on the series pilot was the fact that there was a real darkness baked into Veronica’s story. Her best friend has been killed. Her mom left town. She was drugged at a party and raped. And through all this, Veronica pulls herself together and pushes forward.

Enter Jessica Jones, soon to be a Marvel Netflix star. Jessica Jones was first introduced to us via Marvel’s MAX imprint, a mature readers line designed to take a look at a Marvel universe with adult themes and situations. In Alias Brian Michael Bendis and artist Michael Gaydos introduce us to Jessica Jones at a low point in her life. A former super-hero, Jessica quit the costume and now works as a private investigator. She’s insecure, she’s self-destructive, she’s an alcoholic — but she muddles through, taking cases involving superhumans, similar to the way Veronica Mars became the PI to her peers at Neptune High. As luck would have it, Marvel is currently reprinting volumes of this series as Jessica Jones: Alias, which all you Marshmallows should totally pick up before the Netflix series debuts.

Hawkeye – I’ve got to specifically call out the third volume, Hawkeye: LA Woman, of Marvel’s last archer-based series. Matt Fraction and Annie Wu bring young Kate Bishop to LA, where she winds up taking a series of investigative cases in a clear homage to both The Rockford Files and Robert Altman’s take on Chandler’s The Long Goodbye (starring Elliot Gould, whose rumpled Marlowe makes an an appearance in this arc). This storyline, which was originally interwoven between the Clint Barton issues of the series, may just be one of my personal favorite bits of the series, as Fraction and Wu see Kate blunder into a mystery with nothing but good intentions, charm, and — occasionally — a quiver of arrows.

Stumptown – Greg Rucka’s Portland-based investigator, Dexedrine “Dex” Parios eschews the heavier noir accent of many PI stories, instead opting for the straight-up Rockford Files approach. And this is also a part of Veronica Mars DNA. As a TV series, Veronica Mars had larger story arcs that delved into deeper, more complicated character conflicts, but it ALSO gave us a lot of little mysteries. In her high school years, Veronica quickly established a reputation as a gumshoe by taking cases from fellow students in need. It’s that classic, most quintessential element of the private eye game  that Mars has in common with Dex Parios. Dexedrine, again, is a woman with a tangled past, but she’s not strung up by it. She’s a woman who does her job. And  her job just happens to put her face-to-face with less than savory elements of Portland, but she faces them the only way she knows how — tenacity, wit, a decent enough moral compass, and a few lucky breaks. The fourth arc of Stumptown is currently being released in issues from Oni Press with art by Justin Greenwood, but the first three volumes, with art by Matthew Southworth and Greenwood, are all still available.

Shutter –  Honestly, I wouldn’t have thought of this one at first. Our own Paul Montgomery suggested it. But as I thought about it, it seemed to fit. Maybe it’s the camera? No, there’s something more there. Shutter, by Joe Keatinge and Leila Del Duca, is an Image series currently in its third arc. I’ve only read the first volume (“Wanderlost”), and it some ways it defies categorization. It’s about Kate Christopher, whose father is a famous explorer. He’s also dead now, so he takes more of a mythic presence than the all-too-human Keith Mars. Kate is a sort of adventurer/photojournalist who lives in a crazy world where everything you might imagine is real and integrated into society. Including a talking cat clock sidekick. So, with all that zaniness, where the Mars-iness?

I think it lands on a page in the first volume. The captions capture a lot of what I think of when I think of Veronica Mars:

“You think I haven’t dealt with you kinda jerks before? You think I’m helpless? I’ve seen some shit. I’ve led a life. I’ve faced my mortality. I’ve handled impending death. So, believe me. I can handle you.”

Sounds pretty apt to me.