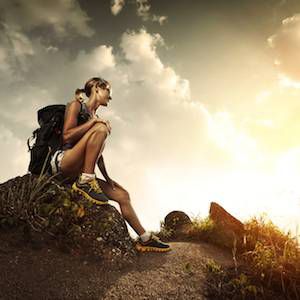 When my wife and I moved to Colorado a couple years back, we had no idea that our life would come to revolve around how much time we could spend in the mountains. Sure, they’re pretty to look at, but at the time I wasn’t much of an outdoors person and couldn’t see myself taking up hiking every single weekend.

Now, we can’t go more than a couple non-hiking weekends without feeling our souls aching for the wilds. With this hobby (lifestyle?) came a slew of books to be read that feature hiking in some form. I can’t seem to get enough.

If you’re an avid hiker, you’ll love the 7 books below. I’ll also try to convince you that everyone’s favorite book of 2012, which is supposedly about “hiking,” is not deserving of a place in the Outdoors/Nature genre.

1. The Hiker’s Bible by Robert Elman. This book is delightful almost entirely because of its 70s-ness. Beyond the awesome beards and short-shorts featured in the black and white photos, there are some seriously helpful tidbits of info about choosing backpacks, identifying ticks, and gathering all the necessary supplies for a weekend in the hills. It’s fun AND practical; win-win! This is one of those old and obscure books that don’t go digital, so your best bet is probably to buy it used on Amazon for about a penny. It may just be the best penny you’ll ever spend.

2. A Walk in the Woods by Bill Bryson. I just read this book this month and really wish I had read it sooner. Midwest native Bill Bryson takes on the 2,000-mile Appalachian Trail (AT), and writes about it with a combined humor and beauty that nearly makes you want to hop on the AT yourself. He weaves in history, environmentalism, and some of the best real-life characters you’ll ever meet. This is a book that even non-outdoorsy folks will enjoy. 3. Into Thin Air by Jon Krakauer. This is the book that really started my love affair with the outdoors and hiking/mountaineering genre. In 1996, Krakauer, on assignment with Outside Magazine, was a first-hand witness to Mt. Everest’s most disastrous hiking season before this year’s tragic avalanche. He nearly died himself, and this book became a sort of cautionary tale about the perils of seeking outdoor adventure and not acknowleding the danger involved. While Everest isn’t merely a “hike” in the way we normally think, this book draws you in and reminds you that nature is still a wild place and it’s not there to simply be conquered, but respected and even feared. If you love nature and you love reading about nature, you really should also check out Eiger Dreams and Into the Wild, also by Krakauer.

4. The Hobbit by J.R.R. Tolkien. While you don’t often see it on book covers these days, the title page usually reads, The Hobbit, or There and Back Again, as the official name of the tale. Isn’t that what a hike really is? There, and then back again. Bilbo Baggins, our very unlikely hero, takes a walk that leads him to adventures he never could have predicted, and he comes back home a better hobbit because of it. Isn’t that the end result of any jaunt through the woods or the mountains? We’re almost always better for it, and we never regret it.

Category ID: 476
Category ID: 4284
Book Deals Newsletter
Sign up for our Book Deals newsletter and get up to 80% off books you actually want to read.
Thank you for signing up! Keep an eye on your inbox.
By signing up you agree to our terms of use 5. The Indifferent Stars Above by Daniel James Brown. Somehow, before reading this book in college, I’d never heard of the Donner Party. Because of that, this book about their saga blew me away. Setting off from Missouri in a wagon train, this group of 87 people traveled fairly well until they reached the Sierra Nevada mountains of California. There, the group became trapped by an early winter, and many resorted to cannibalism to survive, only 48 of whom did. This book isn’t necessarily about hiking, but certainly includes plenty of it, especially when the Donner Party reached the Sierras and the wagons got beat up. Anything involving the 1800s, cannibalism, and mountains is a winner in my book.

6. The Last Season by Eric Blehm. Another tale of the Sierras, although a more modern account. The Last Season tells the story of National Park Ranger Randy Morgenson. In 1996, this man who had spent his career in the mountains often helping lost hikers, disappeared himself. We get an inside look at how the mountains can truly grip people, even at the expense of one’s personal life. Like Into Thin Air, it also serves as a cautionary tale, reminding and warning us that even the most seasoned hikers can succumb to the wild.

7. Undaunted Courage by Stephen Ambrose. While Lewis & Clark are mostly known for navigating up the Missouri River by boat, what’s not often known is that many of those miles were trekked on foot. The task of recording new plant and animal species was not easily accomplished from a boat, so the men would follow the river on foot, even taking un-navigable spurs for miles and miles through rough brush. Reading this made me instantly feel like a total wimp, but also made me want to go explore even more. I also recently started reading Lewis & Clark’s firsthand account in The Journals of Lewis & Clark; it’s a little tedious but certainly inspires one to get off the couch and traverse the land. Book to Avoid: Wild by Cheryl Strayed. I know. Everyone loves this book. Except, that is, people I talk to who are actually hikers. Now, I hate being judgy about books, but this one drove me batshit crazy. I get that she changed her name to Strayed, but she should have changed it to Damn-Lucky-I-Didn’t-Die. Reading about her unbelievably ill-prepared journey only served to show me how unbelievably lucky she was to even survive. People have died on the Pacific Crest Trail with far less practical problems than her. My fear is that she inspires people to pick up a backpack and head out on the trail with no preparation whatsoever in order to “find themselves.” It’s a “memoir of a spiritual journey,” sure, but please don’t take hiking tips from her, except as examples of absolutely what not to do. As Amazon itself noted in its 2012 review of the book, “Others may find her unsympathetic–just one victim of her own questionable choice.” I suppose I’m an other.