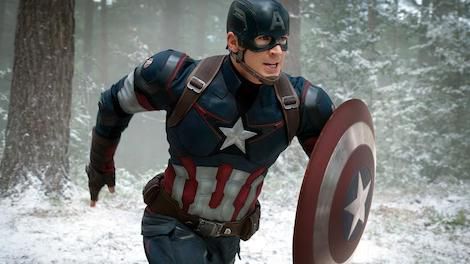 Now that Avengers: Endgame is out in the world and Chris Evans’s contracted Captain America appearances are up, everyone wants to know what his next project is. In a recent interview with The Hollywood Reporter, he threw out a tantalizing suggestion:

“I want to do a musical so badly, man. Someone told me they’re [remaking] Little Shop of Horrors and I was like, ‘Oh, can I be down? Please? Can I be the dentist?’ When I first came out here, early 2000s, there were rumblings about Spielberg maybe doing West Side Story. That’s one of my favorite musicals. I did it when I was in high school. And obviously he’s doing it now, and I called my team and they were like, Chris — maybe Krupke. You can’t. You’re too old. It’s so hard to hear.”

Since I love Chris Evans almost as much as I love musicals, this quote made me lose my mind. Sadly, I agree that at 37 he is prooobably too old to play a dancing teenage gang member (on screen, at least; if he wants to come to this winter’s Broadway production of West Side Story in a bit of stunt casting, my body is ready for his Riff). But Orin Scrivello, DDS? Yes, please!

And in case that project falls through or one nitrous-infused musical number isn’t enough to scratch his musical itch, I’ve got a few other musical parts I’d like to see our good captain play. Bookish ones, of course—this is Book Riot, after all!

So, you need help picking a musical to be in.

Joe Hardy, Damn Yankees, based on the book The Year the Yankees Lost the Pennant by Douglass Wallop (and also, like, Faust)

Watching Lin-Manuel Miranda live tweet Fosse/Verdon has rekindled my love for this show about a passionate baseball fan who sells his soul to the devil in order to help his beloved Washington Senators beat the Yankees. I know Chris is a football guy, but he does look good in a baseball cap—and I’d say there’s a Fosse-esque crispness to his Carlton dance, wouldn’t you?

Nathan Detroit, Guys and Dolls, based on short stories by Damon Runyon

Or Sky Masterson, but I’m suggesting Nathan because—Sinatra’s turn in the movie aside—it’s the part with less singing, and we know about Chris’s dancing stems but not his singing pipes. (Name that musical.) Either way, I love Guys and Dolls, and I think after portraying the best of the 1940s, it’d be fun to see him as that decade’s charmingly sleazy underbelly.

The Baker, Into the Woods, based on all the fairy tales

I’m pretty sure I read once that Chris played Jack in Into the Woods in high school? But yeah, he has the pathos to anchor this play about yearning and the unforeseen consequences of dreams coming true, and also, look how good he’d be at wanting a baby!

Bill, Kiss Me, Kate, inspired by The Taming of the Shrew by William Shakespeare

Okay, this is on my mind because I saw it on Broadway last week, but the current production does a great job of mitigating the original’s sexism, and darn it if I don’t love me some Cole Porter. Most importantly, Bill gets a big tap number in the second act, and we all know Chris grew up tapping. Look at that step-ball-change up there!

Bill Sikes, Oliver!, based on Oliver Twist by Charles Dickens

This play about a 19th century urchin searching for a home doesn’t have a lot of roles for men between the ages of 12 and 60 and Sikes really just has the one song, but I think Chris would have fun with a villainous turn. Plus we all know he looks good when he’s terrifyingly filthy.

Harold Hill, The Music Man, not really based on anything unless you count Meredith Wilson’s memoir And There I Stood with My Piccolo, but whatever, Marian’s a librarian, it counts

Look me in the eye and tell me you don’t want Chris Evans to play a traveling salesman con artist in a pinstriped suit and a straw boater. You can’t.

Superman, It’s a Bird…It’s a Plane…It’s Superman, based on Superman comics

I just think it would be funny.

Those are just a few suggestions; as a certain captain once said, I could do this all day. What would you like to see our boy Evans in?