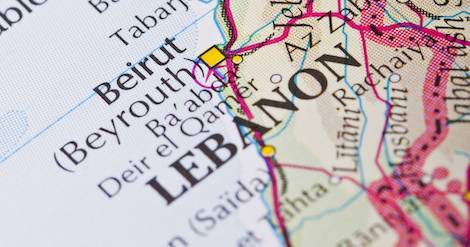 Let me begin this post by setting the mood for you. Here’s a song by the beautiful Fairouz, the legend of Lebanese music, and which is a constant presence in the mornings at any Lebanese home or breakfast place.

Lebanon is a beautifully broken country.

We haven’t had a president in three years, the parliament hasn’t achieved quorum in God knows how long, and the government can’t take any important decisions without a sign-off from the head of state. It would be comically inefficient if this wasn’t the legacy of a 15-year civil war that pitted Christians against pan-Arab nationalists and Muslims.

But the vacuum up top has left a space with little practical control over culture and expression, one that vitalizes you if you’re a fan of the arts or a lover of books. There was a saying in the Middle East, that books are written in Cairo, printed in Beirut, and read in Baghdad.

Here’s how Lebanon, particularly Beirut, made me a better reader.

Beirut has daily, rolling 3-hour power cuts (if it’s 12-3 pm today, it’ll be 9-12 tomorrow). There’s even an app that tells you when the power cut is scheduled for your neighborhood on any given day. Nowadays most people who can afford it have generators that kick in when the power goes out, but when I first moved to the city as an impoverished journalist I couldn’t afford such luxuries. But the 3-hour power cut was in fact a godsend, a rare moment when I could plausibly disconnect from the Internet and curl up with a good book. Books were anyway the best entertainment available with the prolonged power cuts in the depths of winter and summer. It didn’t matter that I couldn’t charge my phone, books needed no working power outlet.

There are few pairings besides ketchup and French fries, or chocolate and more chocolate, that are more perfect than books and coffee. Enter Dar, a popular hangout for the writer and journalist crowd nestled just off Beirut’s bustling Hamra street, a little shaded paradise that is a cafe and restaurant and a curated, independent bookstore. 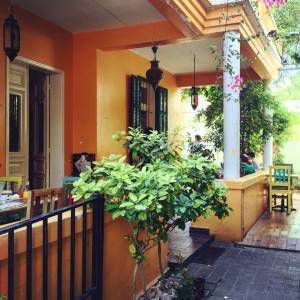 You’ll find both English and Arabic titles here, and the staff have a tendency to pick out debut novels to stock as their book of the month. That was how I first learned about the phenomenal GUAPA, a novel about a gay man coming of age in a war-torn Middle Eastern city. Between that and bookish events like signings and discussions of new titles, and the plainly gorgeous setting, Dar is a little island of calm that has made me fall in love with books again. 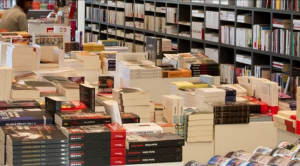 This is Lebanon’s Barnes & Noble, with the added bonus that you often find books that you wouldn’t come across in other Arab capitals (I have yet to find GUAPA in bookstores I’ve visited elsewhere in the region, and not for lack of trying). Antoine hosted the first session of my ultimately failed attempt to start a Beirut book club.

Hamra, both the most vibrant and most frustrating street in the city, is lined with numerous overstuffed independent Arabic bookshops, the largest of which is a library called Bissan that has stacks upon stacks and shelves upon shelves of Arabic books, ranging from translations of modern novels to ancient historical tracts that trace the evolution of Shia and Sunni thought. The proximity to Damascus also sometimes allow these bookstores, which often work with local publishing houses, to find some of the rarer volumes that have gone out of print.

Beirut’s traffic jams are legendary – it’s often worth it to simply cancel a meeting that’s scheduled for the early afternoon than to brave the epic congestion that often plagues this city. But often if you can take a break from the inevitable political back and forth with local taxi drivers, you could get in a good 45-60 minutes of reading a day during your commute. Plus points if you work audiobooks into your repertoire.
6) Refugees

Lebanon has over 1 million Syrian refugees who fled the war right next door (it’s about a 3 hour drive by car from Beirut to Damascus) over the last 5 years. I work as a journalist and have obviously read a lot more widely and deeply into refugee literature over the last couple of years. Samar Yazbeck’s THE CROSSING is a fascinating and emotive story, and my colleague at my newspaper Patrick Kingsley, who covers refugees, has just published a book about the European refugee crisis called THE NEW ODYSSEY.
But here’s my DIY “bookshelf” – made of wooden boxes fashioned by some entrepreneurial Syrians who sell all manner of woodwork, and deliver it to your house. That’s a map of Syria above it. 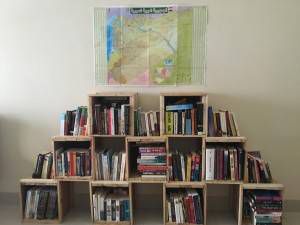