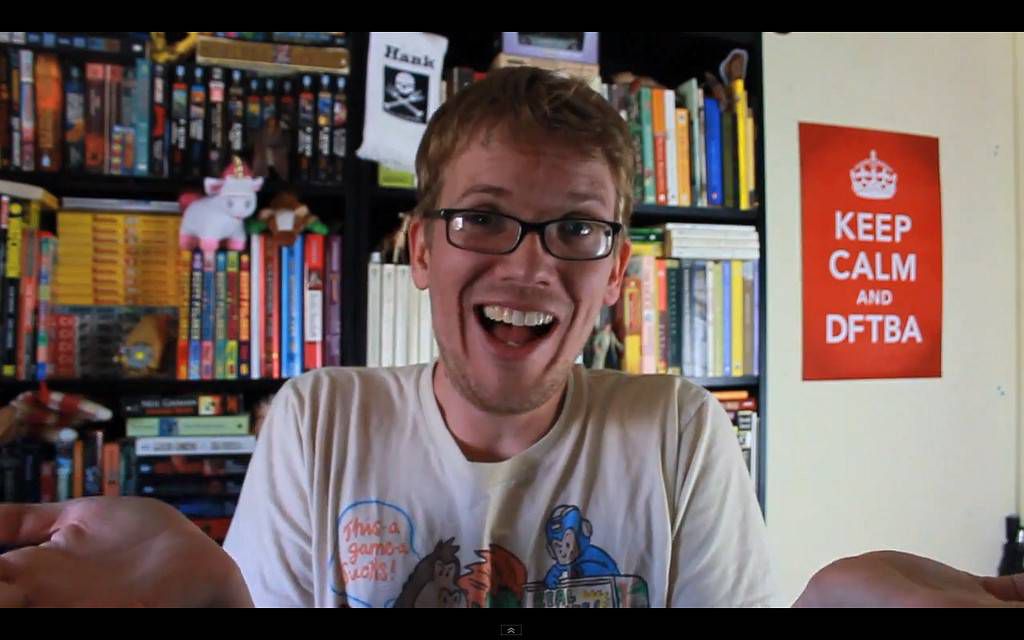 Do you spy on other people’s bookshelves?

I don’t snoop in bathroom cabinets, I go straight to the bookcases. I love to see the individual combination of books on someone’s shelves – spotting your favorites there, or discoving something new that you never knew you wanted to read.

Book collections are often eclectic and personal; unexpected or odd or insightful.

So every week when I watch Vlogbrothers (the YouTube videos made by John Green and his brother Hank Green), I find myself peering over their shoulders and spying on their bookshelves.

Want to know what’s on Hank Green’s bookshelf? Here are 57 titles I spotted.

1. The Cuckoo’s Calling by Robert Galbraith

3. The Amazing Adventures of Kavalier and Clay by Michael Chabon

4. The 5th Wave by Rick Yancey

5. The Bluest Eye by Toni Morrison

7. Memoirs of a Geisha by Arthur Golden

10. Watership Down by Richard Adams

11. The Magicians by Lev Grossman

16. Buffy the Vampire Slayer by Joss Whedon and Christopher Golden

17. Five Very Good Reasons to Punch a Dolphin in the Mouth by The Oatmeal

18. The Ocean at the End of the Lane by Neil Gaiman

20. The Name of the Wind by Patrick Rothfuss

21. Serenity by Joss Whedon, Brett Matthews, and Will Conrad

23. A Wizard of Earthsea by Ursula K. Le Guin

25. The Fall of Hyperion by Dan Simmons

27. Foundation and Empire by Isaac Asimov

29. The Sandman comics by Neil Gaiman

33. The Book Thief by Markus Zusak

35. The Astonishing Life of Octavian Nothing, Traitor to the Nation by M. T. Anderson

37. The Name of the Star by Maureen Johnson

39. The Fault in Our Stars by John Green

42. The Annotated Pride and Prejudice by Jane Austen and David Shapard

45. The Devil in the White City by Erik Larson

51. About a Boy by Nick Hornby

54. The Bone Season by Samantha Shannon

55. One Hundred Years of Solitude by Gabriel Garcia Marquez

56. The Poisonwood Bible by Barbara Kingsolver