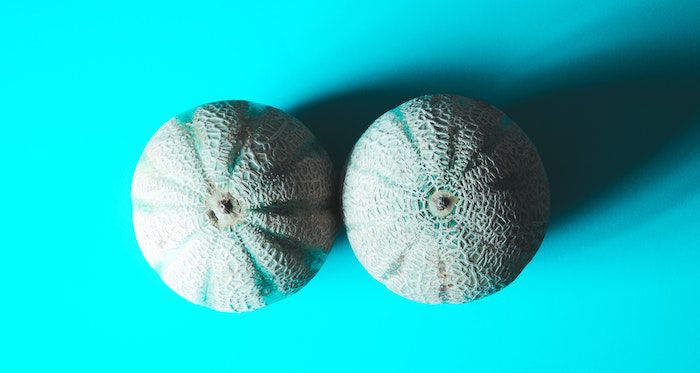 In third grade, I had to buy a different leotard than every other girl in my ballet studio. Where theirs were silky, with cute spaghetti straps, I had a cotton, thick-strapped deal. My boobs, already too large for the recital dress, required this, and because the fabric of my leotard was paper thin, I put small pieces of tissue down the top of it so the color of my nipples didn’t show through.

My peers began wearing bras in 5th grade. They showed off the colorful straps in the morning attendance lines. Rather than join them, though, I continued to avoid picking out or wearing a bra, preferring to wear tops that would allow me to slouch and hide what had only multiplied in middle school.

Eighth grade brought boys taking turns throwing food down my top, seeing if they could score points by landing in the space between my breasts. I wore shirts that were too tight on top but fit well beneath, and that too often meant the top of my chest could be seen by those who towered over me—and at just over 5 feet tall, nearly everyone towered over me.

But any attention was good attention, right?

I couldn’t fit into the badminton uniforms in high school (and, in many ways, this was a blessing, as our coach was far too comfortable making sexist comments and ogling the bodies of the teen girls on our team). I got stuck in countless sports bras, and elected to solve my boob problem in the most uncomfortable way imaginable: I doubled up on the inexpensive sports bras at Walmart and/or wore a sports bra over a regular bra for the support. The latter I took up after a freshman in my honors geometry class made sure the boy I had feelings for knew I was little more than a uniboob, over and over and over again.

Girls changed in the open at school and wore bras that fit them well, that looked cute, and that yes, they often showed off to one another. They wore the school-sanctioned PE swim suit without worries about it fitting them properly. I wore big ugly bras that I hoped no one would see as I did the delicate dance of putting my gym shirt on swiftly while still wearing my normal clothes so not an eye could see it. I could not for the life of me fit into the PE swim suit without my boobs becoming the clear focal point of my body.

It is cruel to require swimming in physical education in high school.

College life with massive boobs—and a major gain in weight, thanks to polycystic ovarian syndrome—didn’t get easier. But I did find it possible to laugh at my situation. Was it at the expense of my self-respect? Maybe, but to this day, my boobs each have a name and, frankly, something about that also makes me respect them more.

A long, hot summer of weeding books at my last job as a teen librarian put a book in my hands I’d never seen nor heard about before, but without needing to read it, I immediately knew the story. And though it hadn’t circulated in any recent memory, I could not remove the book from the collection, knowing someone like my teen self might just find it to be everything.

Dancing in Red Shoes Will Kill You by Dorian Cirrone follows Kayla, a girl who has always dreamed of being a professional ballerina. She’s been dancing for years, despite the elephant in the room. Kayla has massive boobs that don’t fit neatly into a small sports bra, and when she believes she’ll have no problem scoring the leading role in her school’s spring ballet Cinderella, she’s instead cast as one of the ugly stepsisters.

The cover said everything I needed to see right then—and everything my 3rd grade ballerina self, my 5th grade self, my high school athletic self—needed. A girl on red pointe shoes with a pair of pumpkins at her chest.

Boob talk for teens is relegated to puberty books. It’s a discussion on forums near and far on the internet, in spaces meant to give teens a chance to ask their “most embarrassing questions.” Some do give bra recommendations, but, even with all of the resources available it’s not something seen fictionalized and thereby normalized in YA books.

Enter: My Eyes Are Up Here by Laura Zimmermann.

Published this summer, Zimmermann’s debut may have captured my own experience in a way no one ever has before when it comes to being a girl with big boobs.

Greer Walsh wants to live her life entirely inside her head. She’s awesome at math and would love to be known for that. But she’s not. At least, she doesn’t believe she is. Greer thinks she’s known for one thing and one thing only: her massive 30H boobs. When she meets a cute new guy who happens to like her and discovers she has an incredible knack for volleyball, things get complicated and fast.

Her coach recommends a bra to her called The Stabilizer. It is hard not to understand what that means when your entire life has been about finding The Stabilizer. It’s a strap-on-strap-on-strap contraption that doesn’t slide on nicely for the big chested. It requires a second or third set of hands to get on correctly and, one hopes, doesn’t suffocate you in the process (or, in my case, gouge out an eye in yoga inversions with the massive wires at the gore).

It’s a bra that Greer can’t pick up at the local store nor try on. It’s a bra that she has to ask her mother to purchase for her online because teens don’t have credit cards to do the purchasing themselves.

And it’s a bra she’s grateful for because it allows her to feel supported and one she’s ashamed of because it’s not cute, little, nor easy to navigate.

Greer can’t fit in the volleyball uniform. It’s too tight at her chest, despite the insistence from her coach it’ll fit. When it doesn’t, she has to find a solution that’s creative and allows her to play ball. She does—until she doesn’t. She can’t go clothes or dress shopping with her friends because nothing fits her across the chest without becoming a pool at her midsection, if she can pull the top on at all.

She, like me, wastes money on cute bras she can’t stop thinking about, that are marketed as for “larger chests,” knowing that it won’t fit, no matter what.

The dance Greer can’t wait to attend with the new boy? She cancels because she can’t find a dress that fits, and it’s a shame she feels burdened by when she tells him the truth. It’s not him. It’s her.

Except, they are. Especially to a teenager.

I was a 30H in high school. I didn’t know that at the time because in those days, no one understood how bras should fit or that a D or DD is a pretty average size. On the body of a high schooler, an H cup is big, no matter your shape.

Size isn’t the only determinate of what is big. If you haven’t had boobs before, haven’t navigated the reality of trying to fit into what your peers or teammates are fitting into, haven’t navigated the reality that your body now belongs not to you but to anyone who sees your upper chest fat deposits as theirs to talk about, to make jokes about, to treat with disrespect.

That as a teenager, even in the Chicago suburbs where both Greer and I went to high school, you don’t have access to credit cards, to the exorbitant amount of money it costs to purchase a bra that fits, to the confidence to ask for help relating to a body part that’s overly sexualized.

Too often, the conversation about big boobs is of reduction. For many, this is a real solution, be it for physical or preferential reasons.

But for others, like me, the suggestion of reduction of a part of my body which doesn’t cause me pain and is healthy acts as a sharp and pointed reminder that my body lies outside the imaginary norm and needs to be molded to fit within it, rather than demanding the world accommodate me.

Every October during Breast Cancer Awareness Month, we’re reminded to wear pink. To fight for a cure.

To save the boobies.

But for people like me—for people like Greer and Kayla and the myriad others who haven’t seen their stories on shelf—what about putting the people first? What about creating space to fit us, rather than making us fit the space? Why is it the only time we’re comfortable with discussing a part of the body is when we’re discussing a disease that wreaks havoc on it?

Today I roll my shoulders back and wear a $5 sports bra that doesn’t fit when I do yoga. It does nothing “for” my boobs.

Except, it does everything for my boobs. I can move them to twist my body, let them air out when I hang upside down, allow them to bounce when I jump and walk and swing my torso.

I can buy prettier, better fitting bras now. I’m a grownup with a paycheck and access to the internet. But Greer and her story took me back to each of the milestones of my life with breasts in a way that reminded me how little we’re open about our body struggles and how many of those struggles are not ours to bear alone—they’re struggles created by a culture too prude to be real, too scared to be open, too determined to be critical of the experiences of others, and too buttoned up to accept that letting it out is not something of which we should be ashamed.