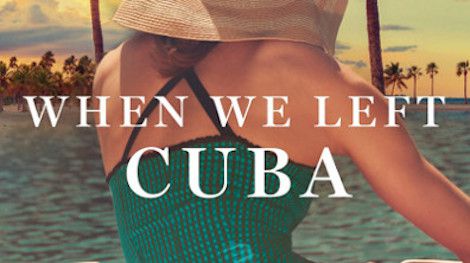 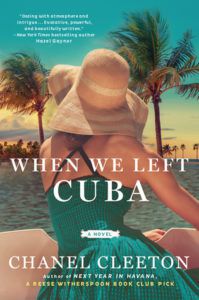 Chanel Cleeton, author of Next Year in Havana, recently released the highly anticipated companion novel When We Left Cuba which is set to be a Reese Witherspoon book club pick for 2019. This book follows Next Year in Havana’s protagonist Elisa Perez’s sister, Beatriz Perez, during the 60s once their family immigrated to the United States after the Cuban Revolution.

Full of action, suspense, and important discussions centered around heartbreaking Cuban diaspora woven into the narrative, here are five more reasons to pick up Chanel Cleeton’s latest release to read on a warm spring day!

1. When We Left Cuba is full of espionage

What makes this novel stand out against its predecessor, Next Year in Havana, is that Beatriz is recruited by the CIA in a top-secret mission to assassinate Fidel Castro. In the midst of Beatriz navigating her new life in America, she eagerly accepts this quest to take revenge on the man who took control of her country which led to her fleeing her homeland.

When We Left Cuba is full of close-calls and Mission-Impossible-y moments that will leave readers on the edge of their seats, waiting to see if Beatriz completes her near-impossible mission.

2. Beatriz grapples with her Cuban diaspora as she lives in the U.S.A.

While Next Year in Havana showcases what Cubans felt like when they were forced to make the decision to leave their homes after the Cuban Revolution, When We Left Cuba explores the diasporic thoughts some Cubans had once they fled their island and were forced to make a new life in a vastly different nation that they felt they didn’t belong in.

The longing Beatriz has to return to her home and her life back in Cuba is heartbreaking and is something many people will be able to relate to. It is something I’m happy to see in literature. While I was not born in Cuba, I still related to her feeling of being helpless in freeing Cuba from its communist rule, along with her ache to go back to the island she longs to call home again.

3. Beatriz Perez is a femme fatale Dead set on making a name for herself

If you’re looking for a novel following a confident, independent, and sauve protagonist, look no further. Beatriz Perez is a firecracker whose strong personality shines through in this novel.

She loves dressing up in gorgeous gowns that draws too much attention to herself. She isn’t afraid to use her good looks to fool others during her missions. And, she reminds me of a film noir star in the way she rises above the male-dominated field of the CIA, defying everyone’s expectations of her.

Beatriz is a character sure of her intelligence, beliefs, and dreams, and will do everything she can to get her way. She is a character who inspires me to speak my mind, keep my chin up, and always fight for what I believe in. She is a protagonist who will quickly become the talk of the town amongst readers.

4. When We Left Cuba is a vividly written historical fiction set during the 1960s

Seeing this time period as a backdrop for a historical fiction novel was a nice change of scenery, especially because readers get to see Beatriz’s fresh perspective as a Cuban-immigrant who is witnessing these important moments that shape the course of history forever.

5. A slow burn, forbidden romance? What more could you ask for?

Not only does this novel have undercover operations and important discussions about being a Cuban immigrant, but it also has an intense forbidden romance that shapes Beatriz’s character and helps her grow and learn what she wants out of life.

This intense, all-or-nothing romance tests her limits, her drive to return back to Cuba, and what she wants to accomplish now that she’s beginning a new life in America. Chanel Cleeton never fails to write an angst-filled romance that isn’t just there to lighten the mood but exists to help her characters discover more about themselves and what they want out of life with the ones they fall in love with.

When We Left Cuba by Chanel Cleeton is out now, for those interested, and is one diverse historical fiction novel that should not be ignored!