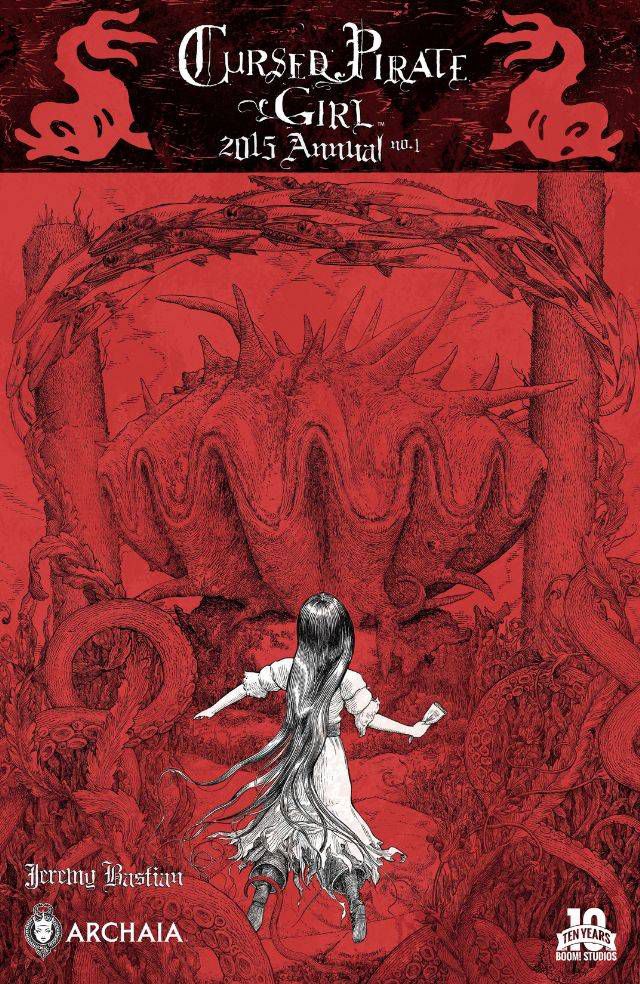 Last week, the first annual installment of the second part of Cursed Pirate Girl came out, and guys, it’s awesome. I understand that sentence might be confusing, so let me clarify: in 2010, after a successful Kickstarter campaign, Jeremy Bastian published a graphic novel called Cursed Pirate Girl. Now, we’re getting the continuation of her adventures in the form of the first annual publication, which is 52 beautiful new pages. Eventually, four of the annual issues will be combined to make Cursed Pirate Girl Volume Two. Here are some reasons why you should get really into it, like right now:

I mean, it is knock-me-over-with-a-feather gorgeous. Every page looks like an illuminated manuscript, or one of those vintage kids’ books that are so fantastically illustrated that you’re like, “Man, why don’t kids’ books look like this anymore? Today’s kids are soft.” With art like this, it’s understandable why Bastian has to released it in annual installments: this stuff takes time! It’s so intricate, and there are so many details to admire on each page.

You know those books that you read once and love, but never pick up again? Don’t let Cursed Pirate Girl be one of those. I’ve read through it three times since I picked it up last week, and every time, I see something new and different in the many layers of art and story that I hadn’t noticed before. In my opinion, one of the best parts of this book are the quiet, hilarious asides from side characters, like, “Maybe I shouldn’t have called him the Library Clam,” and “Fear not, Pepper Dice! Tis not their feasting season. I am quite certain that the 216 year cycle of devouring all wayward midst ended… last Tuesday.” See? Even without context, those are great.

Look at those three words together! Aren’t they awesome? Each one makes the story better than the last. She’s cursed! She’s a pirate! And she’s a girl! And she’s not some wimpy little thing, she’s the hero of this story and her pirate-ness is REAL. She doesn’t back down from pirate adventures. She leads the way! Plus, it’s appropriate for all ages, so if you want to give it to your 12-year-old sister and say, “See? Girls can be cursed pirate badasses, too,” you can totally do that.

(4) The Creatures, THE CREATURES

There are walking, talking creations in this book that I have never even IMAGINED before. They literally look like those creatures that scientists discover at the bottom of the sea, and you’re like, “Is that an alien?” But instead of dwelling in the dark depths, the creatures in Cursed Pirate Girl have surfaced from some distant recess of Jeremy Bastian’s brain. The book is so imaginatively illustrated, it’s insane. It’s obvious that drawing this book and coming up with the characters would be a blast, and it’s always fun to read something that was fun to make.

(5) The Story Is Awesome

At one point in the first annual volume, you might find yourself getting misty-eyed over the fates of a couple of insanely tall, skinny sea… knights? Once you get used to the script and the layout of the pages, the story is pretty captivating. Although this is the first part of the second volume, they play catch-up for you in the beginning, so it doesn’t feel necessary to have read the first volume (which is good, because the first volume is, like, completely unavailable. Come on, ARCHAIA!). And it ends on such a cliffhanger! I NEED TO KNOW WHAT HAPPENS NEXT!