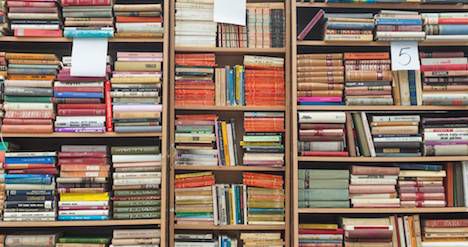 There’s an ongoing argument I periodically have with myself that I can’t seem to resolve. Do we need the LGBTQ books section in bookstores? Of course, when it’s nonfiction about LGBTQ history or politics, that makes total sense. That section is usually near Sociology. But there’s a variation of the section that encompasses a variety of books by LGBTQ authors or about LGBTQ characters, even when that’s not their main focus. Is separating these books out discriminatory, or is it helpful for readers? Or both? To try to settle this once and for all, here are 5 reasons to get rid of the version of the LGBTQ section that includes fiction. (… And one good reason to keep it.)

Segregating LGBTQ authors and characters to their own section creates a division between “normal” fiction (i.e., straight and cis) and LGBTQ fiction. It suggests that these books aren’t for your average reader: they’re only worth reading if you’re specifically seeking out LGBTQ content.

Separating out LGBTQ fiction means that those books are not browsed as often, and are therefore less likely to be picked up. That means fewer sales. Conversely, shelving LGBTQ books next to straight books means that some of those titles may be picked up by readers who would never have consciously sought about LGBTQ content, but are perfectly happy to read an interesting story that has LGBTQ characters.

Having fiction divided by what their main character identifies as is a nightmare to shelve. How are you supposed to know just by glancing at the description whether a book has LGBTQ content? How much LGBTQ content is enough to justify shelving it elsewhere? And what about LGBTQ authors that are well known and popular? Does all their work go in the LGBTQ section, or do you get to go in the “normal” fiction section if you’re popular enough?

4) It makes it harder for closeted people to get LGBTQ books.

Even readers who are to some extent out may feel uncomfortable browsing in the section with the giant GAY AND LESBIAN sign. I am just about as out as you can get, and I still sometimes get a brief moment of nervousness about approaching those sections. Someone who is closeted is going to have a much harder time walking over to those shelves, and they’re likely the people who could most use those books.

5) The selection is usually terrible.

For stores that have an all-genres-included LGBTQ section, the shelf usually does not look appealing. I can’t tell you how many times I’ve tracked down the half shelf of LGBTQ books in a bookstore (or, let’s be honest, the “Gay and Lesbian” section) and had it be one decades-outdated history book and 12 unappealing erotica titles. Because the popular authors tend to get grouped into general fiction, what’s left is usually older, less popular titles. It’s disheartening to see yourself reflected in such a paltry selection, and the underlying message seems to be “You’re so desperate for representation that you’ll take anything.” And to be honest, there was a point where that was true for me as a reader. It leaves a bad taste in your mouth.

So that’s that, then. We should integrate LGBTQ fiction into general fiction and keep the LGBTQ section for nonfiction specifically about LGBTQ topics. Seems pretty obvious. Except… I’m not sure that it is. Because, to be honest, one of my favourite places in the world is the lesbian fiction aisle at Powell’s. So just to keep things confusing, here is one reason to keep the LGBTQ fiction section:

Yes, closeted readers may be hesitant to approach the LGBTQ section, but at least interested readers would know where to look. Sometimes trying to find LGBTQ books takes a lot of detective work, and it takes a while to get to know those tells. (Look for these publishers, this author blurb, this ambiguous use of pronouns on the back cover…) Readers who are first seeking out LGBTQ books can find it difficult to discover them, and it’s a relief to be able to just browse a shelf without having to bring a list of every LGBTQ author and title ever published and hunt through the general section.

So, I still feel divided. Practically, having an LGBTQ section is the most useful thing for readers interested in LGBTQ content. But in a broader context, it’s othering. One solution I’ve seen was also at Powell’s: their teen section had LGBTQ books shelved in the section, but with rainbow tags making them more obvious to spot. Of course, this can also been seen as othering. Would Fingersmith by Sarah Waters get a rainbow flag if this strategy was implemented in the fiction department? Would The Color Purple?

I don’t have the answer. Which means I guess I’ll be revisiting this internal argument in a few weeks. And hey, maybe next time–maybe the 522nd time–I’ll figure it out.