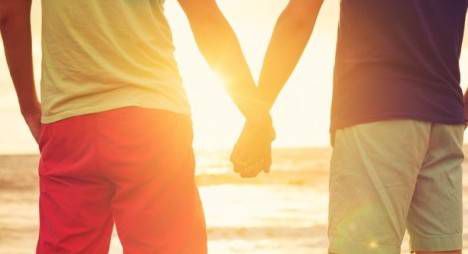 Brutal fight sequences, unrealistic melodrama, heart-wrenching loss, and cartoonish, over-the-top villains are comics staples. And by “comics,” I mean the industry—forget what’s on the page.

Trusting companies is tough and ill-advised; trusting companies with matters of LGBTQ representation is why I wake up screaming at night. Between fits, however, I have found solace. Several comics publishers, by fostering queer talent and keeping an eye towards diversity, have earned my trust as a queer fan. Here are several I’d recommend. 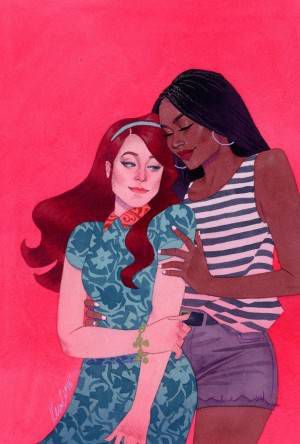 While decades-old publishers are still struggling with baby steps towards queer representation, Rosy Press—which launched just a year ago—has been inclusive from the get-go.

Janelle Asselin, a queer woman herself, is the publisher of Rosy Press and architect behind Fresh Romance, a monthly, primarily-digital romance anthology. Many queer comics creators—Kate Leth, Sarah Winifred Searle, Kevin Wada, Trungles, Taneka Stotts, Marcy Cook (full disclosure: a writer at Panels)—have had or will have work featured in Fresh Romance.

Fresh Romance is now currently crowdfunding a Kickstarter-exclusive print collection of its first stories, which include “School Spirit.”

Throw a rock in any given direction at BOOM!’s publication slate and you’re bound to hit a book starring queer characters (metaphorically, please don’t throw rocks at people IRL).

There’s Lumberjanes, a series starring girls (at least three of whom are queer) exploring friendship and supernatural shenanigans at their summer camp. There’s The Woods, another comic about (primarily) queer teens trying to survive supernatural woods on another planet—and to much more lethal stakes. There’s Cognetic and Memetic, two separate but thematically-linked miniseries about queer leads navigating unique and unnerving apocalypse scenarios.

Help Us! Great Warrior, Bravest Warriors, The Spire, and We(l)come Back join this already impressive list.

These stories would not exist were in not for queer creators and editorial members—including Noelle Stevenson, James Tynion IV, Shannon Watters, and Grace Ellis—who breathe them life.

Anything That Loves edited by Charles “Zan” Christensen, cover art by various.

With most publishers, fans have to rely on word-of-mouth to find queer stories by queer creators. Reading a solicit or looking at a cover won’t necessarily always tell prospective audiences if the character staring back at them is queer.

Since the business of Northwest Press is queer comics, that’s no concern.

In its relatively short lifespan (it was founded in 2010 by Zan Christensen), the publisher has produced several queer anthologies, anti-bullying stories, and multiple award-winner comics. It’s highest-profile project is Anything That Loves, an anthology exploring sexual identities beyond the gay/straight binary.

Hard to Swallow, an anthology containing ten years of gay male erotica, earned over $20,000 in funding last month on Kickstarter.

In truth, Oni Press was not really on my radar before 2015. I’d heard of it and was actually reading one of its series, The Bunker, slowly over trade. Otherwise, we were two ships passing each other in the night.

Then, in early 2015, the publisher announced that it’d be opening up to open submissions—with a special focus on diverse creators and stories. Months later at San Diego Comic Con, they also announced several new (unaffiliated with the open submissions) series—Another Castle, The Mighty Zodiac, Over the Surface—that appeared diversity-friendly with creators, characters, and tone.

This newfound goodwill has prompted me to better notice Oni’s present and future queer offerings. Scott Pilgrim and Hopeless Savages are past critical darlings with (supporting) queer characters; current and future series Another Castle, The Bunker, and Merry Men all feature LGBTQ diversity either on or off the page (or both!). Upcoming print editions for Wet Moon and Fresh Romance (in partnership with Rosy Press) provide the same.

Agents of the Realm vol. 1 cover by Mildred Louis

Any conversation about queer comics that leaves out webcomics is a sham. While traditional publishers tend to their dinosaur farms (that wasn’t meant to make them sound cool), independent, otherwise ignored voices have been forging ground on the digital frontier.

Hiveworks is a publisher—albeit not in the usual sense—of webcomics. Independent webcomics creators choose to align their series with Hiveworks and, in turn, get focused support without editorial interference. Webcomic owners no longer have to go it alone; through Hiveworks, they get mentorship, advertising, and boosted visibility.

Many of the webcomics supported by Hiveworks feature a mix of queer stories and queer creators. Sister Claire, Agents of the Realm, Sfeer Theory, Balderdash, Go Get a Roomie!, Knights Errant, and Sparkler are just a few. Mildred Louis’s Agents of the Realm recently concluded its volume one Kickstarter where it raised over $30,000.