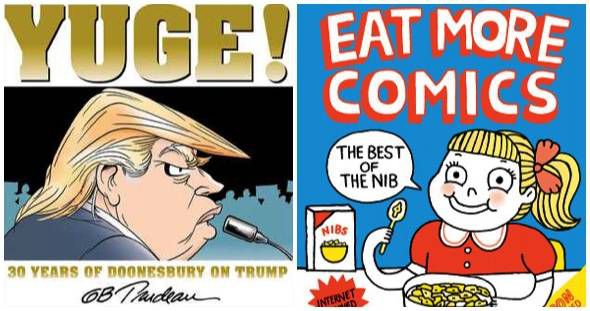 Political cartoons show up in our lives all the time, even if we barely notice them. They’re published in newspapers and magazines, shared on Facebook and Tumblr, and even make appearances in history books. These bits of commentary make the rounds as soon as they’re created, then disappear when the next news cycle hits. Leaving it at that, though, is a big mistake. When we go back to a political cartoon later, whether it’s been a month or a decade, they provide some of the most insightful looks at history. They aren’t detached and logical, but emotional and present, conveying social attitudes, frustrations, and concerns people were experiencing in that moment. And they usually do it in only a few panels. These five collections are some of the most interesting and entertaining looks at American society. 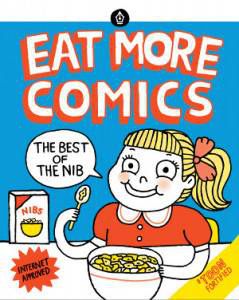 Eat More Comics by The Nib; Editors Matt Bors and Eleri Mai Harris: The Nib was formed in 2013 by Pulitzer Prize finalist Matt Bors. Part of New Look Media, The Nib publishes editorial cartoons and comics online, using work from many independent artists – a refreshing change from the long newspaper tradition of having just one or two staff cartoonists who did all the cartoons. You’re probably familiar with them even if you don’t realize it since so many of their political cartoons have gone viral and been posted all over social media. Eat More Comics is packed with everything from powerful single page cartoons to long-form nonfiction comics. It’ll keep you thinking for days.

They Shoot Black People, Don’t They?

by Keith Knight: Keith Knight is an icon of black political commentary and comics. Most recently Knight has been applauded for his police brutality comics – which he has been making for more than two decades. Bringing these comics together began as a presentation Knight gave at conferences. Lucky for us, he’s compiled it with additional content and commentary. Knight’s work is a perfect example of what we can learn from political cartoons. While the mainstream media is realtively new to the issue, these cartoons are undeniable proof of a longstanding problem. 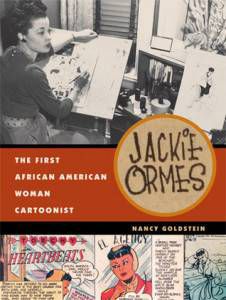 Jackie Ormes: The First African American Woman Cartoonist by Nancy Goldstein: This one is a little bit of a cheat because it isn’t JUST comics, it’s also a prose biography of this amazing woman. Unfortunately, this is the only book that gathers a significant amount Ormes’s work. Jackie Ormes has been all but forgotten by history (like many black women), but she is one of the most important voices in political cartoons. Ormes was part of Chicago’s black elite after WWII, mingling with stars and politicians. Her bitingly funny and whip-smart work was published in landmark black newspapers like the Chicago Defender and Pittsburgh Courier. She was wildly popular. The author includes captions that put each cartoon into historical and political context, though many of them speak for themselves. Seeing the issues of this time period through the eyes of a black woman living them firsthand is priceless. 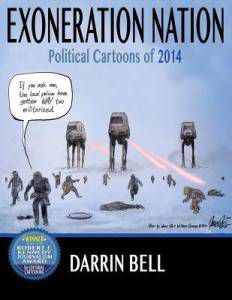 Exoneration Nation: Political Cartoons of 2014 by Darrin Bell: Darrin Bell won the 2015 Robert F Kennedy Award for Editorial Cartooning, and if you are familiar with his work you’ll know why. Bell can put out hilarious political cartoons, but he never shies away from vividly depicting difficult topics. His work reminds me of something I once heard Gene Luen Yang say, “You can’t hide anything in comics.” The large, full-color printings of his comics enhance their beauty and power. This collection is Bell’s most recent book, but he continues to create and share his brilliant work online. 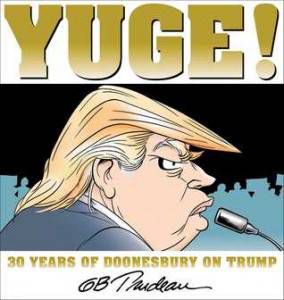 Yuge!: 30 Years of Doonesbury on Trump by G.B. Trudeau: My personal feelings for the political cartoon Doonesbury wax and wane but this collection is something singular. Doonesbury has been commentating on the current presidential candidate for literally my entire life. The picture drawn is not a flattering, and Trump has made his dislike of Trudeau clear. Regardless of political opinion, this collection is an unprecedented first-hand look at a candidate’s image over time.