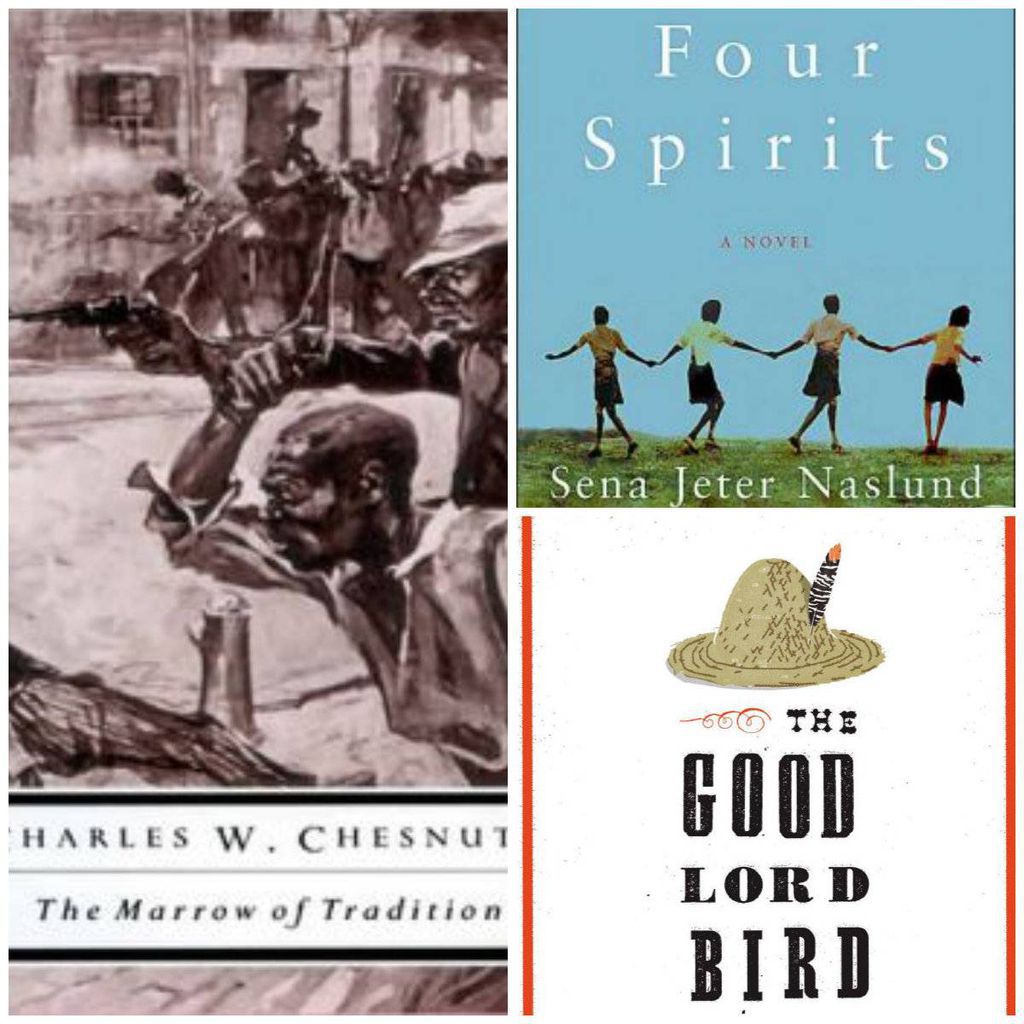 As I watched events unfold in Missouri in recent weeks, mostly via Twitter, my thoughts turned to books. I’m not the only one. Susie wrote a very personal post titled “Reading Helped Me Overcome a Racist Upbringing,” that I could identify with on multiple levels. Brenna shared a list of 5 Good Books About Race in America. It’s a pretty stellar list. I have been thinking about fiction, however, and the lessons that can be learned from the pages of novels. I would have said “from the imaginations of authors,” but these stories were all inspired by real events. They are not true stories, but they are full of truth.

The Marrow of Tradition by Charles W. Chestnutt

A fictionalized recounting of the Wilmington Race Riot of 1898, The Marrow of Tradition offers a powerful and harrowing look at many of the political and racial tensions looming in turn-of-the-century South Carolina. Largely drawing upon his own relatives’ first hand accounts of the massacre, Chesnutt used this historical novel to refute many of the misleading, sensationalized spins on the tragedy that were prevalent at the time. Notable for introducing the public to the nuances of propaganda and yellow journalism, The Marrow of Tradition remains one of the most poignant and historically accurate novels ever composed about the postbellum South.

I first read this novel in college, and I almost didn’t give it a shot. But I did. I read it, and it ended up being my first positive experience with historical fiction. I trusted it in a way that I never had trusted a novel before. It was refreshing to learn about history from the perspective of those who came out on the losing end. It’s nice to know that this novel helped to set the record straight.

Henry Shackleford is a young slave living in the Kansas Territory in 1857, when the region is a battleground between anti- and pro-slavery forces. When John Brown, the legendary abolitionist, arrives in the area, an argument between Brown and Henry’s master quickly turns violent. Henry is forced to leave town—with Brown, who believes he’s a girl. Over the ensuing months, Henry—whom Brown nicknames Little Onion—conceals his true identity as he struggles to stay alive. Eventually Little Onion finds himself with Brown at the historic raid on Harpers Ferry in 1859—one of the great catalysts for the Civil War.

Of the three books on this list, this is by far the most light-hearted.  It is not, however, any less revealing. It has been compared to Huck Finn and with good reason. It manages to entertain, inform, and offer commentary. Because of his age, Henry is able to say things that an adult would not. He is also able to see things from a different perspective, and he is able to see them more clearly than the adults around him. I listened to The Good Lord Bird, narrated by Michael Boatman, and I highly suggest you do the same.

In Birmingham, Alabama, twenty-year-old Stella Silver, an idealistic white college student, is sent reeling off her measured path by events of 1963. Combining political activism with single parenting and night-school teaching, African American Christine Taylor discovers she must heal her own bruised heart to actualize meaningful social change. Inspired by the courage and commitment of the civil rights movement, the child Edmund Powers embodies hope for future change. In this novel of maturation and growth, Naslund makes vital the intersection of spiritual, political, and moral forces that have redefined America.

Comparisons to the events that occurred in Birmingham during the height of the Civil Rights Movement have been made frequently in discussions of the protests in Ferguson.  This story imagines what it was like to be involved in the conflict for two young women, one white and one black. Looking through both sets of eyes offers a unique and interesting perspective on what it might have been like to live through those tumultuous times. It is a book that gets under your skin. It certainly has stayed under mine.

I chose to focus on books that were based on historical events, but there are many, many books that address the issue of race in America from all sorts of different perspectives. Which ones stand out to you?