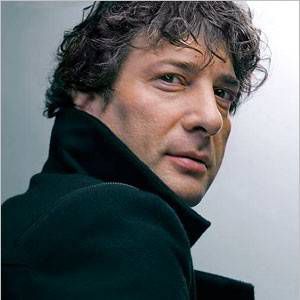 However, instead of creating a list of Neil’s books with hyperbolic complements to get you to purchase them, I will write a list of things that I think Mr. Gaiman would like us all to do for him.

As a birthday present.

Neil says that Susanna Clarke’s wonderful novel is “the finest work of English fantasy written in the past 70 years.” It’s about magic in Victorian England, not a flashy kind of magic, but a kind of magic that you have to study for years, and only use responsibly and never in polite company.

It has fairies in it, as well, and not the cute ones with glitter and wings but the accidentally mean ones that whisk people off to fairyland. The gray, grim fairyland from which there is no escape.

I once remarked to him on Twitter that the world would be a better place if more people read the book, to which Neil himself replied “Yup.” (True story.)

It’s been made into a TV series, but we all know that the book is better than the series.

Neil Gaiman was recently invited to Jordan by UNHCR to see first hand what life was like in a refugee camp. He wrote about it for the Guardian.

“I came away from Jordan ashamed to be part of a race that treats its members so very badly, and simultaneously proud to be part of the same human race as it does its best to help the people who are hurt, who need refuge, safety and dignity. We are all part of a huge family, the family of humanity, and we look after our family.”

Things have not gotten better since Neil was there, as we see most nights on the news. War is forcing people to flee their homes with their families in an attempt at a peaceful life somewhere else. Seriously, please consider donating to the UNHCR.

3. Read We Have Always Lived in the Castle

This is another book that I happen to know is one of Neil’s favorites. When I finished reading it I thought “This is precisely the sort of thing Neil would like, the sort of funny/disturbing atmosphere he tries to achieve in his books.” So I tweeted at him (like one does) and said that I was pretty sure We Have Always Lived in the Castle was one of Neil’s favorite books. He answered.

So yeah, maybe check that book out if you haven’t already. It almost seems like he could have written it.

Like almost all authors, Neil likes libraries. And so of course he is strongly opposed to closing them.

“Libraries really are the gates to the future. So it is unfortunate that, round the world, we observe local authorities seizing the opportunity to close libraries as an easy way to save money, without realising that they are stealing from the future to pay for today. They are closing the gates that should be open.

So what you can do for Neil, on his birthday, is to go to your local library, especially if you’ve never been there, look around and take out a book you’ve always meant to read.

5. Take time to read to your kids

“We have an obligation to read aloud to our children. To read them things they enjoy. To read to them stories we are already tired of. To do the voices, to make it interesting, and not to stop reading to them just because they learn to read to themselves. Use reading-aloud time as bonding time, as time when no phones are being checked, when the distractions of the world are put aside.”

I love that sentiment. And I’m going to read to my kids tonight, after turning off my phone.

Now, pick one of the things from the list and do today as a gift to Mr. Gaiman. And let us know what it is you picked.

The quotes in items 4 and 5 are from Why our future depends on libraries, reading and daydreaming, a lecture Neil gave for The Reading Agency in London in 2014.