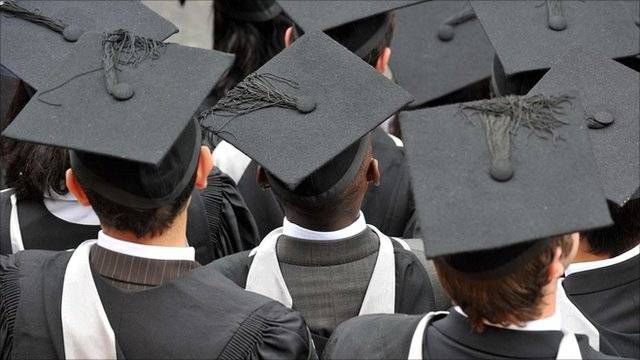 A fellow teacher once handed me a list titled “Books Every High School Student Should Read.” The idea was that the books in that list would fully prepare students for the philosophical and literary rigors of college. Which is great, except that (A) not every kid is going to be an English major (the books were all novels), and (B) the list had at least 250 books on it, which, I mean, come on.

For a couple of years, I hung the list on my board, highlighted the ones I’d read (maybe 50), and invited students looking for a book to read to rifle through it. Extensive though I know the list aimed to be, I think it ended up kind of shortchanging a lot of the students because of its basic narrowness. When I started thinking about what books might be more generally helpful for a graduating high school student, I narrowed it down (probably too much, but hey, manageability is a virtue in its own way) to these five.

And yes, I started with a novel. Of course I did. (I was an English Major; I can’t help it.) 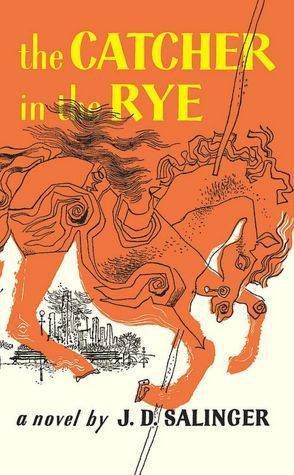 I know, I know. To paraphrase Jack Black’s character in High Fidelity: how about side 1, track 1 of the Fifth Symphony? Obvious though it may be for any discussion containing the words ‘book’ and ‘high school,’ it’s obvious for a reason: Salinger’s Holden Caulfield resonates with high school-aged kids as much as any character in literary history. That sentiment doesn’t necessarily have a long shelf life, though, and I’ve spoken to a lot of people who, in coming to Catcher later in life, find Holden unbearably whiny and Salinger’s style self-indulgent. Even people who read and really liked the book at a younger age sometimes sour on it over time.

Not me. I still hold a lot of admiration and affection for Holden and Catcher, due in large part to the special kind of impact the book has had on many readers who, like me, encountered it in those particularly vulnerable and earnest (Holden’s lack of irony – conscious irony, anyway – has always endeared him to me) years. Before you head off to whatever post-graduation future awaits you, take the opportunity to reach out to the novel and its protagonist, both of which       have a lot to offer readers at that particular moment in life. Get in on it while the getting’s good. 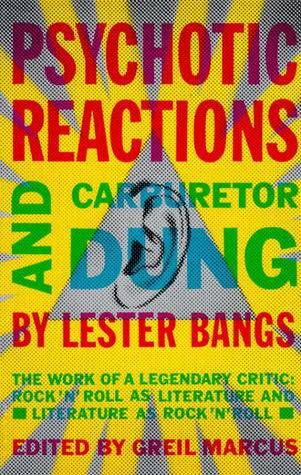 Here’s the thing: I spend about seven hours a day around high school students, and most of them are woefully uncritical of the music they listen to, the movies and television shows they watch, etc., etc. These books, or any like them – go with a more contemporary writer if you’d feel more comfortable working backwards from the present – give us a glimpse of people who felt a desperate need to wrestle with the popular culture of which they are a part, who think about it in the kinds of deeply personal (and frequently entertaining) ways that make it feel powerful and substantive. My post-high school years were defined in no small way by my ever-widening forays into the kinds of stuff Marcus and Bangs and Kael were writing about, and it feels good to have partners on an expedition like that. 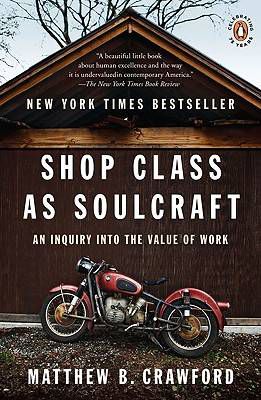 Shop Class as Soulcraft by Matthew B. Crawford

I never took shop class. I’ve never changed my own oil or planed wood or, frankly speaking, done anything more handy than hang a picture or put together furniture from a box (badly, most of the time). I remember thinking in high school that the value I placed on intellect above all else was a virtue, that my brain would keep me from having to work with my hands, like my dad and grandfathers did. But this book argues for the value of what Crawford calls “manual competence” (working with your hands, basically) and bemoans the widening gap between the machines we use and our understanding of them. Basically, he sees it as getting to, rather than having to, work with our hands, something I never understood or appreciated growing up.

I know a lot of kids who go to college because it’s the logical next step and not because they have a clear sense of their academic path. I also know a lot of kids who don’t go to college, but don’t really know what to do with themselves. Crawford’s book might be useful for both. By trying to diffuse what he sees as a stigma against the trades and highlight the agency and satisfaction derived from building or fixing something for ourselves, he opens the door for a lot of people looking for a way into the working world and feeling as though the information economy has locked them out. 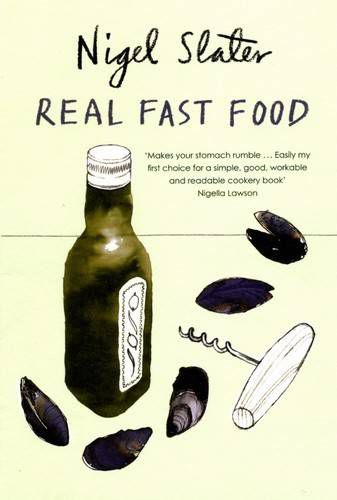 I bemoan the increasingly frequent disappearance of “practical living” courses from our public high schools. Here, right now, as I type, I’m bemoaning it. I’m half-a-step from gnashing my teeth, I swear. When I left high school, I had under my belt a wonderful class called Foods and Nutrition, which, much as the name suggests, taught students about wise dietary habits and offered us a chance to actually get into the kitchen with ingredients we’d order at the end of each week for the next week’s cooking project. I learned to cook a fair few recipes, which helped save me money and allowed me to get by on something other than late-night cheeseburgers and orange soda.

This cookbook won’t necessarily replace the loss of a good practical living course (thanks Mrs. Miller!), but it’s designed with a lot of the same broadly applicable cooking principles that Foods and Nutrition stressed. For one, all the meals are designed to be cooked in thirty minutes or fewer, and there are these great little single-page sections with titles like, “Things to Mix into Rice” (Which, while we’re here, why is that not the title of its own book?). In all seriousness, being able to cook will save you a great deal of money and will likely help stave off the infamous “freshman fifteen.” 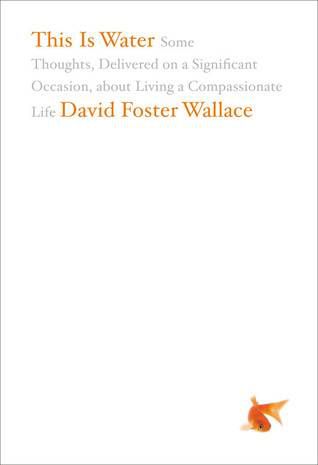 This is Water by David Foster Wallace

OK. So, I wasn’t going to include this. After all, I just did a post on commencement addresses by writers and included a link to the text of DFW’s masterful speech. But then, like I do every year before the school year is out, I read my students the entire thing. By the end, it felt like everybody in the room was holding their breath. They react to this piece like they react to nothing else we read all year. Last year, I had a student come to my room after school and thank me for reading it to them. When I asked him to write a few words about why it connected with him for use on my blog, this is what he wrote:

As a high school student stuck quite literally with the same people every day, watching them hurt themselves, others, and me, it is extremely easy to assume that others are just bad people, poorly reared, insensitive, etc., even though there are millions of other factors to consider when reacting to others. Wallace’s speech had a positive influence on my life because it spoke the truth, a truth we often write off as too much work despite its rewarding spoils: life can get discouraging, but if I choose to see the best in others, to see that the worst may not be their fault, to see the glass full, to learn from the painful past, and to see the future as big, bright, full, and even maybe happy, then I can change the world for the better, and maybe keep my sanity and reputation while doing so.

Maybe it’s idealistic to hope for this kind of reaction from every graduate who hears the speech or reads the book. But isn’t idealism kind of what high school graduation is supposed to be about? Aren’t we, in that moment, supposed to be filled with the kind of hope for humanity that might be possible if people followed DFW’s advice? This book gives all of us – freshly minted graduates and those for whom high school is well in the rear view – a chance to go back to that moment whenever we want.

P.S. – After reading it this year, a student made this doodle and brought it to me. Cool, no? 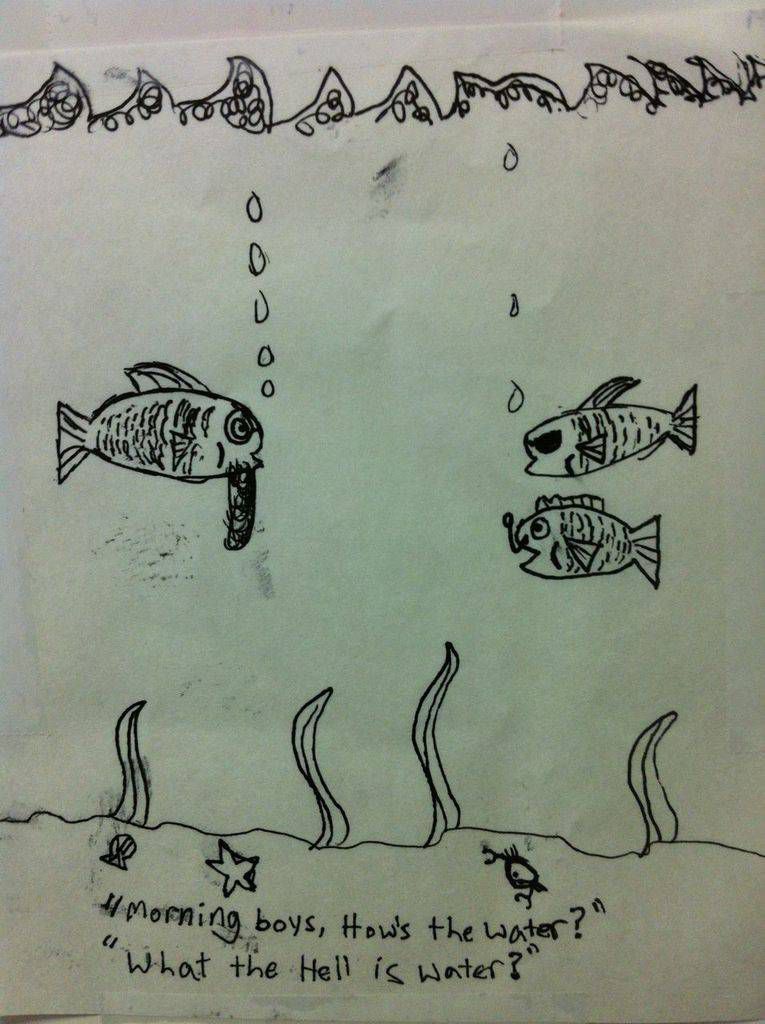