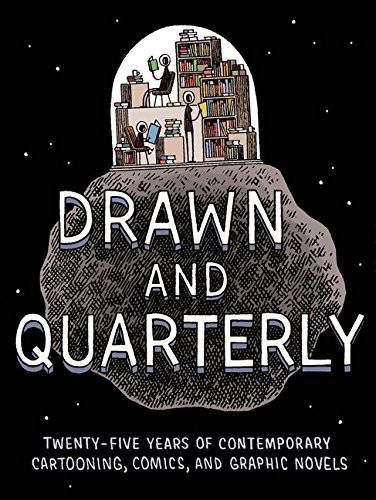 Drawn & Quarterly is a Canadian publisher with a strong reputation for providing work of high artistic and production quality. This book is an anthology of work old, new, and rare that includes essays from a number of well-known authors, artists, and experts. I’ve only had a peak at the massive tome (referred to as an ‘eight hundred page thank you letter’), but that was enough to tell me this is a wall-to-wall of masterworks I don’t want to miss out on. Out June 2.

If you have been holding out on Gotham Academy, now is the time to grab it. The team on this book have managed to capture the signature shadows and intrigue of Gotham while injecting more fun and levity than can usually be expected from DC. Perfect for fans all-ages comics and more kid-friendly versions of Batman. It’s like Scooby-Doo, if Scooby-Doo went to a Manga private school and had a secret vendetta against Batman. Get it June 23 from, of course, DC Comics.

Told in four different eras – from 1940 to 2050 – Bodies is a murder mystery with a fascinating twist. Using a different artist for each time period makes the book a visual feast that invokes a monochrome Sherlock Holmes as well as technocolor sci-fi. This is one of those series particularly well suited to being read as a trade instead of in single issues. Out June 16 from Vertigo.

Many fans are probably well-aware that the third volume of Marvel’s freight train of popularity is out this month. Normally Volume 3 of a series isn’t something to make a big fuss about, but Kamala’s star just keeps on rising and this story line brings new artists and new (to Kamala) villains to the table. Plus, this is another title I love waiting for in trade, since I just can’t get enough of Kamala one issue at a time. Coming June 23 from Marvel.

ODY-C, in case you haven’t heard, is a retelling of The Odyssey set in space with the genders all broken loose from their originals. The writing is carefully and deliberately constructed, maintaining the elements of epic poetry while building a vast and complicated new world in space. The art is epic all on its own, practically exploding off of every page and drawing you into an enchanting fever-dream galaxy. Get it from Image on (yep) June 23.