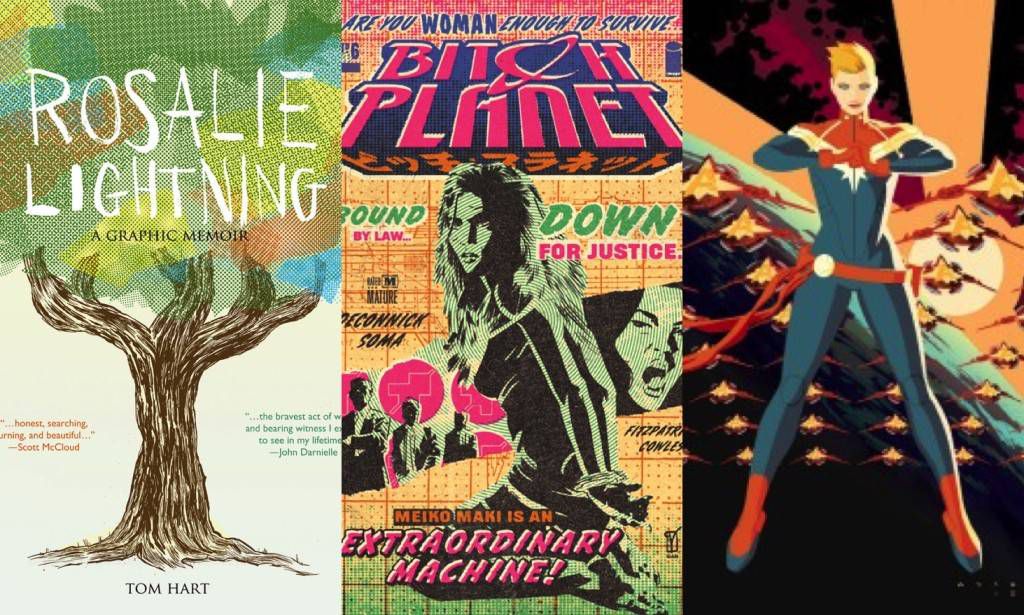 Each month, we bring you 5 intriguing comics—whether destined to become bestsellers or under the radar—that you should keep an eye out for.

Hey, remember Bitch Planet, one of Panels’ favorite series of 2015? Well, it’s back, after a three month hiatus. Since this is an issue divisible by three, we explore the background of Bitch Planeteer Meiko Maki, drawn by guest penciller Taki Soma. Also, the single issues of Bitch Planet have had some utterly amazing essays on feminism, letters from readers, etc., in the back matter that, for whatever reason, are not reprinted in the trades. This is one of the few series where if you aren’t reading the single issues (either digital or print), you’re missing part of what makes it so amazing. (Note: this issue came out last week, so you can actually buy it right now!)

After Eisner-nominated cartoonist Tom Hart’s daughter Rosalie died in 2011, shortly before her second birthday, he started work on a memoir about her life, death, and how he and his wife (fellow cartoonist Leela Corman) dealt with their grief. I have only read the first few preview pages, but that was enough to make me tear up. I’m not 100% sure I can make it through the book, but Rosalie Lightning looks like it might be indispensable if you or someone you know has lost someone close to you.

In her first-ever series, Dr. Pamela Isley a/k/a Poison Ivy, tries to go straight with a job at the Gotham Botanical Gardens, but comes under suspicion when a fellow scientist turns up dead. This is writer Amy Chu’s first miniseries for a major publisher, but her work in Sensation Comics and the Vertigo CMYK and Strange Sports Stories anthologies has been well-received and she was profiled as part of Comic Alliance’s “Hire This Woman” series a couple of years ago. Fingers crossed that this turns out to be her big break. I might even break my informal rule against buying DC floppies for this one.

Of course I’m getting this. I mean, it’s Carol-freaking-Danvers. I mean, just last month I wrote a piece telling you what to read to get ready for this book. I’m maybe slightly just a tad bit obsessed.

But let’s assume for a moment that you aren’t obsessed like me, that your response to the words “Carol Corps” is “More like Carol BORE!” Well, I’ve got two words for you: Agent Carter. Remember that kickass series we were all obsessed with last January (and will be again this January) starring Hayley Atwell? Well, the showrunners from Agent Carter, Michele Fazekas and Tara Butters, are taking over the writing on Captain Marvel. Did you just get a tingling sensation down your spine? Plus, check out that fantastic art by Kris Anka.

I’m often skeptical of books and movies about “the sterile sameness of the suburbs” (mostly because the theme has been explored so many times that it’s hard to say something interesting), but Nick Drnaso’s Beverly looks promising, with an art style evocative of Chris Ware (who praised the book over at D&Q’s website) and a cast of disaffected teens that might have come out of the mind of Daniel Clowes. The graphic novel is written as a series of interconnected short stories, promising additional insights on a reread.