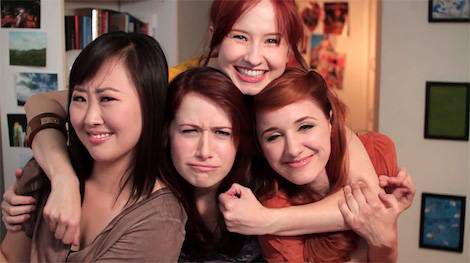 It all started with Pride and Prejudice (doesn’t it always?). In 2012, web creators Bernie Su and Hank Green teamed up to launch the YouTube adaptation known as The Lizzie Bennet Diaries. I just so happened to be taking a Jane Austen class around that time, and ended up following the series from start to the 100th episode finish.

There were YouTube adaptations of classics before The Lizzie Bennet Diaries, I’m sure, and there have been a few that came after. But LBD was the big one. It had high production quality, a diverse cast of actors, and snappy one-liners — all while keeping to the storyline of the much beloved Pride and Prejudice.

Since then, I’ve been keeping up a steady diet of YouTube adaptations. It feeds my tiny, caffeine-fueled English major heart. Plus, there isn’t the pressure and effort that comes with buckling down to read an actual classic novel. (I admit, I was a lazy English major.)

1. The Lizzie Bennet Diaries, based on Pride and Prejudice by Jane Austen

2. Emma Approved, based on Emma by Jane Austen

3. Carmilla, based on Carmilla by J. Sheridan Le Fanu

4. Nothing Much To Do, based on the Shakespeare play Much Ado About Nothing