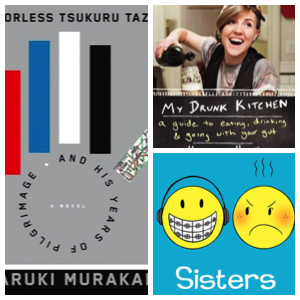 There are so many big releases hitting Book Land this month that it was hard to whittle this list down to five. For your diverse reading pleasure, I tried to hit every genre I could, from fantasy to (kind of) cookbook to graphic novel to essays. Let’s hit it!

The Magician’s Land, with its haunting, foggy-yet-crisp cover, is the third and final installment of Grossman’s much beloved Magicians trilogy. And Rebecca Schinsky says it’s the best one yet! Trust Rebecca Schinsky! I obvs can’t give many details being that it’s the conclusion of a trilogy BUT if you like love letters to fantasy, you should start this trilogy now. And read all of it by August 5th. YOU CAN DO IT.

I know it’s probably not very scholarly to do this, but I am just gonna go ahead and give this book five stars based on the title alone. FIVE STARS.

In reviews for this book, the word “provocative” is used approximately a million times. Which, of course, is code for: “Smart woman of color tells shit like it is; people may wring their hands a lot.” From Sweet Valley High to Orange is the New Black, Gay examines culture and politics in a way that tells a deeply personal story while also calling on all of us to do better. I am awfully glad she exists.

Colorless Tsukuru Tazaki is being heralded as a Murakami tale that’s “short and straightforward” in comparison with his more recent meandering works. It should be said that it’s still 400 pages, though, which I guess you only consider short when you’re comparing it to the 946 of 1Q84. Tsukuru Tazaki is a lonely man in his mid-30s who is “haunted by a great loss,” and his pilgrimage involves “traveling into the past to help heal his present.” And, yeah, that’s all you really get in terms of description. It also sold over a million copies during its first week of publication in Japan. Holy cheeseballs.

My Drunk Kitchen: A Guide to Eating, Drinking, and Going With Your Gut, Hannah Hart (Dey Street Books – August 12th)

Personally, I miss the old school, actually drunk, tiny NYC kitchen Hannah, as opposed to the new, shiny, always-looks-like-a-movie-star-even-when-she’s-trying-to-be-sloppy LA Hannah. YouTuber success problems, amIrite? But, I mean, do I still like her face? Yes. Would I still read her book? Hell yes. Would I read it more for pun-filled talk about life and alcohol than for the recipes? Well duh.

Sisters is the companion to 2010’s Eisner Award-winning Smile, and if you don’t know how big Smile was/is, well, then, you probably don’t work with children. But trust me that it was/is BIG. Like, changing the face of graphic novels for children big. Like, I am going to write a whole separate post about Raina Telgemeier when August 26th comes closer. Seriously. BIG.

Like Smile, Sisters is autobiographical in nature, this time focusing on the not-always-chummy bond between a young Raina and her sister Amara, a bond that begins to strengthen with the arrival of a new baby brother and the rumblings of discord between their parents. Told in flashbacks, much of the action takes place during a road trip from San Francisco to Colorado. ROAD TRIP! Sounds like a perfect way to end the summer to me.

What other August releases are you looking forward to?