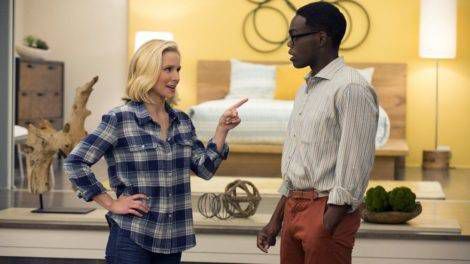 This post contains major TV plot spoilers. If you haven’t watched all of season one, go get a bowl of ice cream, watch, and enjoy. Then come back and see me.

When my son wouldn’t sleep in the middle of the night, I learned that the only thing on from 4-6am is infomercials. This is how I wandered over to my streaming options, and it’s how I found the NBC show The Good Place. I binged the episodes, and when I finished the finale, my jaw dropped. That show went from delightful to mind-bending. And I needed more. How was I going to wait until September? How I always do – with books! So here’s my list of 5 books to get you ready for season two of  The Good Place.

Eleanor Shellstrop has died and finds herself in The Good Place, a neighborhood of the very best deceased people. Led by their neighborhood’s architect, Michael, people are paired off into soul mates, and the days are filled with frozen yogurt, flying, and generally enjoying the fruits of a life spent doing good. 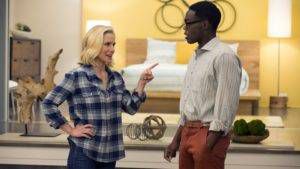 Except Eleanor didn’t do good. She did bad. And there has been a mistake. Her soul mate Chidi, a former philosophy professor, endeavors to help her correct her bad life in order to escape detection that she does not belong in The Good Place. But she’s not the only mistaken misfit:  Jianyu, or Jason Mendoza, is also in the wrong place, and his soul mate, Tahani, has to keep his secret, too.

Real Eleanor shows up from Fake Eleanor’s spot in The Bad Place; Eleanor admits she’s not supposed to be there; Jason falls in love with Janet, the AI concierge of The Good Place. And by the time we get to the truth in the finale, that this is The Bad Place, and Eleanor, Chidi, Jason, and Tahani have all been pre-selected to torture each other – well, we are dealing with quite a different show than we thought! So with all that in mind, let’s get to the recommendations.

Jean-Paul Sartre’s No Exit. Obvious? Yes. But still apt. Sartre’s play about three people waiting in Hell’s drawing room, unable to leave, could be considered a foundational text for The Good Place. The final line, “Hell is other people,” solidifies the premise of Michael’s plan for the four main characters in The Good Place to torture one another. So if you care to go back to an early example of this plot structure, check out No Exit. 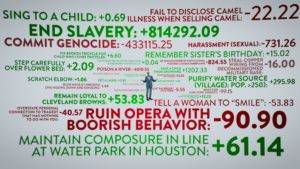 I’m Judging You:  The Do-Better Manual by Luvvie Ajayi. Gaining admission to The Good Place requires above-average living on Earth, and Michael has designed a point system in which every action you commit – from using the phrase “bro code” to singing to a baby – carries a point value, positive or negative. And if you want to read some seriously funny sass about the everyday minutia that makes us all a little terrible from time to time, you need to read I’m Judging You. Luvvie Ajayi includes herself in her indictments of racism, homophobia, dramatic social media presence, and people who suck at friendship. 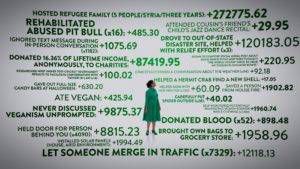 Gone Girl by Gillian Flynn. When we learn in the season finale that Michael has designed a special Bad Place intent on torturing the four main characters for thousands of years, we realize that he’s not the doddering, sweet, bespectacled man who gets excited about trying suspenders for the first time. We find out he is a mastermind. A sadistic one. And when I think of masterminds, and I think of torturing people without ever laying a hand on them, I think of Amy from Gone Girl. That is next-level planning. And it occurs to me that Michael could learn a lot by reading that book before season two as well.

Ready Player One by Ernest Cline. Speaking of designing a whole world, we need to mention Ready Player One. In the year 2044, reality has fallen to pieces and teenager Wade Watts finds solace in the virtual reality world OASIS, full of puzzles and pop culture throwbacks. Wade must find clues to unlock the puzzles if he is to inherit the designer’s fortune, but it won’t be easy because everybody else wants that fortune too, and they’ll kill to get it.