Running can be scary. When I started, I was hovering at Fitness Level Zero, and the idea of pounding the pavement gave me the gurgles. Somehow the twitchy, fidgety feeling in the back of my mind didn’t let go until I gave in and tried it for myself and that is how the rubber hit the road.

I fell hard and fast for running…not only the physical benefits but the mental quiet I’ve gained, and the endorphin rush doesn’t hurt either. As with most readers, when I fall down the rabbit hole of a new interest the books aren’t far behind. These are some favorites, some necessities, and at least one I’m itching to get my hands on. 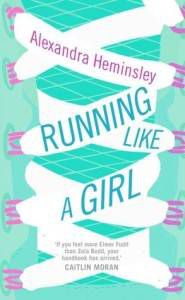 Running Like a Girl: Notes on Learning to Run by Alexandra Heminsley is the most approachable book in this list. Heminsley committed to a marathon far earlier in her running life than is advisable. It didn’t take long for her to realize her mistake, but since she had already decided to raise funds for charity, she had to follow through.

This was the first running book I picked up, and I literally bawled, full-on ugly cried, when Heminsley tackled that marathon. It was the first hint I had at how emotional it can be to conquer physical hurdles. Unassuming and charming, this is what I imagine it’s like for every woman (Everywoman) without a solid athletic history who decides to take up the sport. 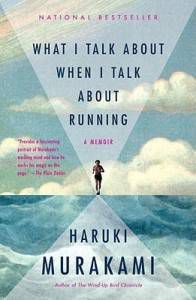 What I Talk About When I Talk About Running by Haruki Murakami is probably most interesting to the readerly set because this esteemed author jumps headlong into the running and writing parts of his life. A collection of essays and memories, the author examines his mutual obsessions and wraps in his early journalist work, his first marathon, and other noteworthy milestones. 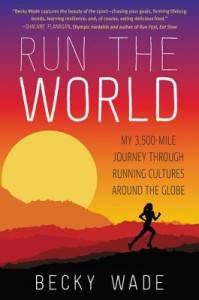 Run the World: My 3,500 Mile Journey Through Running Cultures Around the Globe by Becky Wade is an eye-opener. It is far too easy to oversimplify running and running culture down to “put one foot in front of the other.” Approaches to running and communities of runners differ wildly around the world. Wade, an elite athlete and fellowship recipient, traveled for a year after her graduation from Rice University to experience running life in 9 countries, with 72 host families, and she logged over 3,500 miles of her own running. For newbies or seasoned athletes, this book is a thrill. Even as a rookie, I was able to incorporate some new tactics into my own training, and I learned about notable athletes from all over the world, some of whom will soon compete in the Rio Olympics. 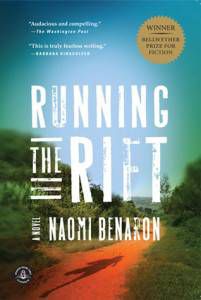 Running the Rift by Naomi Benaron is for those with an appetite for novels. The winner of the Bellwether Prize for Socially Engaged Fiction, this is not always a feel-good book. It is powerful, brutal, and contemplative. Jean Patrick Nkuba loves racing his brother from the time they are children, and as he grows up he begins to realize his Olympic dream in track and field. A number of hardships bar his way, from the death of his father to the growing unrest between the Hutu and Tutsi peoples of Rwanda. Jean Patrick’s fate hangs in the balance as the genocide plays out before his eyes sweeping him into an uncertain future. 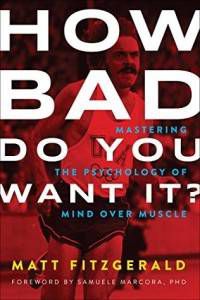 How Bad Do You Want It: Mastering the Psychology of Mind Over Muscle by Matt Fitzgerald is at the tippy-top of my wishlist. Fitzgerald is a seasoned endurance sports journalist who has authored more than 20 books. In How Bad Do You Want It he examines more than 20 pivotal races in a variety of sports (running, cycling, triathalon, etc.) and the key role of “mental fitness” in athletic success. In my own limited running experience, I’ve found the mental struggle to be the most enduring problem, so perhaps this book can help along the way.