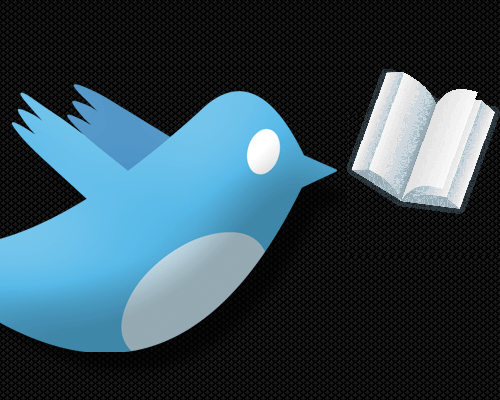 Twitter has some authorial superstars- writers who have amassed giant followings through sheer power of their awesome-sauce. Neil Gaiman (@neilhimself) has over 1.7 million followers, Margaret Atwood (@MargaretAtwood) comes in at an impressive 345k+ followers, and Salman Rushdie’s (@SalmanRushdie) following tops out at over 400k. In the spirit of a sort of hipsterish “I liked them before they were literary Lady Gagas,” here are a few authors on Twitter who have less than 100,000 followers, and whom you should begin following TOUT DE SUITE.

@ANNELAMOTT. The author of Traveling Mercies: Thoughts on Faith and the memoirish writing guide Bird By Bird: Some Instructions on Writing and Life has just over 28,000 followers despite having written several best-sellers. She tweets hilarious observations about God, the writing process, and her Very Left-Leaning Politics.

Sample tweet: “Writer friend Dennis told me, Never use a character named Brian, b/c you’ll mistype as “brain” and spell-check will let it through.”

@tejucole. Teju Cole is the author of Open City, the winner of the 2012 PEN/Hemingway Award. His Twitter account chronicles what he calls “small fates,” poignant micro-stories he describes as “an event, usually of a grim nature, animated sometimes, but not always, by a certain irony.” Even better- they’re true stories.

Sample tweet: “In Wilkes-Barre, Stanley irked by Luskasckin’s clever remark, thrust a billiard cue through his eye into his brain. Game over.”

@lostcheerio. Lydia Netzer wrote Shine Shine Shine, which currently holds the record for Book I’ve Hand-sold More Than Any Other Book (Have you not read this yet? It has robots and space travel and suburban-marriages-gone-awry and it is amazing, so.) She’s currently racing around the world doing Various Stuff And Things for her book (and also working on her next book), so if you’ve ever wanted to watch a super-witty lady do a book tour AND write a novel, now’s your chance.

Sample tweet: “I want to meet you at Mysterious Galaxy Bookstore in San Diego on Saturday at 11:30. Bring a friend, bring your robot, and let’s do this.”

@emmastraub, author of the short story collectionOther People We Married and the fresh-off-the-presses novel Laura Lamont’s Life In Pictures. Follow her because someone once sort-of-kind-of blamed her for the online literary community being “too nice,” and don’t you want to see what all the fuss is about? Also, she makes brownies and is a bookseller- WINNING. Basically, follow her if you’re into watching a literary star rise. WHICH YOU ARE, I CAN TELL.

Sample tweet: “Boarding flight to Seattle. Please tell me where to eat and buy vintage dresses when I arrive.”

@byseanferrell, author of coming-in-February-2013-time-travelly-book-of-time-travel Man in the Empty Suit, has the driest of dry wits. Desert dry. This is my favorite kind of humor, and I like to project my tastes onto the whole of the Internet. Go forth and laugh! Or, you know, snicker appreciatively.

Sample tweet: “I think if Arthur Schopenhauer were alive today he’d agree that Hulu Plus just isn’t worth the dollars.”