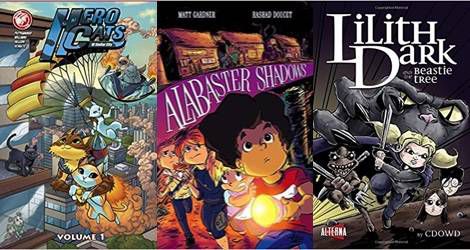 This is a guest post from Jess Carbert. Jess is a freelance journalist with training in the mystic arts of print, television, radio, and a dash of PR. When she’s not mowing people down in her wheelchair, she’s writing like her life depends on it, or getting willfully lost in a book. Follow her on Twitter @heyits_wheels.

The misconception that comics are written for grouchy, asthmatic men who preach the gospel of “same old, same old,” while firmly snubbing anything new, is probably one of the most egregious assumptions you can make. Comics are a great medium to be enjoyed by all ages and genders. While the violence, cursing, and sometimes sexually-explicit scenes may make you think twice about the former, the fact is that there are tons of comics out there for kids to love. I know from experience that sometimes, a comic book will do what a traditional novel cannot: encourage reluctant readers. When they’ve tried (what seems like) a hundred different books with no incentive to keep going unless it’s mandatory for school, introducing them to comics can make them eager to keep reading, to invest themselves, to get to the end and pick up another book. That’s not to say that traditional novels must be dismissed, not at all, but one of the best aspects of literature is the sense of community provided when it finally clicks, and you’re drawn to the heart of a story, to the ebb and flow of the words.

Watching someone fall in love with reading is almost as rewarding as reading itself, and so whether they fall in love with quotation marks or speech bubbles, that love will stick, and soon they will try other things. Afraid to check out your LCS? Don’t be! Doing your research on all-ages comics can be a great experience— for you and the younger readers in your life. The sooner you take your kid to the comic book store, the sooner they’ll figure out if maybe— just maybe— they’ve ignited a new interest, and found a place where they belong. If you don’t have a comic book store in your area, you can always order your comics at a regular bookstore or online. The reading selection is vast and varied, so I’ve narrowed it down to 5 all-ages books that everyone in your household can enjoy. In the interest of fairness, I left out Noelle Stevenson’s Lumberjanes, because everyone and their grandmother is a fan of Lumberjanes. If you haven’t heard of Lumberjanes, please go read it immediately. 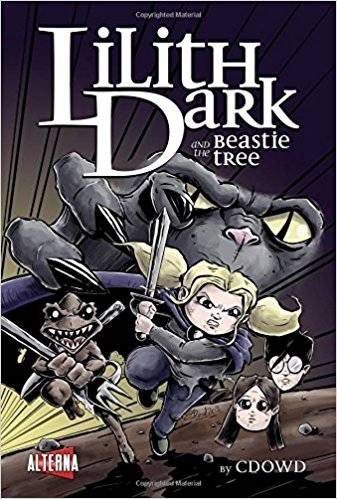 An all-ages adventure that’s more in line with Coraline or Where The Wild Things Are, Lilith Dark & The Beastie Tree follows precocious, imaginative Lilith, the youngest of the Dark siblings. This little terror is too busy battling Beasties and wrangling unicorns to behave— or at least, that’s what she imagines she’s doing. When an adorable kitten lures Lilith to the Beastie Tree, she discovers a world full of monsters, scarier than even she’d imagined! Lilith wastes no time in electing herself Queen of the Beasties and announces a feast to celebrate the start of her reign… but as a main course, the Beasties bring in Lilith’s big sister! In order to save Becky, Lilith and her brother Dewey team up with a rogue Beastie named Spoon, a dinosaur, and the family dog, Kitty. Lilith Dark & The Beastie Tree is a dark— but not too dark— tale with a brash, bold main character who will do whatever it takes to save her family. For someone so small, Lilith clearly packs a punch, and the line between fantasy and reality wobbles into nonexistence in this page-turner. Alterna is also almost through with publishing another 3-issue Lilith adventure as part of their brand new newsprint line. 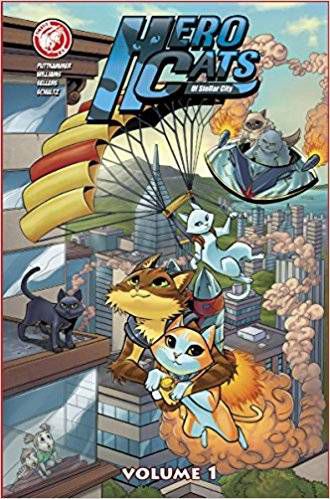 I’ll admit: I’m probably biased when it comes to this series because of my attachment to Erin Hunter’s Warriors series— but seriously, who doesn’t love to read about a group of crime-fighting cats? Cassiopeia, Ace, Belle, Midnight, Rocket, and Rocco are the furry protectors of Stellar City— they each have special gifts, which they use to defend their home from glowing monsters and untrustworthy superheroes alike. Despite the fact that they look super-squishable and extra-cuddly— these kitties have claws, and they’re not afraid to use them, especially when it comes to working out the kinks in team dynamics. While the younger end of the spectrum will probably enjoy Hero Cats more than older readers, that doesn’t mean it’s not a worthy read. There’s also a companion series, Hero Cats: Midnight Over Stellar City, availible to sink your teeth into. 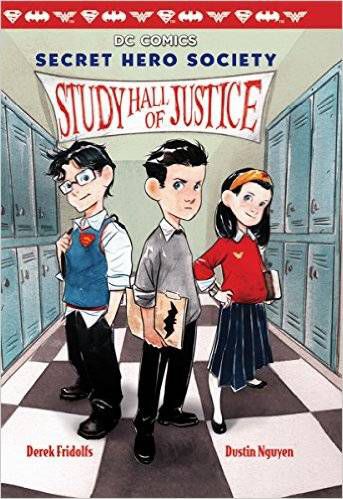 Ever wonder what would happen if DC’s trinity went to the same fancy-pants, privatized middle school? The creative team behind the gorgeous all-ages fun-fest that is Li’l Gotham have made those ponderings a reality! Bruce Wayne has been accepted as a student at Ducard Academy. He’s the “new kid,” on campus after years of homeschooling, but right away, Bruce knows his new school is weird in all the wrong ways. A pack of badly-behaved clowns roam the hallways, the choir teacher’s voice can shatter windows, and Ducard’s automated operating system, Brainiac, is prone to schemes of world-domination and vowing vengeance over routine maintenance checks. While Study Hall Of Justice is told in the style of a typical comic, the graphic novel also utilizes school notes, I.M. chats, journal entries, and other visual delights to tell the story. Study Hall Of Justice is distinctly child-friendly, but there are plenty of Easter eggs for older DC Comics fans to enjoy within its pages. Derek Fridolfs and Dustin Nguyen have truly exceeded in making something fun for everyone, and the art, rendered in black and white, is utterly phenomenal. Once you finish, you’ll want to pick up the sequel, Fort Solitude. If those books are a hit with you, check out L’il Gotham. Aimed at younger readers, it’s a great starting point! 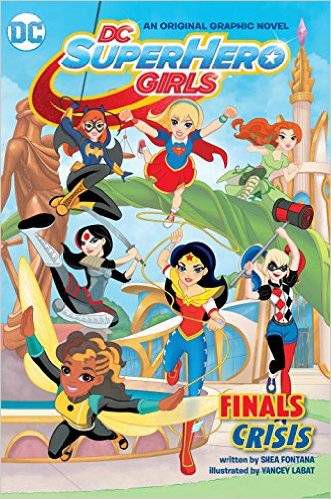 Pretty much everybody knows about the DC Superhero Girls brand thanks to their line of toys and short, YouTube-hosted websidoes. But they also have a New York Times best-selling series of graphic novels to their name, one focused exclusively on the kick-butt girl heroes that attend Superhero High. Written well but simply, with clean art and bright colours, DC Superhero Girls: Finals Crisis is the graphic novel that started it all. Now, I know what you’re thinking: this is DC Superhero Girls, it’s not meant to be read by boys. But why not? Why is it “cutesy” (in a totally demeaning way) if girls read books that are traditionally thought of for males, but when a boy picks up something like DC Superhero Girls (I’ve seen it happen), he’s gently redirected or stringently scolded until he picks up another book? The thing about DC Superhero Girls is that it can be enjoyed by anyone: a hero is a hero, no matter their gender, and readers should be able to dive, headfirst, into something that interests them without labelling something strictly as “for girls,” or “for boys.” DC Superhero Girls: Finals Crisis introduces readers to a cast of kick-butt characters— Wonder Woman, Supergirl, Bumblebee, Katana, Batgirl, Poison Ivy and Harley Quinn. Characters like Beast Boy, Steve Trevor, and The Flash drop by too— as they prepare to take their end-of-semester-exams. But one by one, the girls are kidnapped by someone who doesn’t want them to take their finals, and will do anything to make sure they don’t. Honestly, Superhero Girls is such a fun, easy-to-get-into romp with a plethora of Easter eggs to keep older fans entertained just as avidly as the younger ones. It’s not hard to see why people are raving about it. It’s action-packed, but it also emphasises academic achievement, friendship, and how to deal with bullying— and that’s only in the first book. The sequel, Hits And Myths, is already out, while the third, fourth, and fifth are available for preorder. 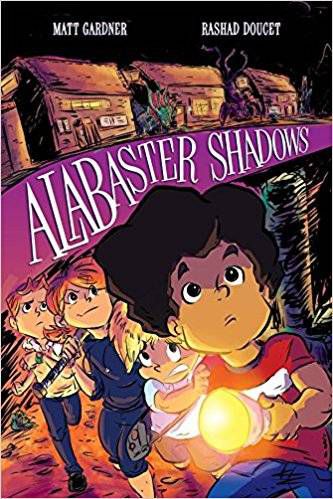 If you think you have a future horror junkie on your hands, Alabaster Shadows is the perfect all-ages gift! With just the right amount of spooky, a double dose of fun, and a group of smart, inquisitive kid protagonists, Alabaster Shadows will grab readers hook, line, and sinker. Carter Normandy isn’t exactly thrilled about the family’s move to the cookie-cutter subdivision that is Alabaster Shadows, a neighbourhood run by the child-hating Miss Crowe, and the Community Council. Even though Alabaster Shadows looks like something out of a glossy home magazine, something about it feels squicky. There’s a weird leak in the basement that leads to somewhere unearthly, Carter’s new friend Dudley has talking monsters under the bed, and his parents have been acting like pod-people! Gorgeous and packed full of issues big and small— whether they’re combating monsters, or dealing with adults who simply won’t listen because they’re “just kids,”— Alabaster Shadows offers a great first dance with the horror genre. It also reminds people that even— especially— the youngest voices deserve to be heard.