This Riot Recommendation for favorite memoirs is sponsored by Random House, publisher of Tara Westover’s Educated. 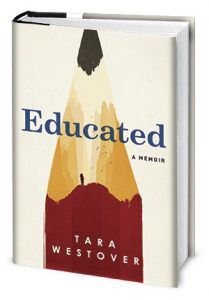 Tara Westover was seventeen when she first entered a classroom. Her stunning debut, in the tradition of The Glass Castle, recounts the quest for self-invention that took her from an unschooled childhood with Western survivalists to the halls of Harvard and Cambridge. Educated is the must-read book of 2018, a memoir hailed by Amy Chua, the author of Political Tribes and Battle Hymn of the Tiger Mother, as “breathtaking, heart-wrenching, and inspirational” and by J. D. Vance, the author of Hillbilly Elegy, as a “powerful tale” that “deserves to be widely read.”

I so admire a good memoir. First of all, the author has to have had an interesting experience or two, else they wouldn’t have memoir material. But they also must possess a talent for shaping that experience into a meaningful story, told in captivating prose. We asked you to think back to the last time you finished a memoir that you just had to tell everyone about, and tell us in the comments. Here’s just a smattering of the titles you submitted!

An American Family: A Memoir of Hope and Sacrifice by Khizr Khan

Out of Africa by Isak Dinesen

The Color of Water: A Black Man’s Tribute to His White Mother by James McBride

She’s Not There: A Life in Two Genders by Jennifer Finney Boylan

Orange Is the New Black: My Year in a Women’s Prison by Piper Kerman

Mental: Lithium, Love, and Losing My Mind by Jaime Lowe

Dust Tracks on a Road by Zora Neale Hurston

Reading Lolita in Tehran: A Memoir in Books by Azar Nafisi

Born Standing Up by Steve Martin

Paper Lion: Confession of a Last-String Quarterback by George Plimpton

A Heartbreaking Work of Staggering Genius by Dave Eggers

Life Itself by Roger Ebert

On Writing: A Memoir of the Craft by Stephen King

The Men We Reaped by Jesmyn Ward

Let’s Take the Long Way Home: A Memoir of Friendship by Gail Caldwell

An Astronaut’s Guide to Life on Earth by Col. Chris Hadfield

Smoke Gets in Your Eyes: And Other Lessons from the Crematory by Caitlin Doughty

The Liar’s Club by Mary Karr

Hiroshima in the Morning by Rahna Reiko Rizzuto

Love, Loss and What We Ate by Padma Lakshmi