This Riot Recommendation is sponsored by All the Women in My Family Sing: Women Write the World: Essays on Equality, Justice, and Freedom edited by Deborah Santana. 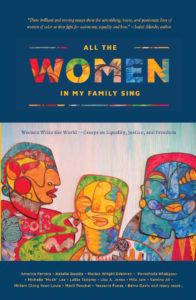 All the Women in My Family Sing is a vital collection of prose and poetry by women of color, with topics that range from the pressures of being the vice-president of a Fortune 500 Company, to escaping the killing fields of Cambodia, to the struggles inside immigration, identity, romance and self-worth. The brief, trenchant essays capture the aspirations and wisdom of these powerful women as they exercise autonomy, creativity, and dignity and build bridges to heal the brokenness in today’s turbulent world.

Women have produced some edifying and entertaining nonfiction—from philosophy to history to essays and everything in between. We wanted to know: what are your favorite works of nonfiction by women? And wow, did you tell us! Below you’ll find more than forty recommendations from your fellow Riot readers.

All the Single Ladies by Rebecca Traister

Holding the Line by Barbara Kingsolver

The Woman Who Would Be King: Hatshepsut’s Rise to Power in Ancient Egypt by Kara Cooney

A Room of One’s Own by Virginia Woolf

Payback: Debt and the Shadow Side of Wealth by Margaret Atwood

Unmentionable: The Victorian Lady’s Guide to Sex, Marriage, and Manners by Therese Oneill

The Spirit Catches You and You Fall Down by Anne Fadiman

Illness as Metaphor by Susan Sontag

Thinking in Pictures by Temple Grandin

The House on Beartown Road by Elizabeth Cohen

Thru Hiking Will Break Your Heart by Carrot Quinn

Against Our Will by Susan Brownmiller

Get Well Soon: History’s Worst Plagues and the Heroes Who Fought Them by Jennifer Wright

Brain on Fire by Susanna Cahalan

Don’t Look Back, We’re Not Going That Way by Marcia Wallace

The Female Eunuch by Germaine Greer