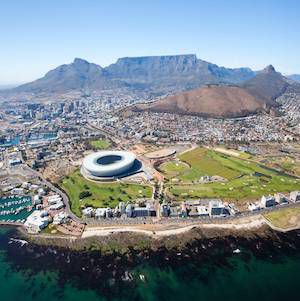 This is a guest post from Charlie Human. Charlie is a novelist and screenwriter from Cape Town, South Africa. His novels Apocalypse Now Now and Kill Baxter have been published in six countries, including the US, UK and Japan. His screenplay, Wasteland, has recently received development funding from the NFVF and he was chosen as one of the Mail and Guardian’s 200 Young South Africans for 2014. Follow him on Twitter @charliehuman.

My answer? I don’t know. The strange, the bizarre and the fantastical have always been here but perhaps we haven’t always given them the respect they deserve. We have such rich ground to explore and I’m glad that people are taking our weird heritage and turning it into even weirder stories.

Most people wouldn’t consider Zakes Mda a spec-fic writer at all. But I start with him because his Ways of Dying, about a professional funeral mourner, was one of the first books that took me away from my regular fare of straightforward sci-fi and showed me that a book could be a lot of things; funny, profound and moving, all rolled up into a single story.

But it was really his Heart of Redness that got me thinking about how the branching, intertwined roots of South African history and mythology are so deep and rich that they deserve to be written about.

In the book he tells the story of the Xhosa diviner and prophetess, Nongqawuse, who convinced her own people to kill all their cattle, prompted by a vision that told her that her ancestors would then drive the British into the sea.

Her story is one of hundreds of places within the Southern African cultural landscape where imagination and reality converge into a strangely compelling historical narrative.

The story of Nongqawuse inspired me to look into some of my cultural heritage when writing Apocalypse Now Now, bringing me to include the story of the Afrikaner Siener Niklaas van Rensburg, a clairvoyant who was part of a Boer commando that fought against the British (apparently a common theme among South African mystics).

When I first read Lauren’s first book Moxyland I had that feeling that writers experience when they read something brilliant; a strange mix of awe and envy. Why didn’t I write that? How can I be that good? That feeling has only intensified with every subsequent book she’s written. Damn her.

The places she writes about are always major characters in her books: Joburg in Zoo City, Chicago in The Shining Girls, and Detroit in Broken Monsters, but it’s the details that really hook you. Every little piece of information that she hits you with has a story behind it that has been painstakingly researched and meticulously placed. I can’t even talk about her dialogue because it’s so razor-sharp it hurts.

My advice would be to start with Moxyland and then work your way through her books in order.

I was lucky enough to have Lauren supervise my MA in Creative Writing. This is the kind of comment I’d get on the manuscript that eventually became Apocalypse Now Now. (Yes, in fact I did mean giant motherfucking Urotsukidoji tentacles.) 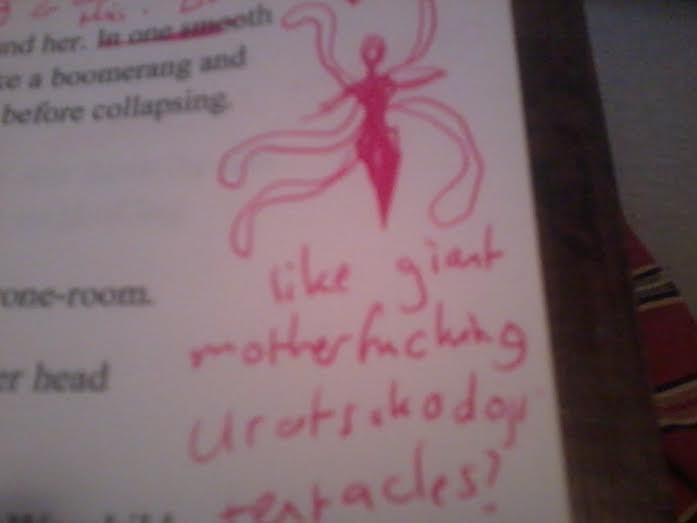 The first book of Sarah’s I read was Pompidou Posse, a semi-autobiographical story about two teenage girls who go on the run in Paris and end up living on the street. When I read it I immediately saw her as a kindred spirit, someone who had taken the rough path through their teenage years and then ended up in the writing life because of it (or maybe despite of it).

Sarah is one of those rare breed of truly prolific writers, switching genre at will and nailing them all. The Mall series (in partnership as S.L Grey) is horror at its finest. She switches to partner up as Lily Herne for the Deadlands zombie series and then as if to prove she can pretty much do anything, writes choose-your-adventure erotica as Helena S. Paige.

But for me it’s her solo work that really shines. The Three, about three aeroplanes that crash independently at the same time, is as weird, dark and creepy as it comes, and is highly recommended.

Henrietta Rose-Innes is an incredible writer. Not that someone who has won the Caine Prize really needs me to sing her praises, but it’s true. Here’s somebody who has complete control of her style, but strangely doesn’t often get included in lists of South African spec-fic writers.

Maybe it’s because she comes at spec-fic from a literary angle, or maybe it’s just because she’s so good that she reaches people who don’t usually read genre. I don’t know. Just read her.

“Poison,” the story that won her the 2008 Caine Prize, is one of my favourite short stories ever (you can read it here). I haven’t yet read her latest, Green Lion, but I can pretty much guarantee it’s amazing.