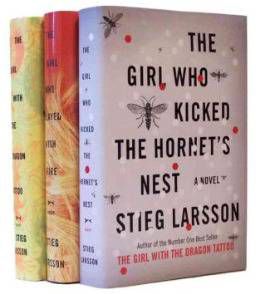 A few weeks ago, an enterprising Cambridge, Mass. native named Ryan North threw up a Kickstarter to fund a project to rewrite Hamlet as a Choose Your Own Adventure story. His goal was to raise $20,000. He’s at about $250,000 now. Wow!

So what did we learn? People still love the Choose Your Own Adventure books, apparently. Ah, memories of childhood… I can tell you I, for one, spent hours with those in the mid-80s, and loved every second of them.

And but, this got us thinking about novels that would work well in the Choose Your Own Adventure format. Here’s a few that came immediately to mind:

Gone Girl, by Gillian Flynn —This could be a LOT of fun — you could do a multi-tiered CYOA, continuing Flynn’s narrative structure of alternating between the characters, but choosing the adventure of each character. This would be especially fun as you continue to read, and continue to learn more about each character — those details would certainly influence your decisions. You’d probably have more paths to your untimely demise in this story than you would in most CYOAs.

The Millennium Trilogy, by Stieg Larsson — I actually wrote about this after I finished the trilogy; that the whole series kind of felt like a Choose Your Own Adventure tale anyway — like Larsson would get to a certain point in the plot, and then write out a number of possible directions the plot could go. And then he’d throw a dart, and that’s the way plot went — and it was often unexpected, and against any reasonable logic. I mean, after getting shot at, Mikael should a) Retreat to Stockholm to finish his research in safety. b) Report the incident to the police and give up on the project. c) Install some security equipment at his remote cabin, continue the project, and hope no one tries to kill him anymore.

Any John Irving novel — In many of Irving’s novels, weird crap randomly happens, and you don’t know why or what it’ll mean for later. As one example, in Last Night In Twisted River, a naked woman skydiver suddenly falls out of the sky and lands in a bunch of pig poop — do you a) engage her in conversation, b) scratch your head, and continue about your day, or c) run screaming through the woods because you’re terrified of her? Truthfully, each of these is a plausible reaction for the main character, isn’t it? Besides, even as you’re reading the book, you have no idea how the naked skydiver connects to the rest of the story right away — you just have to trust that it does. But that makes CYOAing really tough — but really fun! (Another Irving CYOA example, from A Widow For One Year: You’re a teenaged writer’s apprentice, and you’ve been caught sleeping with your boss’s wife. Do you a) pretend like nothing happened, hoping he’s cool with it; b) leave; c) drop him off at his mistress’s house, and even though he tells you to wait, scram out of there and leave him to face the music for the same crime you just committed…..I love Irving.)

Any in Daniel Silva’s Gabriel Allon series or Vince Flynn’s Mitch Rapp series — Silva’s international thrillers feature an Israeli art restorer who solves mysteries. These books are entertaining, but often a bit too linear for my taste. They would benefit greatly from more reader input. For instance, Gabriel Allon has arrived at a mansion in the Alps to restore a painting — and finds the owner murdered in his foyer. Should he a) Call the police immediately, b) Attempt to escape, incriminating himself, and forcing himself to go on the lam, or c) Continue with the restoration, because, I mean, the dude loves his work. Flynn’s CIA thrillers are similar — entertaining but mindless thrillers. These feature CIA agent extraordinaire Mitch Rapp who always finds himself in the thick of tricky situations. Example: The White House been taken over by terrorists who are threatening to blow it up with the hostages inside. Should Mitch a) Sneak in through a secret tunnel, and unleash hell, b) Go in through the front door, and unleash hell, c) Go through procedure, unleashing hell on his idiot bosses who won’t let him operate as we wants to.

This is another list that could extend into the hundreds — it sure is fun to think about! What would be on your list — which novels do you think would benefit from a Choose Your Own Adventure format?