This Riot Recommendation is sponsored by My Best Friend’s Exorcism by Grady Hendrix, from Quirk Books. 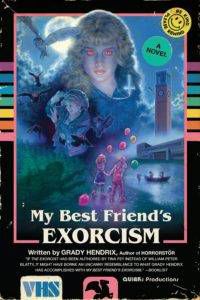 The year is 1988. High school sophomores Abby and Gretchen have been best friends since fourth grade. But after an evening of skinny-dipping goes disastrously wrong, Gretchen begins to act…different. She’s moody. She’s irritable. And bizarre incidents keep happening whenever she’s nearby. Abby’s investigation leads her to some startling discoveries—and by the time their story reaches its terrifying conclusion, the fate of Abby and Gretchen will be determined by a single question: Is their friendship powerful enough to beat the devil? Like an unholy hybrid of Beaches and The Exorcist, My Best Friend’s Exorcism blends teen angst, adolescent drama, and unspeakable horrors into a pulse-pounding supernatural thriller.

From books to B-movies, horror has proven itself a particularly fun genre to mess with, and when you want more than just a fright it might be time to seek out the truly strange and unusual. Nothing keeps a genre fresh like the occasional oddity and everything is better in bizarro-vision.

We asked you to tell us your favorite unconventional horror novels and you responded. Here are more than 35 of your favorites!

The Cold One by Christopher Pike

The Thief of Always by Clive Barker

Pontypool Changes Everything by Tony Burgess

Child of Fire by Harry Connolly

The Lottery and Other Stories by Shirley Jackson

The Exorcist by Peter Blatty

Walk the Night by William Sloane

The Killing Kind by John Connolly

The Fall of the House Usher by Edgar Allan Poe

The Sandman by E. T. A. Hoffman

The Taste of a Man by Slaveka Drakulić