This giveaway is sponsored by The Summoner Series by Taran Matharu. 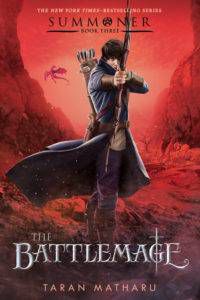 Fletcher can summon demons. But can he win a war? The action-packed bestselling Summoner Series continues with The Battlemage. Start reading from the beginning—get The Novice for only $2.99 for a limited time.

There’s something so satisfying (dare I say magical?) about discovering that book everyone needs to drop everything to read–the sleeper hit that begs to become a mega sensation.

We asked you to share your favorite under-the-radar YA Fantasy books, and you responded. Here are more than 30 of your favorites!

Finnikin of the Rock by Melina Marchetta

A Fistful of Sky by Nina Kiriki Hoffman

The Forbidden Game by L.J. Smith

The Gammage Cup by Carol Kendall

The Novice by Taran Matharu

The Farseer Trilogy by Robin Hobb

The Chronos Files by Rysa Walker

Insight (Web of Hearts and Souls) by Jamie Magee

The Ring and the Crown by Melissa de la Cruz

Chronicles of Nick by Sherrilyn Kenyon

The Wrath & the Dawn by Renee Ahdieh