This giveaway is sponsored by Chronicle Books. 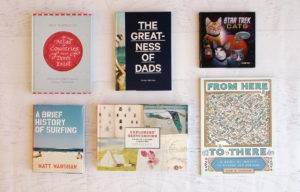 Dads are diverse. Celebrate all their quirks with just the right book this Father’s Day. With books about explorers, history, and geography (Explorers’ Sketchbooks and Atlas of Countries That Don’t Exist), an encyclopedic tome on surfing (A Brief History of Surfing), an intricately illustrated activity book (From Here to There: A Book of Mazes to Wander and Explore), a hilarious homage to the original Star Trek series with an unexpected twist (Star Trek Cats), and a handsome volume that celebrates all they do (The Greatness of Dads), Chronicle Books has you (and your dad) covered.

No two dads are the same but, chances are, there’s a book out there for every one. Maybe it’s fact, maybe fiction–we asked you to tell us what book you would recommend to your dad, and you responded.

The Walk by Richard Paul Evans

I Must Say by Martin Short

The Eight by Katherine Neville

The Lottery Rose by Irene Hunt

Anything by Candice Millard

Big Russ and Me by Tim Russert

A Deepness in the Sky by Vernor Vinge

Make Me by Lee Child

The Invisible Man by Ralph Ellison

The Fall by Guillermo Del Toro and Chuck Hogan