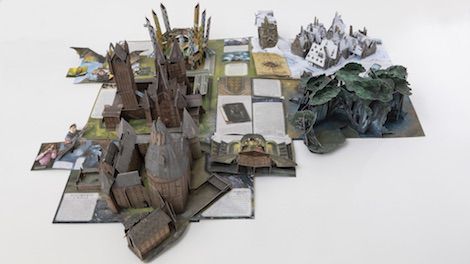 Sponsored by Nightblood by Elly Blake from Little, Brown Books for Young Readers.

This October, Muggles everywhere will be able to enter the wizarding world anew with three new Harry Potter books. And one of the new books apparating to stores this fall is a Hogwarts pop-up!

Okay, I will read the heck out of a Hogwarts pop-up book.

This week, Duke University Press is reissuing James Baldwin’s children’s book, Little Man, Little Man. If you had no idea that James Baldwin ever wrote a children’s book, you’re not alone. In fact, quite a number of established literary writers have dabbled in kids lit. Most people know about the children’s books of writers like Ian Fleming (Chitty Chitty Bang Bang), Salman Rushdie (Haroun and the Sea of Stories), T.S. Eliot (Old Possum’s Book of Practical Cats), Toni Morrison (The Book of Mean People, etc) and even Mark Twain (Advice to Little Girls). But others are more obscure, and in honor of the republication of James Baldwin’s only children’s book, here are a few of these, all of them children’s books (even if made into them after the fact) and all written by writers more famous for their grown-up fiction. Lots more can be found, by the way, at novelist Ariel S. Winter’s lovely but currently dormant blog We Too Were Children, Mr. Barrie. Check it out.

It’s Germany, however, that wins for the most creative title alteration. Its version of the film does away entirely with any mention of Guernsey, literature, letters, societies, or potato peel pies. Rather than humor that kind of whimsy, the film has simply been renamed Deine Juliet, or Your Juliet, which is how Lily James’ character signs off on her letters.

I love this look at the way Guernsey Literary And Potato Peel Pie Society’s title has been translated around the world.