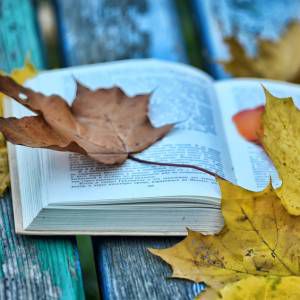 This giveaway is sponsored by Kobo. Kobo has over 4 million eBooks in dozens of categories – from bestsellers to indie breakouts, plus world-class eMagazines and over 100,000 kids’ titles. And with the freeKobo App, you can read right on your smartphone, tablet or computer – and switch between devices without losing your spot. Plus, purchases through Kobo can support your local independent bookstore.

In the spirit of upcoming holiday thankfulness (and general warm fuzzies), we asked you to name the book you’re most thankful for. We got over 540 responses, and when we combined duplicates and books from the same series, we got a very-big-not-small list of books that warm your hearts. Check out the list below:

The Name of The Wind by Patrick Rothfuss

The Enchanted Orchards by Kristin Maddock

The Christian Atheist by Craig Groeschel

The Kissing Hand by Audrey Penn

Love in the Time of Cholera by Gabriel Garcia Marquez

The Bone Clocks by David Mitchell

The Alchemist by Paulo Coelho

Clan of the Cave Bear by Jean M. Auel

The Breakfast of Champions by Kurt Vonnegut

Gone With the Wind by Margaret Mitchell

The Unbearable Lightness of Being by Milan Kundera

The Three Musketeers by Alexandre Dumas

Gift from the Sea by Anne Morrow Lindbergh

Psyche in a Dress by Francesca Dia Block

Face of an Angel by Denise Chavez

The Chronicles of Narnia by C. S. Lewis

The Five People You Meet in Heaven by Mitch Albom

Horton Hears A Who! by Dr. Seuss

A Walk to Remember by Nicholas Sparks

The Blazing World by Siri Hustvedt

A Constellation of Vital Phenomena by Anthony Marra

The Fountainhead by Ayn Rand

Possession by AS Byatt

Life Together by Dietrich Bonhoeffer

The Earth, My Butt, and Other Big Round Things by Carolyn Mackler

The Wind in the Willows by Kenneth Grahame

The Dark is Rising by Susan Cooper

The Forty Rules of Love by Elif Shafak

The Book of Three by Lloyd Alexander

Someone to Run With by David Grossman

The Enchiridion of Epictetus

The Vampire Lestat by Anne Rice

The Beautiful and Damned by F. Scott Fitzgerald

The Book of Ruth by Jane Hamilton

The Hours by Michael Cunningham

The Fortress of Solitude by Jonathan Lethem

Bite of the Mango by Mariatu Kamara, Susan McClelland

James and the Giant Peach by Roald Dahl

Island of the Blue Dolphins by Scott O’Dell

Eyeless in Gaza by Aldous Huxley

More Than This by Patrick Ness

Where the Sidewalk Ends by Shel Silverstein

The Reason For God by Timothy Keller

A Snicker of Magic by Natalie Lloyd

The Secret by Rhonda Byrne

The 7 Habits of Highly Effective People by Stephen Covey

A New Earth by Eckhart Tolle

Heir to the Empire by Timothy Zahn

Tales of the South Pacific by James A. Michener

Before I Fall by Lauren Oliver

The Diary of Anne Frank

Dombey and Son By Charles Dickens

The Brief Wonderous Life of Oscar Wao by Junot Diaz

The Selfish Gene be Richard Dawkins

The Plague by Camus

The Girl with the Flammable Skirt by Aimee Bender

The Secret Life of Bees by Sue Monk Kidd

The Diviners by Margaret Laurence

The Favourite Game by Leonard Cohen

Tuesdays with Morrie by Mitch Albom

Love You Forever by Robert Munsch

No Great Mischief by Alistair MacLeod

Devil in the White City by Erik Larson

Same Kind of Different As Me by Ron Hall

The Care and Feeding of Griffins by R. Lee Smith

It Starts With Food by Melissa Hartwig and Dallas Hartwig

Odd Girl Out by Ann Bannon

Lamb: The Gospel According to Biff by Christopher Moore

Any Human Heart by William Boyd

The Prophet by Khalil Gibran

The Brothers Karamazov by Fyodor Dostoevsky

Ain’t Nobody’s Business If You Do by Peter McWilliams

The Elements of Style by Strunk and White

Charlie and the Chocolate Factory by Roald Dahl

Are You There God? It’s Me, Margaret by Judy Blume

The Amazing Adventures of Kavalier and Clay by Michael Chabon

Some Assembly Required by Anne Lamott

Memoirs of an Imaginary Friend by Matthew Dicks

The Power and the Glory by Graham Greene

A Ring of Endless Light by Madeleine L’Engle

Judging a Book by Its Lover by Lauren Leto

Mondays are Red by Nicola Morgan

The 100: A Ranking of the Most Influential Persons in History by Michael H. Hart

Skipping A Beat by Sarah Pekkanen

The Thirteenth Tale by Diane Setterfeld

The Sisterhood of the Traveling Pants by Ann Brashares

In God We Trust, All Others Pay Cash by Jean Shepherd

For Whom the Bell Tolls by Ernest Hemingway

A Farewell to Arms by Ernest Hemingway

Nothing to be Frightened Of by Julian Barnes

Kill Your Self: Life After Ego by Barry Graham

The Bourne Identity by Robert Ludlum