This giveaway is sponsored by The Radium Girls by Kate Moore. 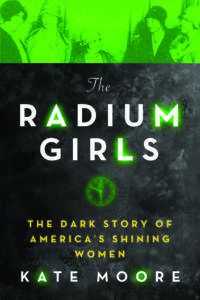 The Curies’ newly discovered element of radium makes gleaming headlines across the nation. From body lotion to tonic water, the popular new element shines bright in the otherwise dark years of the First World War.

Meanwhile, hundreds of girls toil amidst the glowing dust of the radium-dial factories—the glittering chemical covers their bodies from head to toe. With such a coveted job, these “shining girls” are the luckiest alive – until they begin to fall mysteriously ill. As the fatal poison of the radium takes hold, the brave shining girls find themselves embroiled in a groundbreaking battle for workers’ rights that will echo for centuries to come.

Sisters are doin’ it for themselves! …Or the nation, the world, the universe. Women make history, break boundaries, and some have their stories told. We asked you to share your favorite non-fiction books about women’s history, and you responded. Here are 25 of your favorites!

The Underground Girls of Kabul: In Search of a Hidden Resistance in Afghanistan by Jenny Nordberg

For the Right to Learn: Malala Yousafzai’s Story by Rebecca Langston-George

The Girls of Atomic City: The Untold Story of the Women Who Helped Win World War II by Denise Kiernan

Outrageous Women of the Civil War Times by Mary Furbee

Founding Mothers: The Women Who Raised Our Nation by Cokie Roberts

To the Heart of the Nile: Lady Florence Baker and the Exploration of Central Africa by Pat Shipman

The Girls of Murder City: Fame, Lust, and the Beautiful Killers Who Inspired Chicago by Douglas Perry

She-Wolves: The Women Who Ruled England Before Elizabeth by Helen Castor

Headstrong: 52 Women Who Changed Science-and the World by Rachel Swaby

Mrs. Pankhurst & the Right to Vote: The Leader of the Women’s Suffrage Suffrage Movement in Britain by Cicely Hamilton, Emmeline Pankhurst, and Frank Moxon