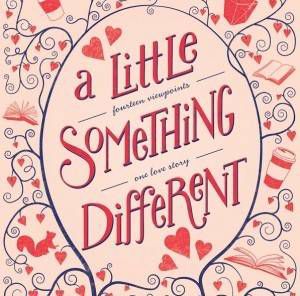 This installment of the Riot Recommendation is sponsored by A Little Something Different by Sandy Hall.

Lea and Gabe are in the same creative writing class. They get the same pop culture references, order the same Chinese food, and hang out in the same places. Unfortunately, Lea is reserved, Gabe has issues, and despite their initial mutual crush, it looks like they are never going to work things out.

But somehow even when nothing is going on, something is happening between them, and everyone can see it. Their creative writing teacher pushes them together. The baristas at the local Starbucks watch their relationship like a TV show. Their bus driver tells his wife about them. The waitress at the diner automatically seats them together. Even the squirrel who lives on the college green believes in their relationship.

Surely Gabe and Lea will figure out that they are meant to be together….

Maybe the heroine overhears a conversation out of context. Maybe the hero sees his love interest hugging a strange man in a restaurant and gives up hope (turns out, it’s her cousin). There’s something especially rewarding about watching a couple who just. Can’t. Get it together. Finally find themselves in each other’s arms.

We asked you to tell us your favorite romances based on misunderstandings, and you delivered. Here are your top 22 picks:

Just One Day and Just One Year by Gayle Forman

A Company of Swans by Eva Ibbotson

Sushi For Beginners by Marian Keyes

Gone With The Wind by Margaret Mitchell

Being Sloane Jacobs by Lauren Morrill

Romeo and Juliet by William Shakespeare