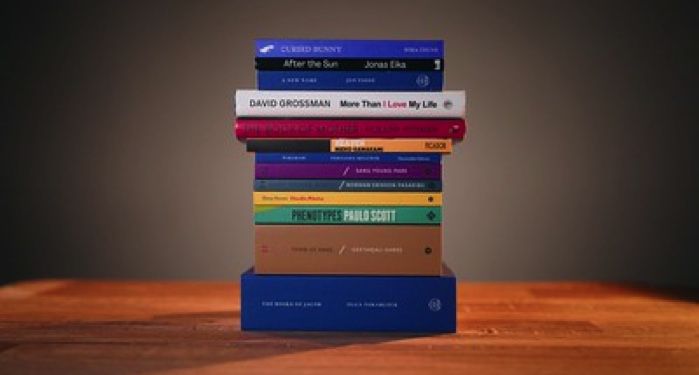 Honoring the finest works of translated fiction from around the world, the International Booker Prize has announced its 2022 longlist. The prize is awarded every year to a single book translated into English and published in the UK and Ireland. It aims to encourage more publishing and reading of international fiction from all over the world and to promote and recognize the vital work of translators. The £50,000 prize is split between the winning author and translator. The shortlist will be announced April 7th and the winner will be announced May 26th.

This year’s thrilling longlist includes books from 11 languages and 12 countries across four continents, with the notable inclusion of Hindi for the first time in the prize’s history. Independent presses continue to dominate the list. Tilted Axis, the publishing house founded by Booker International Prize-winning translator Deborah Smith, is on the list for the first time with three titles, including Tomb of Sand by Indian writer Geetanjali Shree, translated from Hindi by Daisy Rockwell; Happy Stories, Mostly by Norman Erikson Pasaribu, translated from Indonesian by Tiffany Tsao; and Love in the Big City by Sang Young Park, translated from Korean by Anton Hur. Publisher Fitzcarraldo Editions is also on the list with three titles.

The list is a fascinating mixture of books by writers and translators new to the prize as well as past nominees and notably two winners. Nobel Prize Laureate Olga Tokarczuk and translator Jennifer Croft won the International Booker in 2018 with Flights and David Grossman and translator Jessica Cohen won in 2017 for A Horse Walks Into a Bar. They are joined by exciting newcomers like Bora Chung and Sang Young Park, both translated by Anton Hur — a rare and impressive feat — among many others.

Frank Wynne, chair of the judges, commented on the longlist, mentioning Borges’ famous belief that “paradise would be ‘a kind of library’, and spending the past year in the company of some of the world’s great writers and their equally gifted translators has been a kind of heaven. From the intimate to the epic, the numinous to the profane, the books make up a passionately-debated longlist that trace a ring around the world. These 13 titles from 12 countries and 11 languages explore the breadth and depth of human experience, and are a testament to the power of language and literature.”

The longlist was selected by a panel of five judges: translator Frank Wynne, author and academic Merve Emre, writer and lawyer Petina Gappah, writer and comedian Viv Groskop, and translator and author Jeremy Tiang. Wynne is the first translator to chair the judges panel.

After The Sun by Jonas Eika, translated from Danish by Sherilyn Nicolette Hellberg

More Than I Love My Life by David Grossman, translated from Hebrew by Jessica Cohen

The Book of Mother by Violaine Huisman, translated from French by Leslie Camhi

Heaven by Mieko Kawakami, translated from Japanese by Samuel Bett and David Boyd

Paradais by Fernanda Melchor, translated from Spanish by Sophie Hughes

Love in the Big City by Sang Young Park, translated from Korean by Anton Hur

Phenotypes by Paulo Scott, translated from Portuguese by Daniel Hahn

Tomb of Sand by Geetanjali Shree, translated from Hindi by Daisy Rockwell

The Books of Jacob by Olga Tokarczuk, translated from Polish by Jennifer Croft

And if you’re looking for even more great recommendations for international literature, check out the novel that won the International Booker last year. Following the announcement, sales of the winner increased 477% and President Barack Obama listed it at the top of his summer reading list. And you can browse last year’s complete longlist.