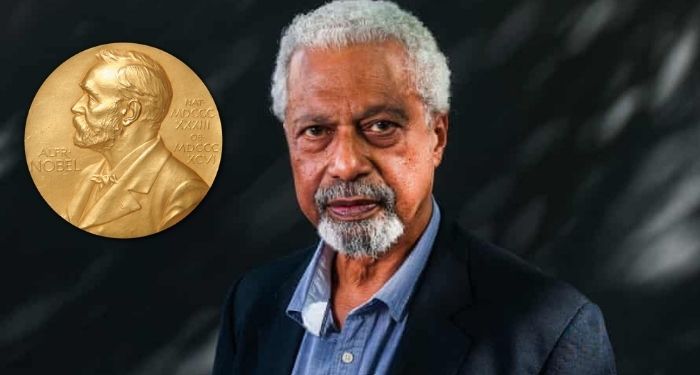 The Swedish Academy has awarded the 2021 Nobel Prize in Literature to the novelist Abdulrazak Gurnah for his “uncompromising and compassionate penetration of the effects of colonialism and the fate of the refugee in the gulf between cultures and continents.” The Tanzanian author, who now resides in the United Kingdom, is the author of ten novels and, as cited by the Academy, “the theme of the refugee’s disruption runs throughout his work.”

Born in 1948, Gurnah grew up on the island of Zanzibar, now part of Tanzania, but arrived in Britain as a refugee in the 1960s. He was 18 years old. He began writing at 21, and while Swahili was his first language, he wrote his novels in English. His prose, however, often includes Swahili, Arabic, Hindi, and German. His novel Paradise was shortlisted for the Booker Prize in 1994 and his most recent work is Afterlives. Chair of the Nobel Committee, Anders Olsson, stated during Thursday’s press conference that, Gurnah “is widely recognized as one of the world’s more pre-eminent post-colonial writers.”

Olsson also states that, “Gurnah’s dedication to truth and his aversion to simplification are striking. This can make him bleak and uncompromising, at the same time as he follows the fates of individuals with great compassion and unbending commitment. His novels recoil from stereotypical descriptions and open our gaze to a culturally diversified East Africa unfamiliar to many in other parts of the world. In Gurnah’s literary universe, everything is shifting – memories, names, identities. This is probably because his project cannot reach completion in any definitive sense. An unending exploration driven by intellectual passion is present in all his books, and equally prominent now…as when he began writing as a 21-year-old refugee.”

Gurnah is the first Black African to win the award in more than three decades and the first Tanzanian to writer to win. He is the fifth African writer overall, after Wole Soyinka of Nigeria in 1986, Naguib Mahfouz of Egypt in 1988, and the South African winners Nadine Gordimer in 1991, and John Maxwell Coetzee in 2003. Gordimer and Coetzee are of European descent, born in South Africa.

At Thursday’s press conference, Olsson was asked if the current migrant crisis in Europe influenced the committee’s decision to choose a writer who reckons with migration, displacement, and exile in their work. He responded that, “I don’t think the acute situation right now in Europe and around the Mediterranean has affected this prize because the phenomenon of exile and migration has been there for many years…But it is quite clear that his writings are extremely interesting and powerful right now in Europe and around the world.” He added, “We are affected by what is happening in the world and it would be very strange otherwise.”

In recent years, the Swedish Academy has been public in its desires to move the award away from its current “Euro-centric” and “male-dominated” approach. The Nobel Prize in Literature has been awarded to 16 women since 1901, with seven of those awards in the 21st century, most recently American poet Louise Glück, last year’s recipient, Polish author Olga Tokarczuk in 2018, and Belarusian journalist Svetlana Alexievich in 2015. While an improvement over the previous century, the ratio of male to female winners in the 21st century is 2:1.

The award has continued to be dominated by European writers, most controversially Peter Handke, who received the 2019 Nobel. Handke has been strongly criticized for his views and writings about the Yogoslav wars and notably his support of the late Yugoslav President Slobodan Milošević, who had been charged with crimes against humanity before his death in jail awaiting trial. His support of Yugoslav President Slobodan Milošević — including his eulogy at Milošević’s funeral — has led to him being described as an apologist for far-right Serbian nationalism.

You can learn more about previous winners and the financial and sexual scandals that rocked the Swedish Academy in our archives:

The Nobel Prize in Literature to be Awarded Again

The Swedish Academy Elects Two New Members. Is the Nobel Prize Back on Track?

The Nobel Prize in Literature. Where Do We Go From Here?

The Disintegration of the Swedish Academy. Is This the End for the Nobel Prize in Literature?