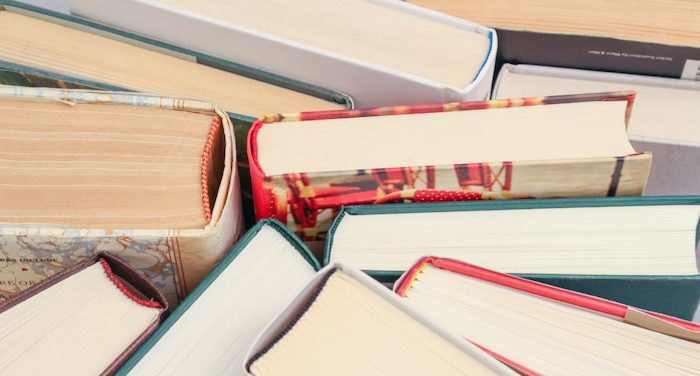 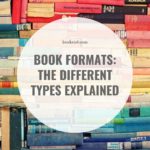 You’re reading this article because you love books. I’m writing it for the same reason. But how much do you know about the books themselves? Why are they shaped the way they are? Why are there so many different book formats? How can you fit all of these different sizes of books on your bookshelf?

For that last question, I have no answer. Though that hasn’t stopped others from trying to make sense of all of these mismatched sizes.

“It is, admittedly, all too easy to take the existence of physical books for granted,” writes Keith Houston in The Book. “The sheer weight of them that surrounds us at all times, in bookcases, libraries, and bookshops, leads to a kind of bibliographic snow blindness.”

What does all this mean? What’s a mass market paperback, and how’s it different from any other paperback? Why are books different sizes anyway? Let’s revisit the different types of book formats and why each exists.

Before we go any further, a note on terminology: “Trim size” is publishing industry speak for book size. After a book is bound, it’s trimmed down to one of several uniform sizes—sizes for which, in the United States, you actually have Woodrow Wilson to thank.

As Houston outlines in The Book, a wonderfully thorough history of, well, the book, standard book trim sizes are a relatively modern invention. Standardization didn’t start in the U.S. until 1921, when the Wilson administration established two committees dedicated to defining paper sizes: the Permanent Conference on Printing and the Committee on the Simplification of Paper Sizes.

That pair of granularly named committees is responsible, for example, for our standard letter sizes (8 x 10 ½ inches and 8 ½ x 11 inches). How they arrived at such a definition is telling. The dimensions, Houston writes, were (super scientifically) copied from Secretary of State Herbert Hoover’s personal letter paper.

Regardless, any time I refer to “trim size,” I’m merely referring to the actual size of the book.

What they are: Hardcovers, sometimes referred to as “trade cloth” books, are hardbound books with sewn spines. When you buy them new, they may come with removable dust jackets to protect their covers.

Where you see them: Most new releases arrive in hardback first, followed by a paperback release around a year later.

Likely, you’ll see them in your local library, too. Hardcovers—especially those with reinforced library binding—hold up better over time for multiple borrowers, particularly with popular titles, according to Leah Oswald, a reference librarian with the Austin Public Library. Books with lower expected circulation, meanwhile, often get stocked in cheaper paperback form.

Where you won’t see them: A lot of genre fiction (romance, science fiction, fantasy) dispenses with the hardcover format. Many books from indie presses likewise debut in paperback.

Why they exist: Prior to the hardcover, ancient book formats vacillated between various forms of parchment and papyrus scrolls. While these scrolls and bookrolls became increasingly durable, usability problems remained.

“It takes two hands to simultaneously unfurl a bookroll at one end and roll it up at the other,” Houston writes in The Book. “There is no way to casually prop open a scroll in one hand while sipping from a glass of wine held in the other.”

Hardcovers exist for their durability and relative convenience. Their (typically) rectangular, solid shapes behave nicely on bookshelves! And until World War II, they were really the only trim size available. (More on that in a second.)

Today, publishers still put out hardcovers first for the simple fact that they sell, as Philip Jones, editor of publishing-industry magazine The Bookseller, explained in an interview with The Guardian. Citing data from Nielsen BookScan, Jones said hardcovers compose roughly 20% of the printed fiction market.

And as Mental Floss notes, hardcover releases followed up by paperback releases give publishers two big marketing opportunities for any given title—double the chances that book will end up in your hands.

What they are: Trade books are what we consider “standard” paperbacks.

Where you won’t see them: Most books are published in paperback (at some point), but there is the whole oversized books market, which we’ll discuss in a moment.

Why they exist: Paperbacks of any size exist because of their accessibility, affordability, and portable nature. But the mainstreaming of paperbacks in the United States is largely a product of World War II.

Penguin began publishing its cheaper, commuter-friendly paperbacks in Britain in 1935. Pocket Books followed suit in the United States in 1939 with its own lines of books stocked in accessible consumer locations like newsstands. Certainly, there was an audience, which Andrew Liptak documented for Kirkus. In a country still buffeted by the Great Depression, hardbacks were out of economic reach even for the traditional “reading classes.”

And then World War II.

Prior to the 1930s and ‘40s, the American paperback market was the dominion of pulp novels and comics. So-called serious literature was available in costly hardcover forms. But wartime America created a new audience of soldiers hungry for the comforts of home and a distraction, as The Atlantic’s Yoni Appelbaum reports.

In a partnership between publishers and the U.S. military, cheap Armed Services Edition paperbacks were produced on magazine presses and sent to the front lines, as Cara Giaimo writes for Atlas Obscura. Available titles included popular pulp favorites like westerns but also classic and best-selling books previously published only in hardcover—all sold to the Army for just 6 cents a book.

When those soldiers returned home, there was no going back to days without a less expensive, widely available, easily held book format.

What they are: If the hardcover is the Range Rover, the trade paperback is the luxury sedan. The mass market paperback? It’s the 2006 Toyota Corolla you’ll drive until one of you dies. Designed for affordability rather than perceived elegance, mass market paperbacks are typically smaller with tighter typeset.

Where you see them: Romance novels, but also much of adult genre fiction, including science fiction and mystery. (No doubt you’ve seen the vivid fantasy covers of mass market paperbacks at your favorite used bookstore.)

Where you won’t see them: Curiously, the industry segment with a gaping mass market hole is the current YA landscape. You’d think books intended for youth audiences would be printed in the cheaper, more easily maneuverable format, no? At least, you’d think that if you’d spent as much time with mass market Christopher Pike thrillers as a teen as I did.

Why they exist: At 4 x 7 inches, they’re perfect to throw in your bag, though that convenience is also the reason why you’ll find them in used bookstores, their covers tattered from being loved too much.

Dedicated readers of genres like romance get very attached to the hand-feel of mass market paperbacks. They’re easy to hold and easy to stow. That’s why Harlequin and Kensington’s announcements about the “mass max” paperback are such big news. The mass max books will measure an expanded 4.75 x 7 inches. That may not seem like a big increase, but think about the size of your palm in comparison to ¾ of an inch.

Time will tell if the mass max will eclipse the smaller mass market paperback or even eat into the number of books published as trade paperbacks.

What they are: Finally, we arrive at coffee table books. These massive hardcovers are most likely what you artfully stack in the living room before guests come over.

Where you see them: Typically, you’ll see oversized art books, photography collections, and cookbooks, as well as nonfiction books that otherwise rely on visuals and imagery. Occasionally, you’ll see graphic novels appear in this format for collected volumes like Saga.

Where you won’t see them: Barring unusual circumstances or unique publisher whims, you’re not going to be lugging home any oversized novels or works of narrative nonfiction.

Why they exist: Oversized books for display have been around for centuries, but David Brower, the first executive director of the Sierra Club, is commonly credited with inventing our modern coffee table book.

In Natural Visions: The Power of Images in American Environmental Reform, author Finis Dunaway explores the reasons behind the Sierra Club’s “Exhibit Format” books, which paired nature photos from the likes of Ansel Adams with text from nature writers.

These “large, heavy books, measuring over 10 inches wide by over a foot long” were part of a coordinated campaign to lobby Congress on wildlife protection bills, Dunaway writes: “Sierra Club artists used the camera to present nature as sacred and sublime; their photographs encouraged audiences to view wilderness as a place where people are visitors who do not remain.”

They were on to something. Nature photography remains a huge subject for these oversized books, though only one of many to take advantage of this visually striking form.

So that’s it. That’s a brief look at the most common trim sizes for books. Are there other book formats? Yes, as evidenced by spiral-bound cookbooks or children’s board books. If you’re interested in learning even more about books as an entity, give these 10 Nonfiction Titles That Will Change the Way You See Books a try.