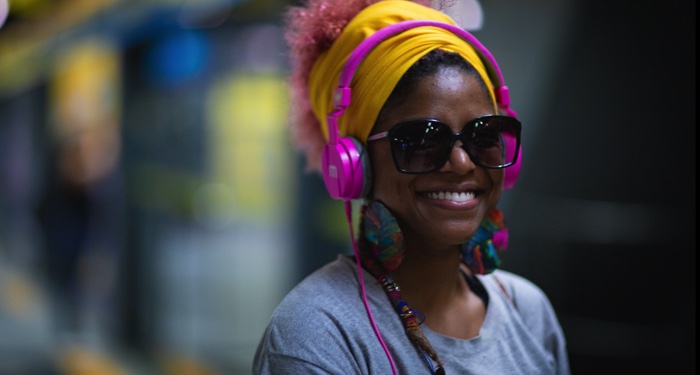 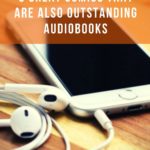 I have a new favorite thing: audiobook versions of graphic novels and memoirs. I love them for a host of reasons. For one, they make graphic novels and memoirs accessible to more people. For another, it’s super cool that it’s possible to translate art between different forms. I never would have considered making an audiobook out of a graphic novel, but now that I’ve listened to several, I can see that this was just a lack of imagination on my part. An audiobook made from a book of sequential art is not the same as the original. But it’s also not worse than the original. It’s merely a different way to experience the story. And that’s awesome. The more ways we have to experience books, the better.

I read some of these books first as graphic novels and memoirs, and then reread them as audiobooks. Some of them I’ve only read on audio, and I loved that experience just as much. While listening to the books I hadn’t read in print first, I found myself continually imagining the art. Just knowing the book was originally told in graphic form awakened my imagination in ways I didn’t expect. I don’t generally see pictures in my mind when I’m listening to an audiobook. But that’s exactly what happened while listening to these books. It was such a cool experience.

Here are five of my favorite graphic novels and memoirs on audio (so far). They’re all full-cast productions, which makes for a rich and immersive listening experience. In addition to talented voice actors, these audiobooks also feature music and tons of sound effects. Listening to comics on audio is not confusing or strange; it’s just really fun. As an added bonus, all of these audiobooks are under three hours—graphic novels and memoirs also make for fantastic quick listens. 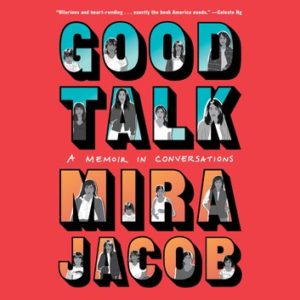 This was one of my favorite reads of 2019, and rereading it on audio was an absolute treat. I was actually blown away by how good the audiobook was; it’s one of those books that feels like it was made to be preformed out loud. This makes sense, because it’s mostly a series of conversations between Jacob, an Indian American woman, and her 6-year-old biracial son. She uses her son’s questions about race and politics as a jumping-off point for a moving and complicated exploration of racial identity, immigrant experiences, American history, family, and parenting in 21st century America. She weaves stories of her own childhood and young adulthood into the conversations she has with her kid, and the whole thing is funny and heartbreaking, full of anger, insight, and hope. I especially loved hearing Jacob read this herself, and the full cast that accompanies her is fantastic. There were definitely some exchanges that made me cry; hearing them out loud just added to the emotional impact of this book 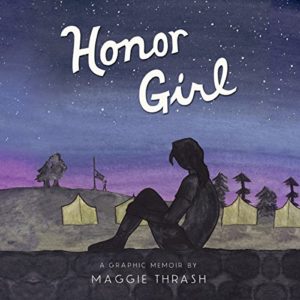 by Maggie Thrash, read by a full cast

In this coming-of-age memoir, Maggie Thrash recounts one memorable summer at a Christian camp for girls, where she falls in love for the first time, crushing on one of her counselors. This memoir poignantly captures the isolation and confusion of being a queer kid in a straight world. The audiobook is beautifully done. The voices of the teenage girls Maggie encounters at camp are especially on-point. Some are mean, some supportive, some vindictive, some just thoughtless. Listening to them brought me right back to being that age, and how it felt like the kids around me were the entire world. The audiobook also uses singing and laughing to great effect. So much emotion gets conveyed via voices and sound effects—whether the sound of someone slipping into a body of water, or ten different girls all laughing at once. Voices replace visual art in a way that feels completely natural. 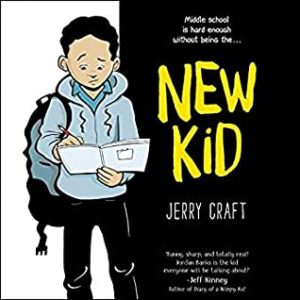 by Jerry Craft, read by Jesus Del Orden and a full cast

Jordan loves art, and especially drawing cartoons about his life, so he’s not super excited when his parents send him to a prestigious private school at the start of 7th grade, instead of the art school he’s been dreaming about. To make matters worse, he’s one of the few kids of color in the whole school, and he doesn’t feel like he fits in anywhere. I didn’t read the print version of this before I listened to it, and I loved the way the narration pulled me into Jordan’s world. His comics feature heavily in the book, but the creative sound effects that distinguish them from the rest of the narrative made it feel like I wasn’t missing anything. Jesus Del Orden, as Jordan, is particularly expressive, and the full cast brings alive the many people in Jordan’s world—parents, neighbors, friends, teachers, coaches, and classmates. However you chose to read it, it’s a relatable and uplifting book that delves into issues of race, class, privilege, and the ways kids judge each other. 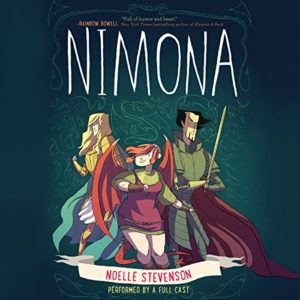 This is one of my favorite graphic novels ever, and it’s just as funny and smart and moving on audio. Nimona is a shapeshifter who comes to work for Lord Ballister Blackheart, supervillain. He’s trying to bring down his rival and old flame, Sir Goldenloin, who works for the kingdom’s government as a hero. The actors who portray the various unforgettable characters in this fantasy world are all superb. So are the sound effects. There’s a lot of action in this novel, including many battles, and I actually found some of it hard to listen to—not because it was ever confusing, but because it was so well done that it brought me closer to the story, emotionally. The stark differences between the tender scenes and the scary scenes are exacerbated on audio. The whole thing is a brilliant work of art, one that I know I’ll reread, and re-listen to, many more times. 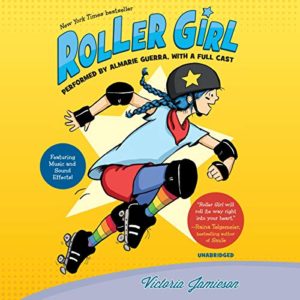 by Victoria Jamieson, read by Almarie Guerra and a full cast

This middle grade story about friendship, change, and figuring out who you want to be is an absolute audio gem. Astrid and Nicole have always been best friends, but when Astrid signs up for roller derby camp, Nicole signs up for dance camp instead. Even worse, she starts spending all her time with a girl Astrid doesn’t even like, leaving Astrid to tough it out at derby camp on her own. It’s full of relatable middle school characters who are messy and imperfect and sometimes self-absorbed. The narration brings them to life in the way I imagine the art does; the kid voices are very well done. There’s also a lot of roller derby action, beautifully conveyed through sound effects. I definitely felt like I was at a bout. I listened to this book in one sitting and didn’t want it to end.