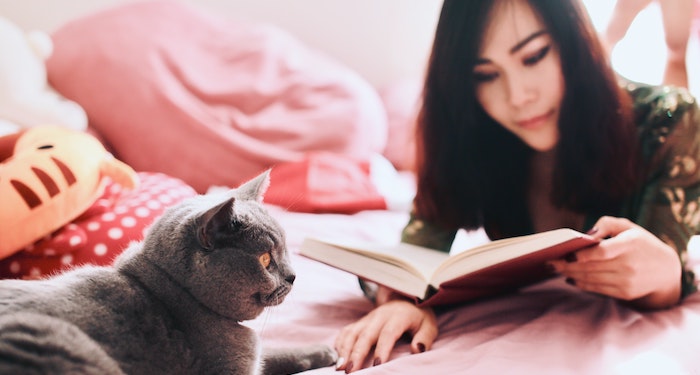 We are now well over a month into *gestures around* all of this in the U.S. and, like many readers, I’ve been disengaged and distracted, unable to muster the excitement to sit down and read a book or even pop in an audiobook. The cognitive load of daily worries—what will happen to my business? how will we get groceries? did I sanitize everything enough enough? how are my grandparents doing?—is a very real thing that none of us can downplay right now.

Even though I’m incredibly grateful that I’m not a frontline employee, that my family is remaining healthy, and I do still have a relatively stable job, I’m also practicing greater grace and balance during this pandemic. That means not pushing myself to do things just because I should or in honor of the “productivity” gods or that I enjoyed them when times were less stressful. And one of those things that fell by the wayside early on was reading.

Don’t get me wrong; I was reading more than ever. But instead of deep, satisfying reads, I was poring over news and Reddit and, most of all, Medium articles with titles like “Wash Every Grocery Bag Before It Comes Into Your House” and “No, You Don’t Need To Really Wash Every Grocery Bag” and “10 Reasons Why COVID-19 Will Absolutely Destroy Your Brain” and “Maybe Coronavirus Is On Your Dog!” (and a perennial favorite, “I Recreated This Trash Snack At Home And This Is What Happened”).

Truly, there’s nothing wrong with reads like these, but on a high enough dose, they had the same effect on my brain as that giant batch of cookies I baked had on my stomach. Satisfying in the moment, but not great as continued sustenance.

After a few weeks of that (and the associated anxiety spirals, thankyouverymuch), I looked at what I needed, what I wanted, and what didn’t serve me right now. A constant barrage of news and think pieces? Nope. A long, doorstopper of a book that I could sit and read for hours? Also, nope.

My brain is craving quick bits of information. Short reads that seem manageable and doable. Five-minute escapes before jumping back into work or grocery sanitation. So, I turned to short essay collections, enjoying one or two or ten at the start of my day when I would normally be cycling through a veritable fuck-storm of open news tabs. And…they helped.

My hope is that they’ll help some of you who are looking for shorter reads, too. The short essay collections I’ve especially enjoyed recently include the following. 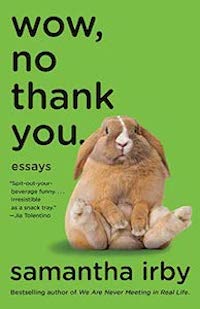 Wow, No Thank You. by Samantha Irby

Books rarely make me cackle, but Irby’s essays on the horrors of making adult friends and reminiscing about the art of mix-tapes and living as a lesbian in a rural community and trying to figure out what the hell to do with a house, are consistently hilarious.

Irby weaves from house ghosts to cats, from trash television to uterine ablation, with a relentless stomp. I think of her line (from an essay on home repairs): “that cherry tomato that rolled under the unreachable corner cabinet: what’s gonna happen to it” at least three times a day.

She is vulnerable and messy and I will not stop pressing her books into people’s hands (erm sending them copies with contact-less delivery). Irby is a one-click author for me, someone I will read no matter the time or season, but especially now, her words are a balm—as joyful as eating a bowl of cereal in bed at 10:00 a.m.

Don’t believe me? Read “The Worst Friend Date I Ever Had” from the collection now. 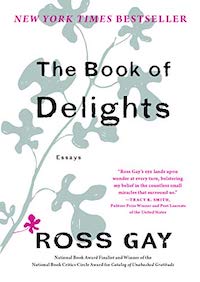 Gay was one of those poets I had been meaning to read for months, but never got to. During a time when each hour brings another news story or catastrophic turn in global events, I was suddenly grateful his book had sat on my TBR list for so long and that it found me again at this moment in time.

The Book of Delights is exactly what it sounds like: every day for a year, Gay wrote about a single “delight” in his life and collected ~100 of those into this book. They’re short essays that are composed in prose with the ear of a poet. Each essay is an invitation to slow down and pay attention, each elevating the mundane to the transcendent—a bag left on a train seat shows our impulse to help, a soft scarf illuminates Gay’s own maturing. They’re short five-minute reads that linger long after reading.

If you want a taste of Gay’s work, one of the great essays from the book “Loitering Is Delightful” was reprinted in The Paris Review. 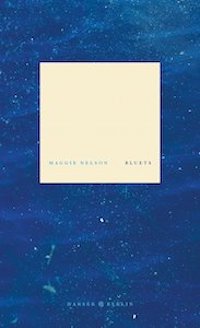 Like Gay, Bluets hyper-focuses on one thing to illuminate the larger world around us. (With a world that seems out of control and chaotic, it’s not an accident that I’m gravitating towards writing that draws inwards, into stillness, into a single unobstructed examination).

Instead of delight, Nelson focuses on the color blue. Her fragmented essays comprise a study of blue, its uses over time, its history in the world and in her body. Nelson’s are the shortest essays on this list, some only a sentence or paragraph long, that together recreate loneliness, longing, and lightness.

All of that in a single color.

Dig into some of Nelson’s work with four poems of hers published in BOMB.

You can also keep up with our bookish COVID-19 coverage here. Beyond short essay collections, our contributors have been recommending their favorite uplifting books, their feel-good fantasy reads, and just general thoughts on what to do if you can’t read right now.

Of course, I haven’t been exclusively reading essays. Downtime, when I have it, is just as equally spent reading as it is playing Animal Crossing and taking long walks and painting my nails and generally staring off into space. And, that’s totally okay. My part to play is simply staying the hell at home and letting smarter people than me figure this thing out. The loss of control is terrifying, but the scrabble and need to do something to help is also a constant battle with no easy answers.