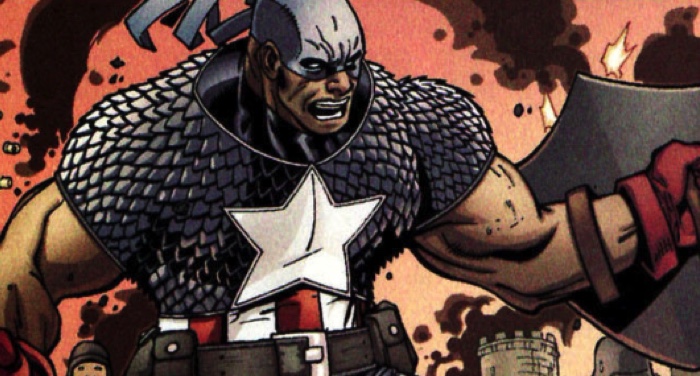 Eight centuries ago, in February, Marvel announced Carl Lumbly had been cast for an unspecified role in The Falcon and The Winter Soldier. As is often the case when such announcements are made, speculation as to what that unspecified role might be began immediately, though, in a deviation from the norm, the majority of outlets came to the same conclusion: the most likely role for Lumbly, who is 68 and thus exactly the right age to play a phase one super solder serum enhanced WWII vet, is Isaiah Bradley.

I swear on America’s Ass I saw an article confirming and also revealing that Sam was initially going to refuse the shield, then rethink that refusal after meeting Bradley, but of course now I can’t find it because Twitter won’t let me scroll back 10,000 years and I accidentally deleted the text thread a friend sent the article to me on. IMDB lists Lumbly as a member of FATWS‘ cast but, in typical Marvel ha ha hahaha, we know something you don’t know fashion, no character name is yet listed.

For the sake of argument, let’s say Lumbly is going to be portraying Bradley and, even if he’s not, let’s talk a little bit about who Isaiah Bradley is—because if you don’t know, you should. 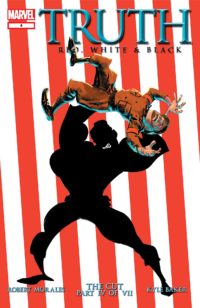 The story is more complicated than that, of course.

Steve Rogers agreed to be experimented on, had the risks and benefits of super soldier serum and Vita Rays laid out before anyone laid a hand or a hypodermic on him, and he consented to the possibility of death. Isaiah Bradley didn’t.

He was never given the opportunity to consent. Neither were the other men in his unit.

They were never given the opportunity to consent because they were black.

And before you think, “What? Our government would never do that!” let me tell you a little bit out the Tuskegee Experiment.

And before you go all conspiracy theorist, the study information I’m going to cite here is a very tame version from the CDC. The data sources we used in my medical ethics class were much less balanced and certainly less neutral.

In 1932, the public health service, working with the Tuskegee Institute, decided it wanted to study the natural progression of syphilis; study time. That study was named “Tuskegee Study of Untreated Syphilis in the Negro Male” which should raise all kinds of red flags because “untreated,” but let us proceed. The Tuskegee study was initially slated to last six months; it was extended for forty years with new participants being added as others died. The initial participant pool was comprised of 600 black men, 399 of whom tested positive for syphilis and 201 of whom did not. They were told only that they were being studied for “bad blood” and they were not offered the treatment being used at the time which, while only 30% effective and ultimately involving a toxic amount of mercury, was widely available. Nor were they offered the option of leaving the study and being treated with penicillin when that safe, effective alternative was introduced in 1947. It wasn’t until Nineteen seventy-two (1972) that the Assistant Secretary for Health and Scientific Affairs (and then only because the Associated Press published A Story) appointed a panel to review the Tuskegee Study. The panel found that the participants had never been informed of the true purpose of the study and had, in fact, been deliberately misled, thus preventing informed consent. Additionally, they had been denied the opportunity to leave the study and receive treatment when it became available. The study was deemed unethical and ended in October 1972.

What does this have to do with Isaiah Bradley?

When Robert Morales and Kyle Baker created Truth: Red, White & Black in 2003, they infused the story of those so cruelly used by the government into the background of one of our greatest fictional heroes to remind us to look harder and dig deeper at what seems so deceptively golden and shining. And while that doesn’t change the risk Steve took, it does mean the story isn’t all about him and that ignorance isn’t the excuse we like to pretend it is. That “I didn’t know” is a rationalization not a defense.

It’s not a defense when an entire unit, already facing racism, is loaded into a truck in the middle of the night and taken away to be experimented on. When their families are told they’re dead and when many of them do die from the effects of the super soldier serum. When the army blames their mistakes on the survivors and then give credit for everything they’ve endured to a blonde haired, blue eyed white boy who looks a lot like the men they’re supposed to be fighting, even if that white boy happens to have a good heart and the right intentions. 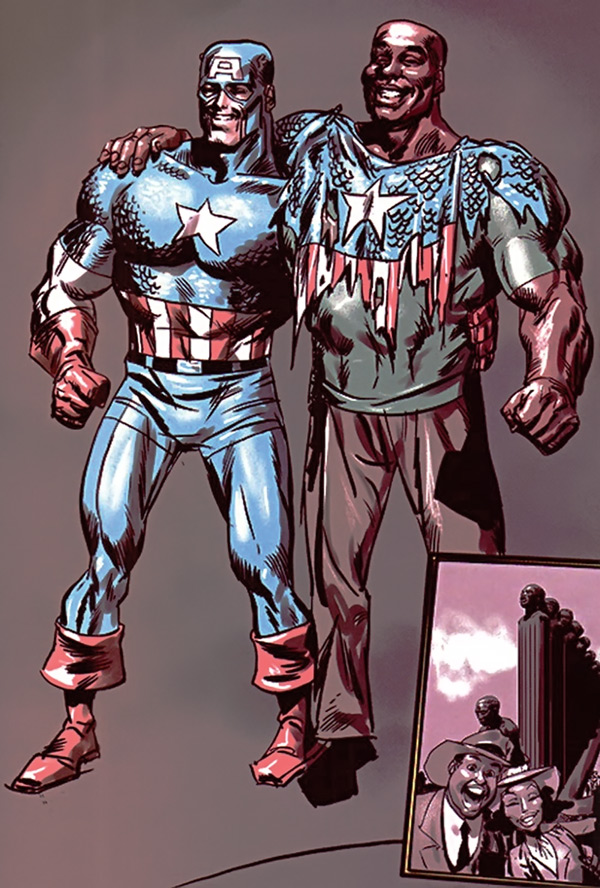 It’s not a defense when a member of that abused and violated unit discovers the U.S. government is as bad as the Nazis, maybe worse. When he survives the shock and ensuing battle only to be captured, to spend five months in Auschwitz. To make it through that time in one of the worst concentration camps, to finally arrive home only to get court-martialed for stealing Captain America’s uniform.

The uniform that’s rightfully his.

For daring to survive, daring to know the truth, for daring to do what other men were too afraid to do, Isaiah Bradley spent 17 years in Leavenworth. The government that made him allowed the neurological damage wrought by the early version of the super soldier serum run rampant, to destroy his brain and when he was, finally, finally allowed to go home, the VA denied his benefits because the program that made the serum that damaged him irreparably “never existed.”

Isaiah Bradley, the first Black Captain America, is the man who survived all of it. All of it. And because he survived it, because he dared to exist, to make a place for himself when the military and the government would have kept him a prisoner, a pet to be commanded and heeled at will, he’s as much a part of Sam’s Captain American legacy as Steve is, if not more so, even if Sam doesn’t know it yet.

Truth: Red, White & Black was originally supposed to be a “What If?” but Marvel—back when they occasionally did the right thing—realized how important the story was and retconned it into main continuity. A lot of comics readers, unfortunately, haven’t treated it as essential; it should be. It is. If you didn’t know about it, now you do. If you know about it but haven’t read it, what are you waiting for?  If you’ve read it, tell your friends. There’s more than imperfect soldier who was a good man. Time for everyone to lean his story.