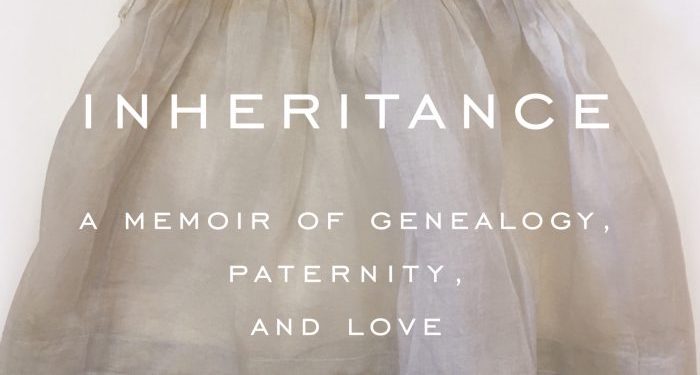 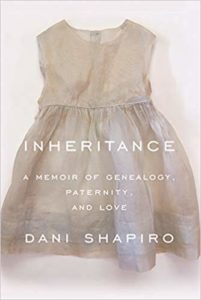 I recently read Dani Shapiro’s memoir Inheritance: A Memoir of Genealogy, Paternity, and Love.  While the writing is beautiful, I struggled to connect to the central conflicts of biology, identity, and family.

I find it difficult to critique memoirs because they are so personal. It feels like any negative commentary on the work is necessarily a negative opinion of the writer as an individual. Memoirists-—writers—humans have a right to whatever emotions they feel about the particulars of their lives. This isn’t a criticism, but rather a response.

Although I don’t have a lot in common with Shapiro, I found it very easy to connect to her in her previous work. I particularly loved Hourglass, her book of reflections on time and memory interwoven with stories from her marriage. My love for Hourglass inspired me to get on my library’s waiting list for Inheritance as soon as it was published.

In Inheritance, 54-year-old Shapiro discovers that her father (now deceased) was not her biological father. This throws her into a tailspin of questioning her identity, her family relationships, and her cultural heritage. On the surface, this sounds like a shocking discovery that would throw anyone into an identity crisis and cause major rifts in family relationships, but the particulars of her situation are far more benign. Shapiro is not the product of a secret adoption or an illicit affair. The secret of her paternity is quite simple. Her parents had difficulty conceiving. They used a sperm donor at a time when such a thing was very uncommon. And they never told her.

While I can appreciate that Shapiro would have liked to know this information growing up, especially as it relates to medical history, I don’t think it’s all that strange that her parents wouldn’t have discussed the particulars of her conception with her. Her parents wanted a child and could not conceive. So they used medical technology to have a child who they loved and raised together. And yet, the sense of betrayal and confusion Shapiro seems to feel is intense.

Shapiro also experiences a crisis about her Jewish heritage. Although she no longer practices, she was raised within the Orthodox Jewish tradition. It is a cornerstone of her cultural identity. I could understand her being shaken to discover that she wasn’t really Jewish, but that isn’t the case. Since Shapiro’s mother was also Jewish, she did not lose her claim to Jewish heritage. In fact, Judaism is matrilineal. She would always have been Jewish because of her mother, regardless of her paternity. So finding out that she was not biologically her father’s child did not change her Jewish heritage.

Shapiro’s strong response puzzled me. Although she writes repeatedly about how she feels, she doesn’t (to me) adequately explain or explore why she feels this way. She seems to take for granted that most people, upon hearing such news, would have a similar reaction. Now I wonder, am I in the minority here? Am I the only person who genuinely believes news like this wouldn’t affect me much?

Category ID: 479
Category ID: 867
True Story Newsletter
Sign up for True Story to receive nonfiction news, new releases, and must-read forthcoming titles.
Thank you for signing up! Keep an eye on your inbox.
By signing up you agree to our terms of use

Of course, I have not been in this situation, and I do not think there is a right or a wrong way to respond. But I truly believe that if I found out today that I was conceived through sperm donation, I would shrug my shoulders and say, “Wow. Weird.” And then move on with my life. To me, family is much more about who has invested in a relationship with me than who shares my DNA.

This got me thinking about my connection to my family and how that relates to my perception of identity. I realized that biology carries less weight for me than it does for many people. Perhaps this is because the man who raised me is not my biological father. Granted, I have always known this. But my father is my father because he took care of me and my siblings. He provided for me, taught me, encouraged me, and disciplined me. I know who my biological father is, but if you ask me about my dad, I will tell you about the man who raised me. If I were to find out that my biological father was a different man entirely, a third person who has never been part of the equation, I don’t think it would change who I am or who I call my father.

I’ve realized that the relative unimportance of biology to me can and does affect how I live my life. I remember a friend’s surprise when I told her that the guest list for my small-ish wedding didn’t include some of my aunts, uncles, and cousins. This wasn’t a spiteful decision. I just hadn’t seen some of my family members since I was a child, and I wanted to save my limited invitations for people I had a close relationship with as an adult. It shocked my friend that I wasn’t inviting them just on principle. I value my relationships deeply. But I feel no need to pretend to have a deep connection with family members simply because of shared genetics.

My reaction to Inheritance also led to some interesting conversations with my husband about what defines a family and the ways in which we are bound to each other. Even though I don’t share Shapiro’s experience and did not relate to her emotional response, Inheritance still struck a chord in me. It led me to examine my own values and beliefs about family. And it challenged me to consider what things I hold sacred to my identity.