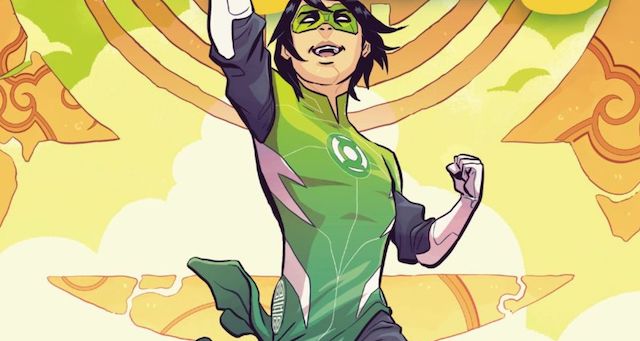 In the past few months, DC fans have been lucky enough to get to know two new Green Lanterns: Tai Pham, the star of the DC Kids graphic novel Green Lantern: Legacy by Minh Lê and Andie Tong, and Sojourner Mullein, the lead in the Green Lantern: Far Sector miniseries by N.K. Jemisin and Jamal Campbell, from DC’s Young Animal imprint. Superhero franchises like to milk their established characters for all they’re worth, so I was struck by the introduction of not just one but two new Lanterns in such quick succession, and in such prominent vehicles. Not only do these new books bring new formats and genres to the Green Lantern franchise, they both feature protagonists of color from creators of color—something that I hope is part of a fundamental shift in the way Green Lantern books overall approach diversity.

Green Lantern has always been a…complicated franchise when it comes to race. On the one hand, it is the home of DC’s first African American superhero, John Stewart, and the source of the most well-known anti-racist panels in comic book history. On the other hand, not only has the franchise made severe missteps over the decades, it remains spearheaded by Hal Jordan, an iconically conservative character with an infamously reactionary fanbase. 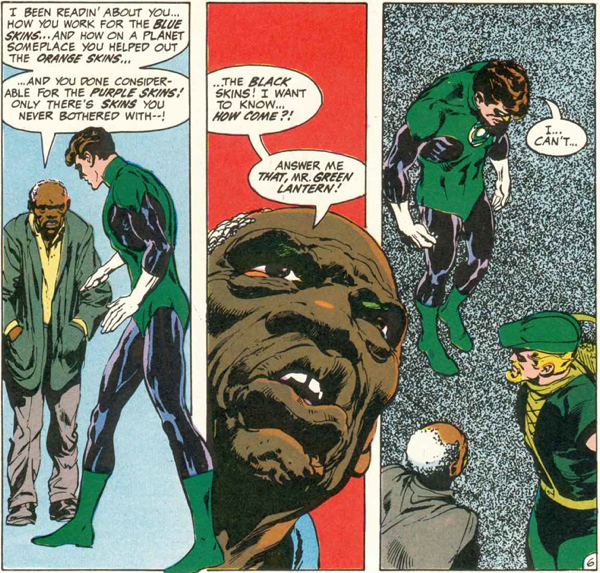 I’ve written before about how Hal Jordan represents a particular type of old school, exclusionary whiteness, so I won’t reiterate it here—not least because I’d rather talk about these great new heroes than ol’ Highball. But I think it’s worth noting that even though four of the six Green Lanterns from Earth are POC, it’s Hal who gets to hold down the main Green Lantern title. As of February 2020’s solicits, John Stewart and Jessica Cruz continue to appear in Justice League and Justice League Odyssey respectively, but Simon Baz and Kyle Rayner are nowhere to be seen. Meanwhile, DC is reprinting several of Hal’s previous adventures to go along with his starring vehicle in Green Lantern: Season Two.

But Tai and Jo exist in their own spheres, in separate imprints from the main DC universe, and it’ll take some doing to displace them with Hal. So let’s talk about their books! 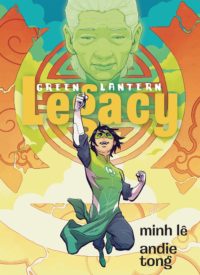 In Green Lantern: Legacy, we meet Tai Pham, a middle schooler who lives with his parents and beloved grandmother, who immigrated from Vietnam during the war. When she dies, Tai inherits her jade ring…and suddenly discovers that his grandmother was a member of the intergalactic Green Lantern Corps, and that her ring has chosen him to follow in her footsteps. As Tai copes with grief and grapples with his new powers, he also faces off against racist vandals in his neighborhood, gentrification, and exploitative CEOs. The elegance with which this slim little middle grade graphic novel tackles a host of complex social issues is impressive.

A lot of the DC Kids line has focused on younger versions of established DC characters like Clark Kent or Dinah Lance, so I asked Minh why he chose to create a new Lantern when there was already a whole Corps to choose from. It turns out that that plethora of Lanterns was actually one of the reasons: “Part of what drew me to the Green Lantern universe is that there are already so many Green Lanterns,” he said. “Rather than reinventing an already existing character, I liked the idea of creating an original character that could fit into this already rich world. My hope in creating a new character was to add a new spin while also honoring the spirit of the existing stories and characters.”

That new spin comes not just from the fact that this is the first Green Lantern title for kids in literal decades, but the way Legacy is immersed in a neighborhood that feels real and lived in. GL books tend to be cosmic and thus disconnected from Earth-bound communities, though we’ve seen brief exceptions with John, Kyle, and Simon. Much of Legacy’s groundedness comes from Andie’s art.

“Minh and I worked together to try to come up with a unique world-building experience,” he said when talking about working on the book. “We drew from our Asian upbringings, and tried to incorporate subtle references to what living in an Asian household would be like.” 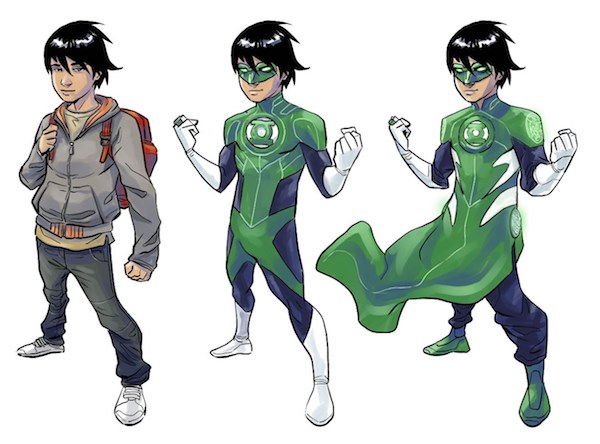 Another hugely grounding element is the strong relationship between Tai and his grandmother. Female mentors in superhero stories are incredibly rare, especially with male proteges, so I loved seeing it here. Minh explained that Tai’s grandmother was actually inspired in part by his own: “She always wore a jade ring and is one of the heroes in our family story (trust me, you would not want to mess with her). So once that image appeared to me, the story about a young boy who follows his grandmother’s footsteps as a Green Lantern started to fall into place.” (Her costume, by the way, as well as Tai’s final costume in the book, is inspired by the traditional Vietnamese Ao Dai.)

Much like young DC fans of the 2000s were introduced to the Green Lantern mythos via John Stewart, young comic readers today will probably encounter Tai before any of the grown-up Lanterns, and that’s a really lovely thought. “My hope is that readers emerge from the book with a broader conception of who gets to be a hero,” Minh says. “Coming from a family of immigrants and refugees, it took a while before I fully grasped the heroism that was already embedded in our family and community history. So if Green Lantern: Legacy helps people take a closer look at the real heroes in their daily lives, then my heart will be full.” 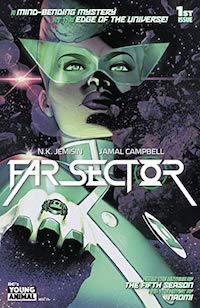 Meanwhile, on the other side of the galaxy, in a very different kind of story, we have Sojourner “Jo” Mullein and Green Lantern: Far Sector, a miniseries by the multiple Hugo Award winning writer N.K. Jemisin and artist Jamal Campbell, who has worked on a variety of books across Marvel and DC, among others. Far Sector isn’t for kids, what with it being a murder mystery that heavily features cannibalism, but like Legacy, it brings us a new character, a new setting, and a new tone.

Shortly after Jo is assigned to the extremely remote City Enduring, bodies start to pile up—an unsettling trend anywhere, but especially on a planet that hasn’t had a violent crime in 500 years. Cut off from the rest of the Green Lantern Corps, she has to navigate the complex political dynamics between the three alien races who populate the City Enduring, which is made more difficult by the fact that City dwellers have normally eradicated emotions—but a raging drug epidemic has brought all those unruly feelings back. 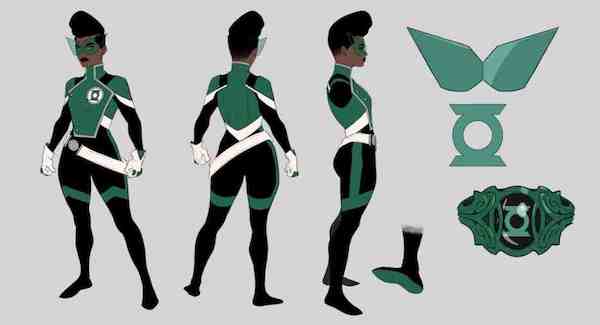 Jo design by Jamal Campbell. I cannot WAIT for the cosplay.

It’s a highly speculative conceptual mix that feels more like classic science fiction than a traditional capes and tights book, or even the “elaborate military maneuvers in space” sub-genre that GL books often veer off into. Campbell’s gorgeous art adds to this feeling, marrying fantastic otherworldly settings with noir-ish back alleys and gruesome crime scenes. (And if you’re like me, the fact that Jo’s design is visually based on Janelle Monae will add an automatic futuristic funk soundtrack as you read.)

We’re only two issues into Far Sector as of this writing, but Jo and her unique combination of otherwordly setting and gritty noir are bringing something new to the Green Lantern Corps, and I can’t wait for issue #3. 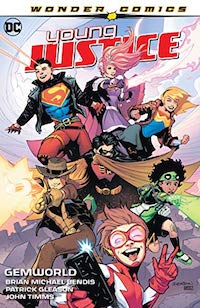 Keli is on the bottom right, looking typically cute but non-prominent

While we’re on the subject of diverse new Green Lanterns, I also want to point out that the new Young Justice series from Wonder Comics introduced Keli Quintela last year, an 11-year-old Bolivian girl who hacked into a Green Lantern power battery and subsequently dubbed herself “Teen Lantern” (even though she’s technically not actually a teen). We need more Latinx characters in comics, especially little girls who are into STEM, and I’m pretty sure Keli is actually DC’s first character from Bolivia, full stop. On the other hand, it’s an ensemble book and all six of her teammates are white, as is the creative team, so she feels significantly less revolutionary.

Tai’s story is a one-shot and Jo’s is a limited series, but because of the positioning of their imprints (and in Jo’s case especially, the fame of her writer), they have the chance to reach a wider audience than a character introduced in the ordinary monthly march of the traditional comics publishing schedule. I hope these books make the splash they deserve to on the mainstream market, and I’d love to see their stories continue outside of their original vehicles. But more importantly, I hope they encourage DC to continue to show that anyone can wear the ring. Because everyone deserves the chance to see themselves as the hero.