A couple of weeks ago, I went down to the New Orleans area to do some writing at Daniel José Older’s magical creative retreat, The Launch. Why go so far? I always write a lot when I’m in that part of the country. This time, for example, I took two chapters of a novel I’ve been working on for ten years in spurts, having never gotten beyond rewriting those two chapters again and again and again, and…I came home with a finished first draft (most of an 82 page notebook, using both sides of the page) and a list of revisions to get me start on the next version. I was only there for five days. 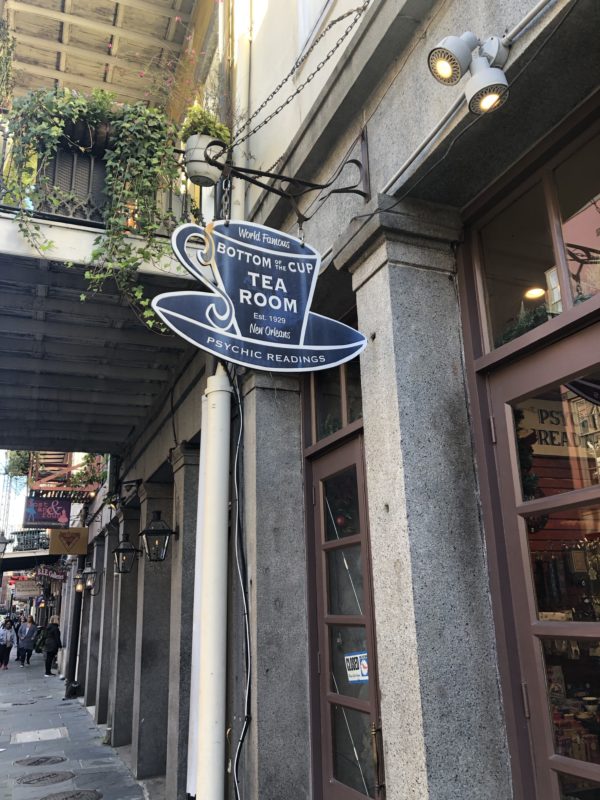 I spent the majority of my time at the house but honestly, New Orleans is only 30-ish miles away and I have an affinity for that city I simply can’t explain, so I gave myself a day in the Crescent City (it’s all research. Ann Leckie said so). One of my stops was The Bottom of the Cup Tea Room which, at 90, is the oldest continuously operating psychic institution in the United States.

I went to have a psychic reading done. 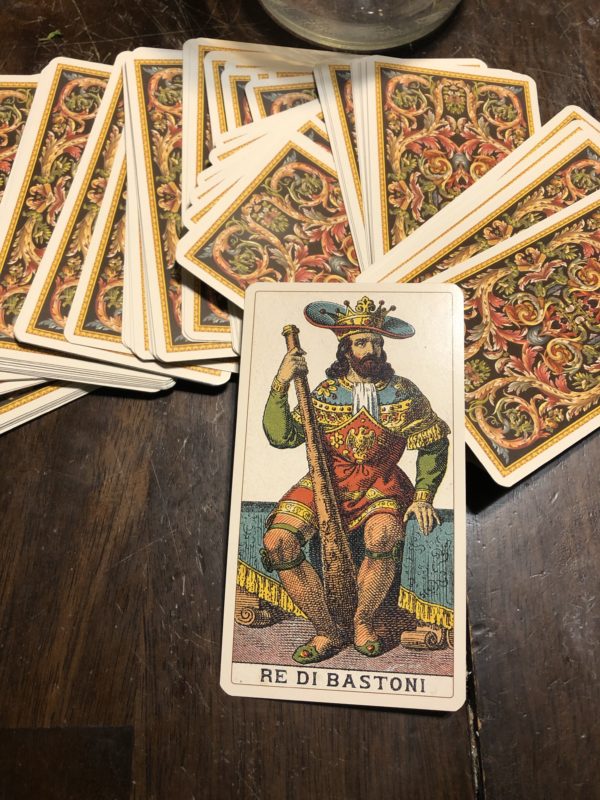 As someone who leans skeptical most of the time, it was an odd, if interesting, choice of activity. If you’ve ever been to New Orleans though, you know there’s something very special about it, something, dare I say it, magical. You believe things inside the boundary you wouldn’t believe anywhere else and as author Alys Arden, a city native who happens to have worked at the Tearoom as a teenager, told me when I interviewed both her and Kami Garcia about Teen Titans: Raven, wherever you walk the ghosts walk with you.

All this to say I had a tarot reading in New Orleans. I won’t go into the details but I will say the experience reawakened my interest in the myriad tarot decks available and the amount of absolutely gorgeous art born from them, especially the art that falls into “geeky” parameters. Whole decks, unfortunately, are extremely time consuming to design and very expensive to print, so many artists have compromised by creating tarot influenced prints. Take a look: 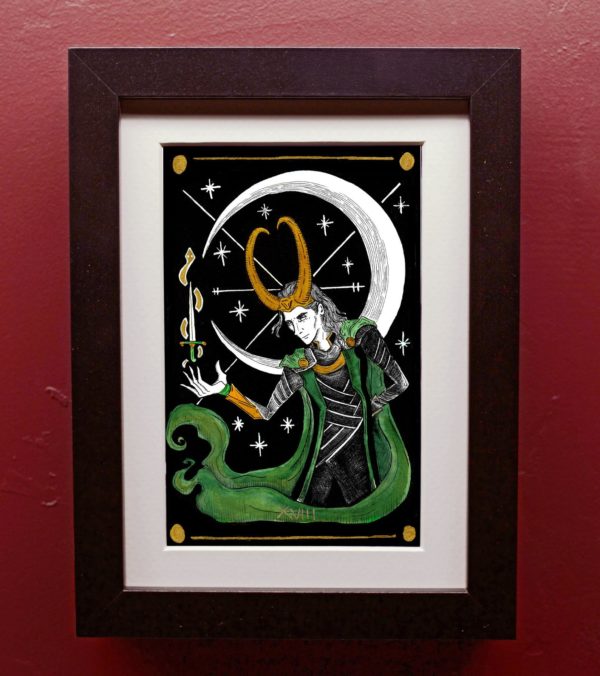 Changeable, variable Loki seems a good match for the moon. The artist hasn’t assigned an actual card to this print, but I think the Knight of Swords is a good match: determined, strong sense of self, quirky, offbeat sense of humor, distinctive dress, intelligent, and ready to fight. The Knight likes to cause drama and then leave others to clean up the mess. Drawing the Knight of Swords during a reading is a warning to expect the unpredictable, dramatic, and unexpected. The reversed meaning: stress is high and your Knight thrives on the drama; he may let you down but odds are, because he’s good at talking his way out of trouble, you’ll be back. 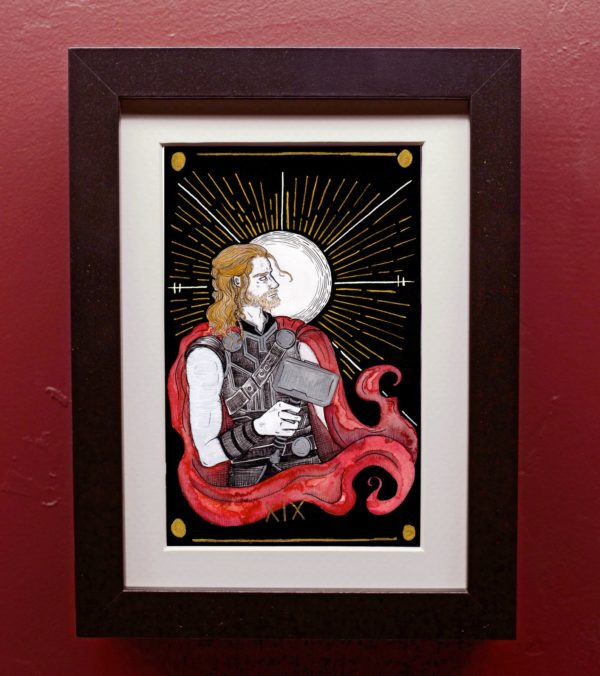 Where there’s night, there must be day, and where there’s Loki, you’re apt to find Thor. Constant, heroic, a bit arrogant but with good intentions, Thor’s personality synchs up pretty well with The Sun card. Facing difficult challenges but knowing he’ll survive them, quick to recover from injuries, Thor is also suited to the association of The Sun with the importance of friends and family. It can signal a reunion with an old partner (hmmm…) and being content in the home you have (“Asgard isn’t a place. It’s a people). 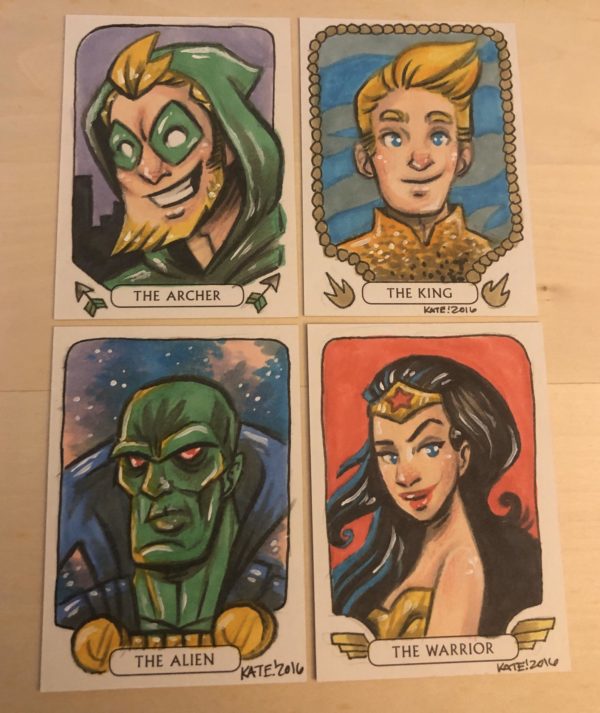 These are just too cute for words. Hand drawn, these sketches were the basis for a licensed DC tarot deck (by Cryptozoic). There definitely aren’t Aliens or Archers in more traditional decks (there are knights and kings) but I love how the cards were tweaked to work with the art and theme. 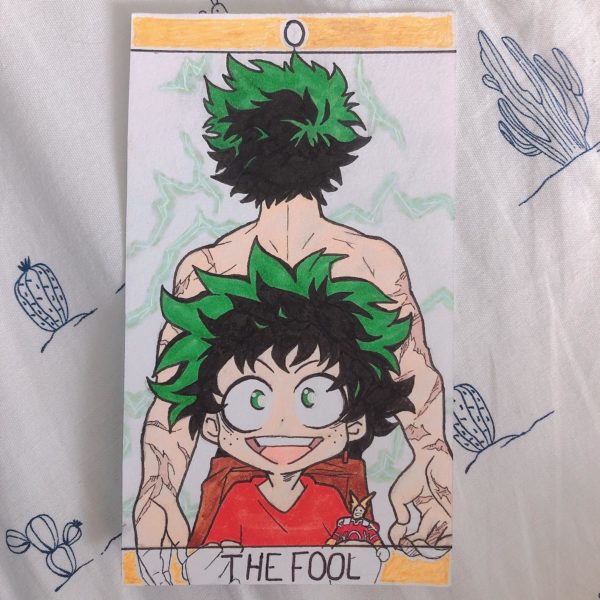 Neversunnyin will create a custom BNHA card for you with your choice of character and suit. I love this idea, both from the artistic perspective (getting something you love) and the tarot aspect: many people feel that tarot doesn’t predict your future so much as it gives you specific aspects of your life on which to meditate, a sort of guided tour of circumstances and options. Creating your own card is sort of like crafting your own mantra to help keep you focused on what you feel is most important during a given time period.

This is only a tiny sampling of the tarot art out in the world, both geeky and non, and if you have some time, I’d urge a google search, if for no other reason than to experience the breadth of influences on different decks or even within decks. You’ll know when you find the right one.

Card interpretations are from The Ultimate Guide to Tarot by Liz Dean.

Sign up to The Goods to receive emails about new products and promotions in the Book Riot Store.
Thank you for signing up! Keep an eye on your inbox.
By signing up you agree to our Terms of Service
Enter to win a $50 gift card to Barnes and Noble!